Apple CEO Tim Cook waved a magic wand in front of America on Tuesday, vanishing our outrage over how shamelessly companies avoid paying taxes, leaving the rest of us to foot the bill. As a public service to you, here is a chart that should enrage you about corporate tax rates all over again! (Story continues below chart of RAGE.) 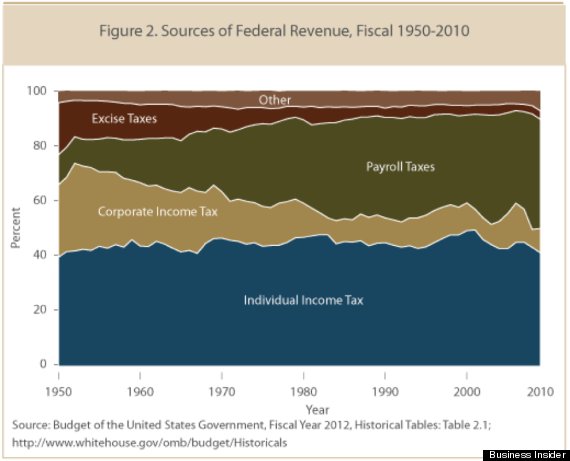 What this shows is how dramatically corporate tax contributions have shrunk in the past several decades, and how our personal taxes have risen to fill the gap. Payroll taxes now make up 35 percent of all federal government tax receipts, up from 11 percent in 1950. Corporate income taxes, meanwhile, now make up less than 10 percent of federal revenue, down from about 26 percent in 1950.

To 'splain those numbers a little more clearly: We who are on the payrolls of companies now bear way more of a tax burden than those companies bore decades ago. Those companies, meanwhile, bear less of a burden than we ever did.

And this doesn't include individual income tax, which accounts for about 46 percent of total federal tax receipts, roughly the same as 60 years ago.

Update: This chart of course does not reflect the fact that employers typically cover half of the payroll taxes collected by the government. Assuming companies pay half of the payroll taxes in this chart, the total tax burden for individual Americans is reduced to about 63 percent of total federal revenue, instead of 81 percent, as I estimated in an earlier version of this story. But that is up from about 45 percent in 1950.

And the total corporate contribution to federal revenue, including employers' share of payroll taxes, has dwindled from 32 percent in 1950 to about 17 percent today. Employer contributions to payroll taxes make the unfairness of the tax code slightly less unfair, but the trend is still clear and dramatic: Corporations are paying a lot less than they used to.

This chart was produced for a September 2012 report (download-y PDF file) about corporate tax avoidance by the Senate Permanent Subcommittee on Investigations. Walter Hickey of Business Insider helpfully republished the chart on Tuesday, in honor of Cook's testimony before the same subcommittee. Update: The Senate lifted the chart directly from an earlier Tax Policy Center report about the sources of government revenue.

Cook was there to techsplain how Apple holding $102 billion of cash offshore isn't really tax avoidance so much as good old fashioned ingenuity. Also, have you forgotten the shiny objects Apple makes (including the dreamy MacBook Air on which this here story was typed)? By the end of the hearing, Sen. Rand Paul (R-Ky.) had demanded that Congress apologize to Apple for the inconvenience, and Sen. John McCain (R-My Lawn) was reduced to gently jibing Cook about how often he has to update his apps.

And Rand Paul is kind of right, you guys, as is Tim Cook: We should not be so mad at Apple for doing what the law allows. We should be mad that the law allows Apple and other companies to keep billions of dollars of cash offshore and out of the government coffers, where it could be helping the unemployed and our crumbling infrastructure and such. Another thing we can get mad about is how the "corporate tax reform" that Cook and other corporate leaders are always banging on about will actually serve to make it so companies pay even less in taxes than they do now.