Openness to the global economy has gained many detractors as a result of the 2008 global financial crisis and subsequent recession. People are unnerved by the volatility of capital flows and worried that their jobs may be outsourced. Yet more countries than ever before are playing on a global stage--and benefiting economically as a result.

A new report from the McKinsey Global Institute and the McKinsey High Tech Practice finds that five types of global flow--goods, services, finance, people, and data and communication--increase global GDP growth by between $250 billion and $450 billion a year or 15 percent to 25 percent of global GDP growth. And the most connected country will see 40 percent more of that benefit than the least connected country. For example, Thailand, which is highly connected to global flows, will disproportionately benefit compared with its neighbor Laos, which has a low level of connection.

After a pause in the aftermath of the financial crisis, global flows are once again expanding (with the notable exception of financial flows, which remain almost 70 percent below their pre-crisis peak) and accelerating as increasingly prosperous emerging economies become more engaged in cross-border commerce and exchange, enabled by the rapid spread of digital technologies. But the participation of countries varies enormously. To provide a snapshot of this evolving landscape of connections, we developed the McKinsey Global Institute Connectedness Index, which looks at 131 countries across the five main flows in 1995 and 2012.

By looking at connectedness to all the major flows--rather than just manufacturing exports--we obtain a truer picture. And, importantly, the MGI index differs from others because it corrects for the size of country. If we don't do this, a large diversified economy looks relatively closed because flows are a modest share of GDP, and smaller countries' connectedness is exaggerated because their flows are a higher share of GDP. 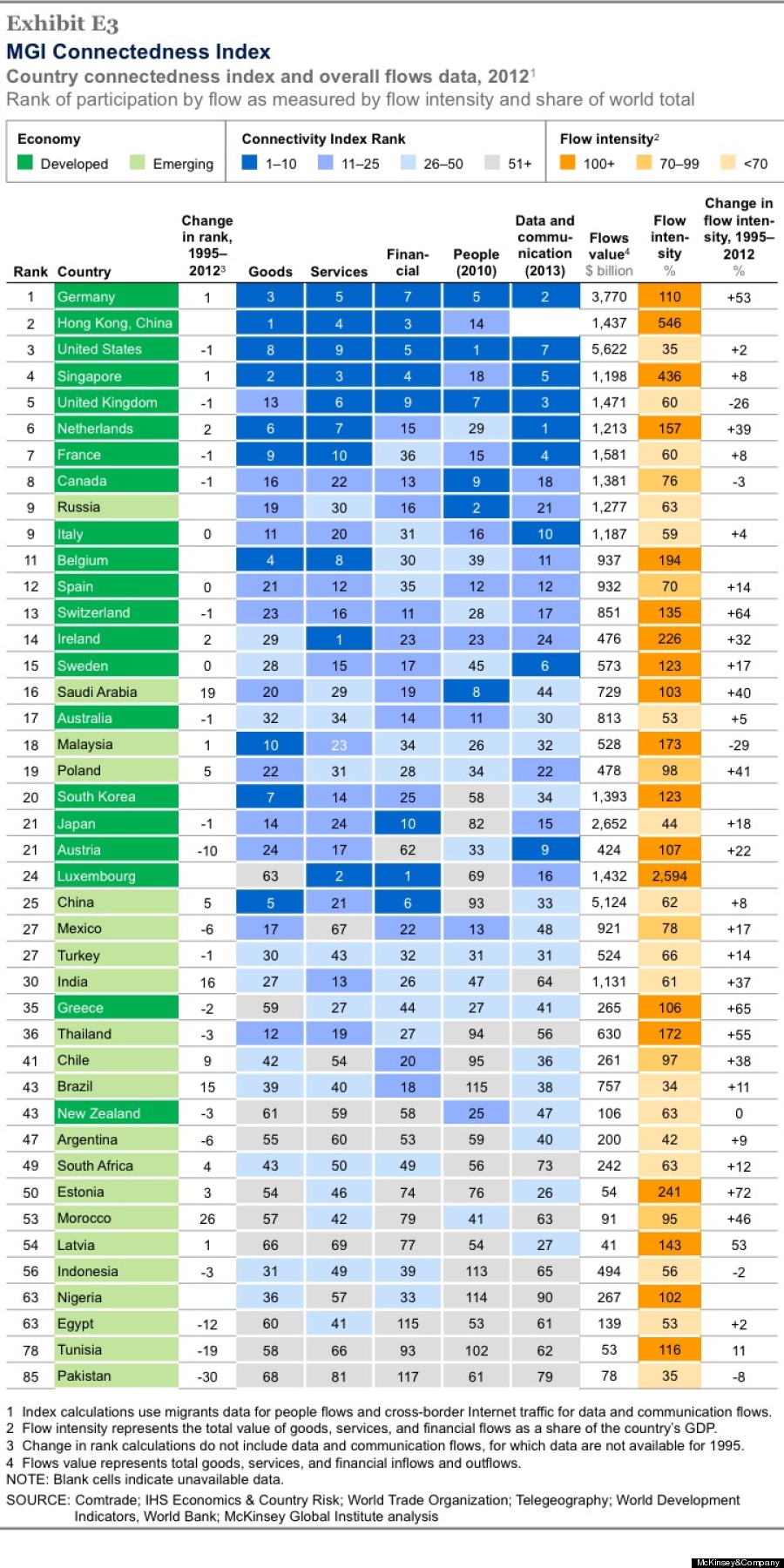 The index reveals some surprises. Who knew that South Korea and Japan, the two established Asian manufacturing export powerhouses, overall rank at only 20th and 21st respectively, lower than most of Europe and the United States and even Saudi Arabia, Malaysia and Poland. The reason is that both countries remain relatively closed to immigration and low on cross-border Internet traffic. China, for similar reasons, ranks only 25th on the index.

Perhaps surprisingly, the United States is no longer the world's most connected economy--those laurels go to Germany. Germany ranks first and the United States third with two smaller economies--Hong Kong and Singapore--coming in second and fourth. The index shows that the trade intensity of the United States--the value of flows relative to the size of its economy--is only one-third of the intensity of Germany, and one-half that of China.

As emerging markets become increasingly important as both consumers and producers--they now account for 38 percent of global flows, nearly triple their share in 1990--they are climbing up the connectedness rankings. Morocco gained 26 places between 1995 and 2012, the most of any of the top 75 countries in our index, reflecting the government's aggressive efforts to position the economy in both goods and services to serve the large European market. India gained 16 places in this period, largely reflecting its huge exports of services. Brazil jumped 15 places, reflecting growth in services and financial flows.

China comes in at 25th place, and India is ranked number 30 in 2012. China is in the top ten of countries on flows of goods and finance, the latter reflecting the massive foreign exchange reserves it has been investing overseas as well as huge amounts of foreign direct investment. But China is low on people flows and relatively low on cross-border data connectivity and Internet access. On services flows, China ranks only 21st compared with India's 13th.

Other economies have dropped down the rankings, largely reflecting a retrenchment in financial flows. Argentina dropped six places reflecting a retrenchment in financial flows after the peso peg with the dollar broke in 2002 followed by a default on government bonds. Austria, which had been a gateway to capital flows from the European Union into Eastern Europe, fell 10 places as capital fled eastern European economies during the euro and sovereign-debt crisis. Pakistan plunged 30 places as capital fled the country on political concerns.

Overall developed economies tend to be more connected than emerging markets with an average rank of 21st versus 77th. That gap is most marked in the case of flows of data and communication where the comparative rankings are 19th versus 77th.

Flows of goods, services and finance reached $26 trillion in 2012 or 36 percent of global GDP--1.5 times as large relative to GDP as they were in 1990. If the two forces of rising prosperity and digitization continue or strengthen in their impact, global flows could nearly triple by 2025--and add up to $500 billion a year to global GDP.

For all the misgivings of citizens about full-blooded participation by their countries in the global economy--and the undoubted need for governments to help those who may be disadvantaged--the evidence shows that the more open economies are to the worldwide web of flows, the greater the economic benefits. There is, therefore, a clear economic imperative to join the party. The penalty of being left out or left behind is rising.