Whether you go into a relationship, marriage, worship, business, teaching, service or any adventure, your success in 2013 will be determined by the faith you have, and your commitment to the venture. 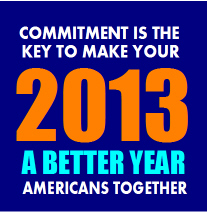 If you go in with an attitude of trying out, more than likely the following will happen: A few things will go wrong, or hurdles will come up, and in response you shake your head and say, "I knew it was not going to work out." What do you do then? Instead of making it work, you will be spending your energy back peddling, and finding "reasons" to back out. Indeed, it is time to ask, "If I fail myself, why should God and others give me a pass?" You have to have faith and commitment to succeed.

Years ago, we were driving over the Royal Gorge Bridge in Cannon City, Colo., a very tall bridge for an acrophobic person like me; indeed, my legs froze that day, and I still get the nightmares about it followed by a new lesson each time. What happens if the bridge collapses? I see myself hanging on to the railings of the broken bridge with one hand, down below is an endless pit, and up above is the noise of the breaking bridge, with an imaginary clock winding down: 15 seconds to a total collapse.

I have many choices in those 15 seconds: curse the engineers, blame Colorado bridge authority, blame the car for not flying out to the other end, and of course blame myself for taking that trip, or simply have faith in God and figure a way out of it. I usually wake up when I have my arms on the solid ground and my body is dangling down the cliff below, and hearing the massive blast of the bridge banging in the gorge somewhere below. Don't we have this situation in our lives daily?

On the other hand, if you are committed, when a problem surfaces, your attitude will be, "Well, I am Mario of the Game, these hurdles are a part of the game to get to the end point. I am supposed to pass all these hurdles, knock the monsters and overcome the difficulties to get to my point." As you get beat up on the path, but also beat the odds and cross the hurdles, you cheer, and say to yourselves, "A few more to go..." The energy to succeed builds up to pass through the rest of the hurdles to reach the end point and win. I have watched my kids play Mario and have learned quite a bit.

One of the most quoted incidents in history about commitment is burning of the ships in A.D. 711. Tarek Ziyad, the Moorish commander landed his forces on the Mediterranean coast of the Iberian Peninsula with 7,000 troops. He immediately ordered burning of the ships, and said there is no going back, and that was the power of commitment. In the game of football, when the running back has the ball in his hand, no matter how many players pile up on him in a tackle, he is committed to get at least a yard out of it. You can apply this to everything you do in life.

Most successful people that I have talked to, have the same attitude; they are committed to make it happen, and not try.

The following words have changed my life, and I hope they inspire you as well.

"Until one is committed, there is hesitancy ... Concerning all acts of initiative (and creation), there is one elementary truth the ignorance of which kills countless ideas and splendid plans: the moment one definitely commits oneself, then Providence moves too. All sorts of things occur to help one that would never otherwise have occurred. ... Whatever you can do or dream that you can do, begin it. Boldness has genius, power and magic in it. Begin it now."

"If we listened to our intellect, we'd never have a love affair. We'd never have a friendship. We'd never go into business, because we'd be cynical. Well, that's nonsense. You've got to jump off cliffs all the time and build your wings on the way down."

Dr. Abdul Hamid Abusulayman: "There is a clear distinction between doubts and problems. Doubts provoke obstruction, frustration and discouragement, where as problems inspire motivation, action and diligence."

Whether you are an Aborigine, Aztec, Baha'i, Buddhist, Cheyenne, Choctaw, Christian, Hindu, Hopi, Jain, Jew, Maya, Muslim, Native American, Shinto, Sikh, Tao, Wicca or Zoroastrian, you have guidance to live a happier life and the essence of which is embedded in your tradition. You have your own moral compass if you are an atheist or an agonostic.

Think about these seven things to guide you to successfully coast through 2013, and add your own to the list.

1. Tying the loose ends of life, bringing a closure to every little thing.
2. Volunteering to serve others with no expectations or returns.
3. Living within the means.
4. Meditation for five minutes a day in the bus, train or in the car.
5. Every word you use must build relationships and not hurt it.
6. Apologize for the mistakes, truthfulness is empowering.
7. Forgiving liberates you and lowers your blood pressure, whether the one you hate is around or not.

Whatever you do, do it wholeheartedly. There is a joy in it for you and the ones who receive the good from you. The bottom line is quit griping about life, just enjoy what you got, change what you can, reject what you must, but go on with life. It will change your perspective and life becomes meaningful.

Fifty years ago, my little brother always came up with a stomach ache whenever he was asked to go to market and bring vegetables. But when my Dad threatened him with cutting his allowance, he would then get up and go. We always wondered if he was going to go anyway, why the drama? Neither he was happy, nor my parents. Later on he got the idea that doing things wholeheartedly makes him a winner and everyone around him rejoiced as well. All of us learn our lessons. It happens to us daily, we have to be conscious in creating happy environments around us.

And now, as a member of the society, we have to do our share in building a cohesive Society, where no American has to feel apprehension, discomfort or fear of the fellow American. No matter where you live, the dreams and aspirations are the same: to live freely.

All our work is about contributing towards a better society; mitigating conflicts and nurturing goodwill, in 2013, we need your support to do more things including conducting workshops, lectures and seminars to do our share of good in the society.

In promoting pluralism, in 2012, 48 articles have been written in Dallas Morning News, 21 in The Huffington Post, and altogether 375 pieces in a variety of magazines and newspapers around the world. Eleven appearances on Sean Hannity, nine on local TV, 16 on national radio networks, two major events, the Unity Day USA, and spoke at innumerable places about the need to build cohesive societies. A film is in the making and the book will be out.

We are committed to religious and political pluralism in America and invite you to journey with us in creating a better America for every one of the 312 Million of us. We are one nation under God with liberty and justice for all.