Since last November, when the English singer Adele posted a track from her latest album, 25, on YouTube, she has sold more than 15 million downloads worldwide. That makes her one of the most famous beneficiaries of the new age of digital globalization.

Yes, globalization. For many people, that word conjures up, at best, images of container ships moving manufactured goods from far-flung factories. At worst, it harkens back to acrid debates about trade deficits, currency wars and jobs moving to China. In fact, since the Great Recession of 2008, the global flow of goods and services has flattened, and cross-border capital flows have declined sharply.

But globalization overall isn't on the wane. Like so much in our world today, it has reinvented itself by going digital. Just flip open your laptop or check your smartphone and there it is, appearing as easily as Adele's signature song, "Hello." And this 21st century globalization is touching more people, in more places and in more ways than ever before. 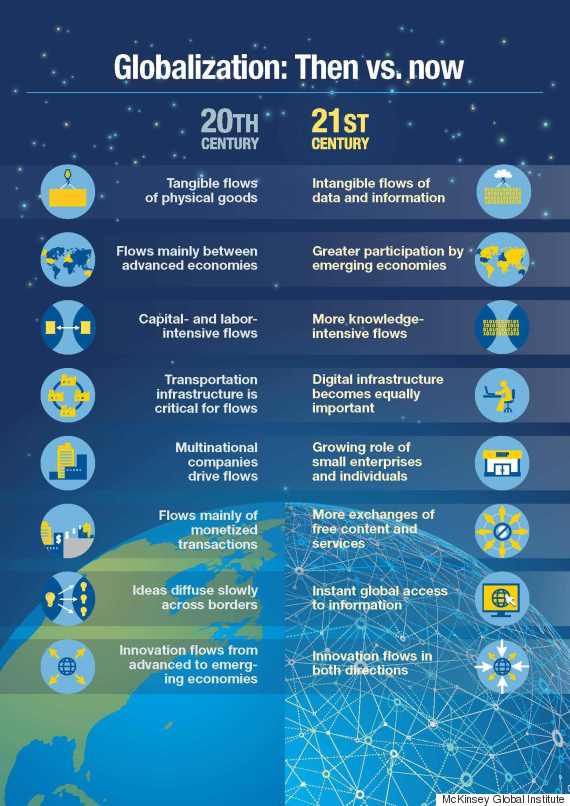 Just 15 years ago, cross-border digital flows were almost non-existent. Today, they exert a larger impact on global economic growth than traditional flows of goods, which developed over centuries.

Digital flows are seemingly everywhere. Music downloads are just one variant. A multinational energy company can monitor production remotely by installing sensors on its oil wells around the world. A manufacturer in Spain can buy components from a Chinese supplier on Alibaba -- or use 3-D printing to produce the parts from a digital design file transmitted from Canada. A girl in Kenya who logs on for a personalized math lesson from the California-based Khan Academy is now part of the story, too. So are the thousands of Syrian refugees who turn to Facebook to guide their journey to Europe.

Overall, the usage of cross-border bandwidth has soared 45-fold since 2005. All flows together have raised global gross domestic product by 10 percent over the past 10 years, worth $7.8 trillion in 2014. Data flows alone account for $2.8 trillion of that -- more than any other type of flow. And it is estimated that this flood of data, information and content will increase by another nine times over the next five years, as web searches, video downloads, e-commerce transactions and intra-company traffic -- to name just a few of the types of digital interchange now possible -- continue to surge.

This new age of globalization differs from the 20th century variety in a number of important ways. It is knowledge-intensive, rather than capital- or labor-intensive. It requires good broadband connections more than vast shipping lanes. Much of it is intangible. Most powerfully, digital flows open up the global economy to anyone with an Internet connection. That reduces the barriers to entry and changes old rules about how business is done -- and who can participate.

You no longer need to be a big, well-capitalized multinational company to compete globally. Thanks to digital platforms such as Alibaba and Amazon, even small-scale entrepreneurs can connect directly with customers and suppliers around the world, transforming themselves into "micro multinationals." Today a weaver in Africa can find customers for her handiwork in Europe by posting pictures on Etsy; 30 percent of sales on this online marketplace for artwork and crafts are now cross-border. On Taiwan's Pinkoi, 20,000 independent artists and designers offer their wares online. Amazon hosts 2 millionsellers and Alibaba provides a digital platform for 10 million merchants. Facebook estimates that 50 million small businesses are on its platform, up from 25 million in 2013; on average, 30 percent of their fans are from other countries.

The share of U.S. trade conducted by large corporations has already dropped from 84 percent in 1977 to about 50 percent in 2013. Meanwhile, we found in a survey that 86 percent of tech-based startups had already conducted at least one international transaction. Overall, business-to-business e-commerce across borders has grown to an estimated $1.8 to $2 trillion per year.

It is not just companies who benefit; individuals everywhere do too. Digital flows are empowering, by providing new ways to learn, collaborate and work. An estimated400 million people have posted their professional profiles on LinkedIn -- showing their skills to employers in more than 200 countries. More than 40 million people around the world are registered on freelance platforms such as Freelancer.com, Upwork and sites in other countries with different names but similar purposes; if you're looking for a plumber in France, frizbiz.com might be the place to look. More than 900 million people have international connections on social media.

This 21st century globalization potentially portends some geopolitical shifts, as countries redefine their roles in the global economy. The U.S., long an engine of global consumer demand for imported goods, is the world's leading producer of digital platforms and content. In the 20th century version of globalization, the U.S. was sometimes at a disadvantage because it couldn't always compete with low labor costs elsewhere. But the new version plays to its strengths in technology and innovation; in every region of the world except for Europe, the U.S. today accounts for more than 50 percent of online content consumed. 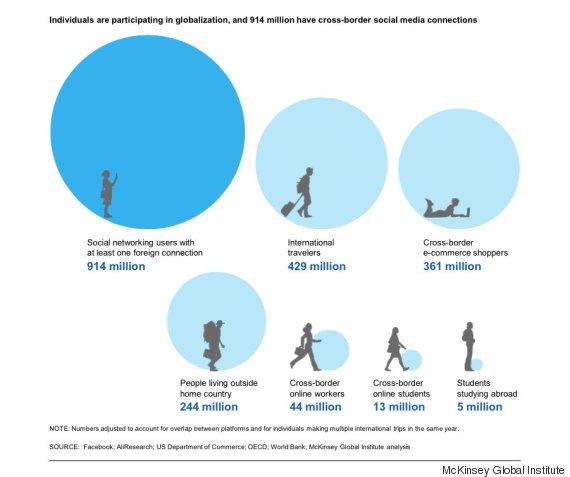 At the same time, this new era provides greater opportunities for emerging economies, who were sometimes left behind in the previous wave. Companies based in developing countries can today overcome constraints in their local markets and connect with global customers, suppliers, financing and talent as never before.

The winners will be the well-connected and the digitally literate. Our research shows that the most digitally-connected countries are reaping the greatest benefits from global flows. That means investment in infrastructure, education and skill training are more important than ever. For companies, countries and individuals everywhere -- not just Adele -- the opportunities created by digital flows beckon, waiting to be seized.

Jacques Bughin and James Manyika are directors of the McKinsey Global Institute based in Brussels and San Francisco, respectively. Susan Lund is an MGI Partner based in Washington, DC. They are co-authors of the report, Digital globalization: The new era of global flows.