The language of inequality is not enough to capture the extreme conditions we are confronting across much of the world. Inequality is a distribution, and it has long been present. What matters in the current period is the specific mix of conditions that have made it so extreme and expelled so many from their habitual life.

Extreme conditions often are caused by particular additional factors on top of the more common sources of inequality. For instance, the massive acquisitions of land in foreign countries by about 15 governments and 100 firms since 2006 has expelled small farmers and rural manufacturers from their land. Over 200 million hectares were acquired in this period. These foreign acquisitions are for mining, developing plantations and accessing water. 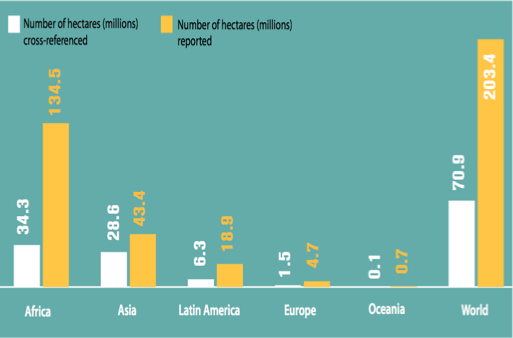 At the other end of the world, we have seen a very different kind of expulsion. From 2004 to 2014, the Federal Reserve estimates up to 14 million residential properties have been foreclosed, with about 13 million households thrown out. Again, this can hardly be captured in the language of inequality. It is, rather, a massive expulsion of people from their homes. It is also worth noting that such foreclosures are now happening in most European countries, especially in Germany. 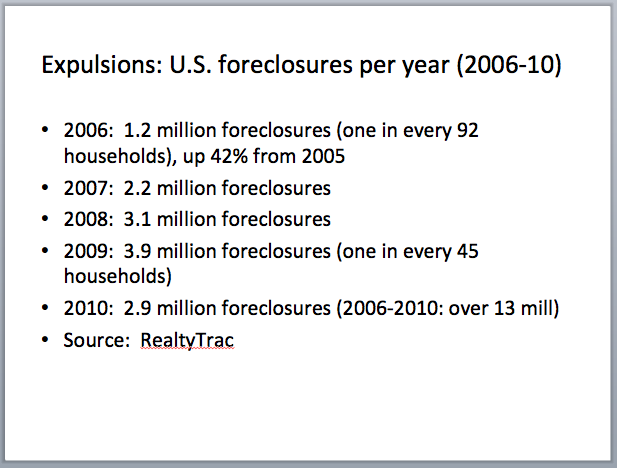 This chart and the other charts appear in Sassen's book, Expulsions: Brutality and Complexity in the Global Economy (Harvard University Press, 2014)

Much of what constitutes daily life today may be more or less the same -- even with a tendency towards growing losses for growing sectors of the population. But what we are seeing over the last decade in many parts of the world is that this ongoing routinized life can coexist with a variety of extreme conditions that are sharpening.

The extreme condition is precisely the one that can often become invisible. The simplest example is that the long-term unemployed disappear from our unemployment measures, as do the imprisoned. Also, the areas with high foreclosures cited above can be quite invisible to the average resident in a city, partly because there is nothing there or little reason to go to such areas -- nobody to visit. Also easily rendered invisible are the vast numbers of rural households displaced by land grabs who leave for the slums of large cities, where they disappear and cease being evidence of that displacement.

I think of these cases as instances of expulsions because they are not simply more of the same. They are sufficiently extreme that the people involved may never go back to normal, so to speak. These cases, and many of the others I focus on in my book Expulsions, tell a tale: the proliferation of the extreme version of often familiar conditions.

Such expulsion dynamics are taking place both in the Global South and in the Global North, even if via different vectors. One juxtaposition is that of the growing numbers of internally displaced in the Global South, and the growing numbers of the imprisoned in the Global North, particularly in countries such as the U.S and the U.K. The "displaced" are mostly never going back "home." Home is now a plantation, a war zone or a luxury gated community. Similarly, many U.S. prisoners increasingly stay for very long stints or circulate between prison and neighborhood, back and forth. It is going to be very difficult to have a normal life in both these very distinct situations. The following chart shows people mostly displaced by war. 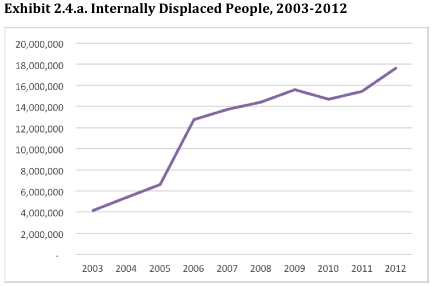 We can add to these types of expulsions the growth of the long-term unemployed in advanced countries. In some countries, such as Greece, almost a third of the workforce is now unemployed. Significantly, they disappeared from all counts, enabling the IMF and the European Central Bank to declare in January 2013 that the Greek economy was back on track. I refer to this as a sort of economic cleansing, playing off the more familiar ethnic cleansing. It is, we might say, the expelling of the unwanted to achieve a positive, even if very partial, outcome.

What brings home this notion of expulsions, rather than simply more poverty, is the growing wealth in most of these countries. Again this goes well beyond distributional factors such as inequality. It points to a disturbing capacity for structural divergence in several key components of economy and society. We have moved towards an economy that can simultaneously benefit some enormously and destroy unusually large numbers of others.

Some divergence has long been part of dynamic economies -- whence Shumpeter's notion of "creative destruction." But this is not what we see in the current period. This is an extreme kind of divergence and an extreme decimation of once prosperous working classes and large segments of the middle classes. To see this in developed countries is alarming. It tells us that the way the advanced economy has evolved is problematic at the structural level, besides the distributional aspect. 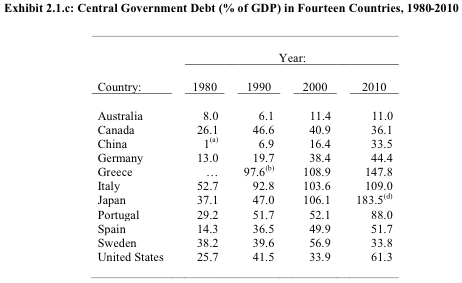 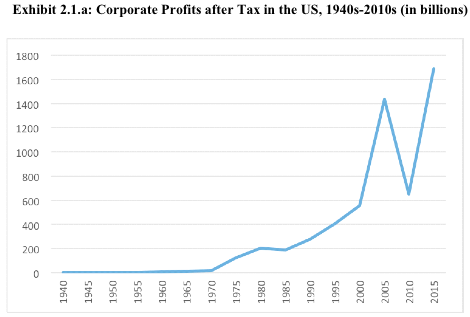 These, and many other expulsions, take on specific forms in each location of the world, and they're in diverse domains: economy, society, politics. Indeed, they are so specific in each place and domain -- and are usually studied in these very specific contexts -- that it is difficult to see that they might be the surface manifestations of deeper trends that today cut across the familiar divisions. For example, experts on the long-term imprisoned in the Global North do not really study the displaced in the Global South and vice-versa. And yet, at ground level, these displacements share a simple, common element: These are people being (usually permanently) cast out of what had been their lives.

Further, many of these expulsions coexist with growth in "the" economy, even if the space of that economy is shrinking. This coexistence of growth (as conventionally measured) and these expulsions further add to the invisibility of those who are expelled from job, home and land.

Many of the processes mentioned here include or incorporate complex forms of knowledge we admire -- notably, advanced mathematics for the algorithms of finance and complex legal innovations to enable the massive land grabs that took off in 2006. I see this mal-deployment of knowledge as a major issue in our current global political economy. It brings to the fore the fact that forms of knowledge and intelligence we respect and admire are often at the origin of long transaction chains that can end in simple brutalities.