BERLIN -- There has been a heated debate over the last few years about if and how we can prevent the world from warming more than 2 degrees Celsius. At the Paris climate conference last year, countries set out an even more ambitious goal -- keeping the world under 1.5C of warming. We know relatively little about the benefits, risks and challenges associated with reaching the 1.5C target, but our knowledge in the area is expanding rapidly. The Intergovernmental Panel on Climate Change is now tasked with mapping out the state of the scientific knowledge on the 1.5C goal in a report due in the autumn of 2018 that is expected to inform future international negotiations. And first, at a meeting this week in Geneva, 60 experts and government officials are coming together to scope that study.

The 1.5C goal is elusive

There are many open scientific questions around the costs and benefits of keeping global warming below 2C versus 1.5C that will need to be addressed by this special report. Whether we can feasibly reach 1.5C -- and how -- will be the most important.

Many experts see a growing dissonance between the increasing ambitions of climate policy and the lack of success in achieving sustained emission reductions today. So far, there is no track record for reducing emissions globally. Instead, greenhouse gas emissions have been rising at a faster pace during the last decade than previously -- despite growing awareness and political action across the globe.

The remaining net amount of CO2 that can still be released to the atmosphere in order to keep temperatures rise below 1.5C is close to zero. Even in the most optimistic case, it will not take longer than five years to exhaust the remaining carbon budget at current rates of CO2 emissions. It will be, on the other hand, about 10-25 years before the world crosses the budget line for 2C.

So is reaching 1.5C goal still thinkable? The initial evidence in the last IPCC report points towards the (theoretical) existence of emission reduction pathways consistent with the 1.5C goal, but the technological, economic and institutional requirements are enormous. Take all of the most difficult features of individual pathways to 2C -- like fast and ambitious climate action in all countries of the world, the full availability of all required emissions reduction and carbon removal technologies, as well as aggressive energy demand reductions across the globe -- the feasibility of which were so heatedly debated prior to Paris. This gives you an idea of the challenge associated with the more ambitious 1.5C goal. 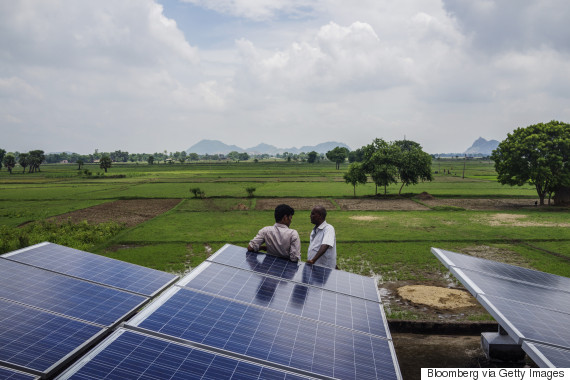 Solar panels in the village of Dharnai in Bihar, India, on July 9, 2015. (Prashanth Vishwanathan/Bloomberg via Getty Images)

Keeping the temperature increase below 1.5C appears rather elusive -- the institutional challenge in mobilizing adequate action at the timescales required appears too big. Still, positive surprises, unexpected technological breakthroughs or rapidly changing attitudes and ambitions may well occur and keep the 1.5C goal within reach.

What kind of technologies we would need to meet a 1.5C goal? One prominent feature of 1.5C pathways is their fundamental dependence on the ability to remove large amounts of CO2 from the atmosphere through carbon dioxide removal technologies. Such CO2 removals buy us time, while we are reducing emissions towards a fully decarbonized world economy -- as with a bank loan, we overshoot our carbon budget in the short term and pay it back later, with interest. All 1.5C pathways to date are characterized by such an overshoot. 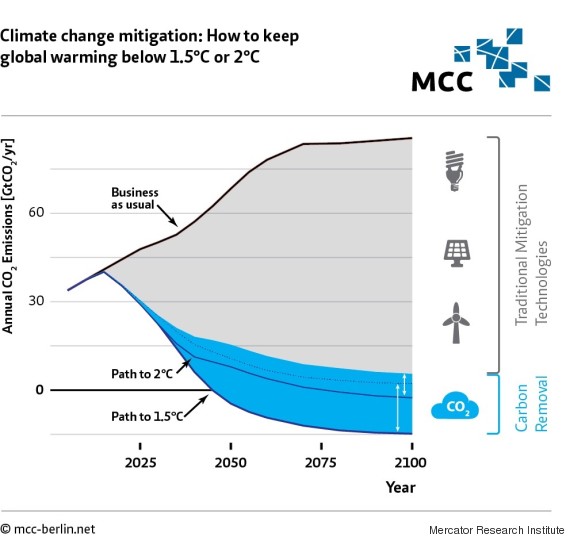 But the amount of CO2 we need to remove from the atmosphere is staggering: roughly speaking, every unit of CO2 we release around the globe from today onwards will need to be compensated for during the 21st century. In total, we would need to store 10-25 years worth of emissions at current rates under the Earth's crust.

Is that possible? We need a fine-grained exploration of all the ways to extract carbon from the atmosphere. These include biochar, afforestation, direct air capture, enhanced weathering or bioenergy combined with carbon capture and storage (BECCS). 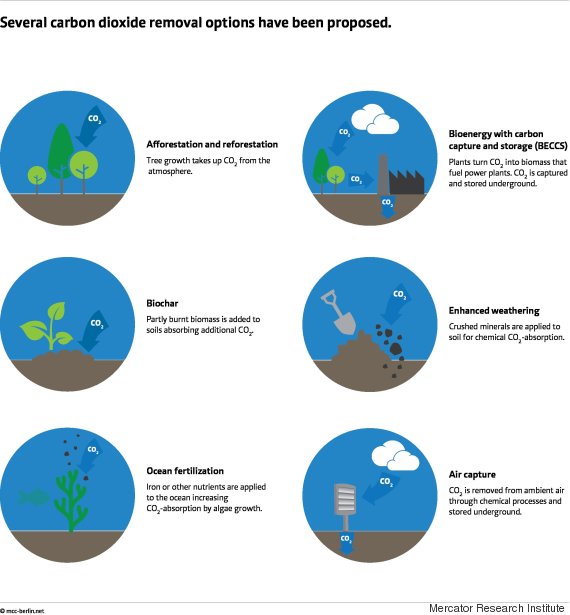 Currently, all of these technologies seem to have stark limits: some are currently hugely expensive while others require large amounts of land and may involve potentially large risks to food security or biodiversity. It is therefore prudent to believe that a portfolio of carbon dioxide removal options will need to be established to stand a chance of meeting the 1.5C goal.

But there is widespread skepticism about developing and deploying some components of removal technologies. For example, in the case of BECCS, there is opposition both against wider deployment of bioenergy and carbon capture and storage. In fact, CCS has a track record of lagging behind the roadmaps laid out by the International Energy Agency. Understanding the possibilities of meeting the 1.5C goal fundamentally hinges on our ability to overcome roadblocks and learn quickly about the various technologies and their associated risks at growing scales.

So what will work?

Limiting our dependence on carbon removal technologies -- for whatever reason -- requires immediate and sustained emission reductions across the globe, another difficult feature of 1.5C pathways. But the emission reductions that countries have committed to as part of the Paris agreement are not sufficient to even modestly enter a new era of sustained emissions reductions. Unless this short-term ambition is ratcheted up substantially, global emissions growth will only be slowed down in the best case. By 2030, carbon releases will have exceeded the remaining budget for the 1.5C goal four times and used up most of the remaining budget associated with the 2C goal. If history plays out in this way, the challenge of meeting the 2C limit will be roughly the same as the one we face today for meeting the 1.5C goal -- and, by then, more vital.

The IPCC special report needs to address the questions of how to achieve sustained and substantial greenhouse gas emissions reductions efficiently -- what works under what conditions and what doesn't. How can we end the renaissance of coal and initiate a global coal exit? What policies have been historically successful in reducing GHG emissions? What are the options to resolve distributional conflicts underlying the climate problem? By providing such a knowledge base for solutions to the climate problem, the IPCC special report could turn out to be of real value for policymakers as well as future international negotiations. The biggest threat is that it will exclusively focus on the long-term. This would risk diverting too many valuable resources away from what is needed now: jumpstarting a legacy of reducing greenhouse gas emissions towards a completely carbon-neutral world.