Star Trek is for everyone.

Whether you're a classicist who caught "The Man Trap" on its first broadcast, or a dewy reboot hipster whose parents weren't born yet in '66 when the crew of the U.S.S. Enterprise revolutionized television, with Star Trek, one's generation is no obstacle. Neither is gender, neither is race, neither is anything.

Scott Palm is 21st-century proof that the highly-evolved 23rd century (and beyond) lends inspiration to our present day. Inclusive inspiration. Everybody counts. And everybody has a good time.

Trust me on this. I've had the pleasure of attending Creation Entertainment's massive Star Trek Las Vegas convention. Whether you root for Team Federation, Team Klingon, or Team Kardashian -- oops, wait: Cardassian -- you are welcome, and you're going to find cool, creative, smart friends.

So it was when Mr. Palm, who's challenged by near-total paralysis from cerebral palsy, got to meet one of his Star Trek idols, and she helped him boldly go: to Star Trek Las Vegas. 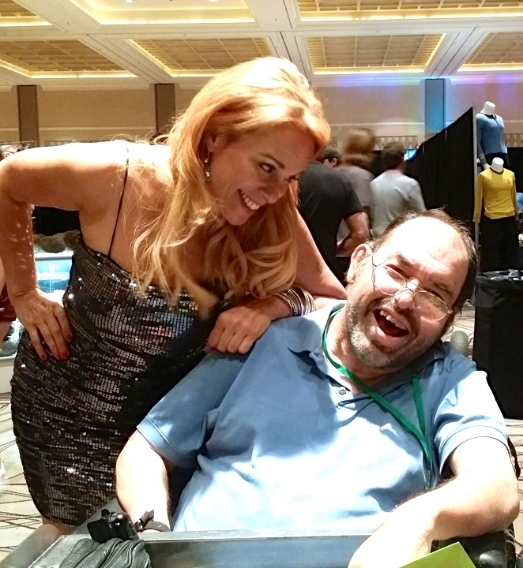 "The beginning of my journey started on August 24, 2013 at the Star Trek Seattle convention," relates Pacific Northwesterner Scott. "My sister and I went as my belated birthday present. We were outside of the vendors room talking. Chase Masterson [of Star Trek: Deep Space Nine, amongst other things] happened to be walking by, and my communication device caught her eye. She asked what it was. I told her. From that chance meeting, we became friends.

"In April of this year, I invited Chase to participate in my Individual Service Plan, or ISP. She agreed. An ISP is an annual part of a person with a disability's life in Washington State. It's a way to see if the person is being taken care of correctly, and it sets goals for the coming year. In my case, Star Trek Las Vegas was my goal.

"First, I figured out how much it would cost [for his whole trip]. It was going to be $2500. I joined a fundraising site. Chase made an announcement to her Facebook Fan Club for help, and I posted a breakdown of everything I would need. ChaseClub made donations.

"Then an associate of mine suggested I approach my assisted-living provider, Service Alternatives, and the company that makes my communication device, Prentke Romich Company, for donations. I worked back and forth with Chase, and she helped me write the letters for fundraising." 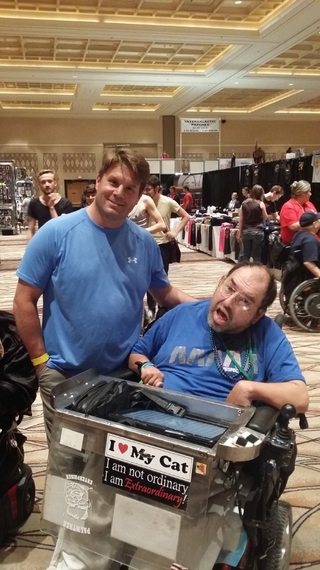 "I'm a business owner. I own Palmtree Enterprises. I train care providers in what they should know before they work with their clients. I covered an area of 200 miles in Washington in July, presenting to many administration offices about disability awareness, and in the process, earned money for my trip to the con."

Here's a short video of the friends, courtesy of Kayla Iacovino at TrekMovie.com:

As for Ms. Masterson, she beams about the good these creative connections can do:

"Scott's joyful spirit, and relentless commitment to improving his life, is extremely inspiring. If he can accomplish all he does, how could I not step in to help?

"But here's the thing: it may have started as a move of compassion -- but it ended up being a huge amount of fun." 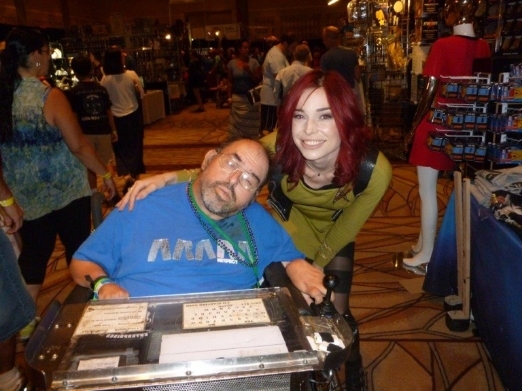 Scott with Chloe Dykstra, of SyFy's Heroes of Cosplay

Scott's lovin' it: "The Star Trek Las Vegas Convention 2014 was beyond everything that I ever had read about in previous years. The sessions were interesting and exciting!

"At the con, that was happening," declares Scott, drawing the parallel. "I was able to go up to Rod Roddenberry [Star Trek creator Gene Roddenberry's son] and start a conversation. I wanted to let him know what Star Trek meant to me. That was huge for my self worth and confidence."

Chase reflects, "Helping make these stories happen -- not just onscreen, but also in real life -- is the best thing about being an actor."

"It was a pleasure to be a part of a dream come true," adds caregiver Shelina Fain, who flew down from Seattle with Scott. "Watching Scott and Chase talk and smile together was incredibly inspiring."

Caregiver Nicollette Cook elaborates: "Chase's friendship, encouragement, and help, as well as the support of Scott's staff, made it clear to Scott that his goal was something he could achieve. Scott had a blast at the convention! He was able to share his story and educate the curious, using his communication device. Hopefully his experience will help remind others that having disabilities does not mean that you can only do certain things. It may mean that you will need a little help, but the most important thing you need is the desire to reach your goals." 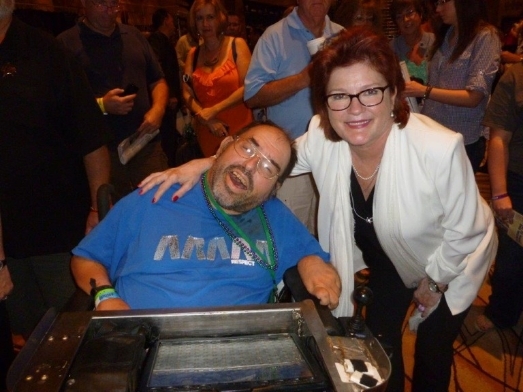 "Chase's and my friendship is unique," grins Scott. "It seems to have multiple layers. First of all, it has a mutual love for Star Trek and all that it represents. That might be obvious until you realize that Star Trek has gone from something entertaining in my life to something in real life. Chase is unlike anybody I have known in my 53 years. I don't have the vocabulary to describe to you how wonderful she has been."

Scott's still amazed by the experience:

"When I befriended Chase on Facebook, a caregiver thought Chase wouldn't remember me, but she did. When I was considering asking her to do my ISP, I was told I shouldn't. But see what happened? Throughout my journey towards STLV 2014, there were two things that kept me going. One was I'd be in the Star Trek universe. But the bigger one was that I would be with Chase for a little while." 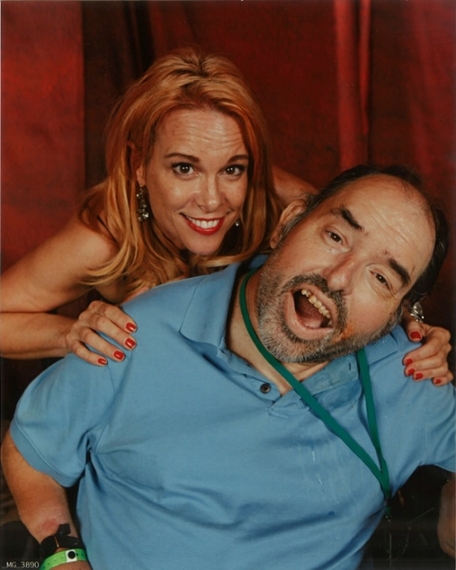 Ms. Masterson, whose charms enchant many around the globe (in fact she's soon off to the U.K. to record Worlds of Doctor Who, and her own Doctor Who spinoff, VIENNA, for Big Finish), sums up:

"In the world of Trek, disabilities fade. People go the extra mile to interact on equal ground, despite any disability or obstacle. That's Gene Roddenberry's philosophy of 'Infinite Diversity in Infinite Combinations.' It's a brilliant vision of life -- for everyone, everywhere."