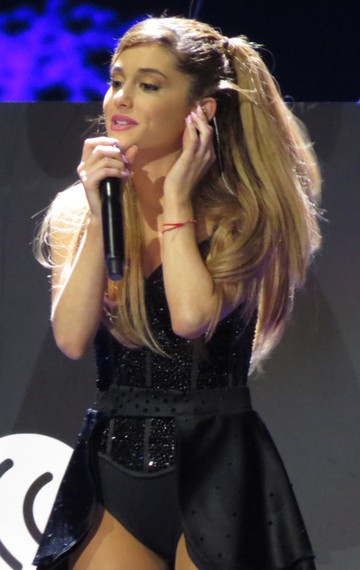 We had been standing for hours, a cluster of dots amidst a spontaneous assembly of anxious teens, moms and dads, chatting, texting, constantly checking social networks for news, any news, about whether and when Ariana might come out from the New York apartment where she was staying. The next morning, she was going to perform for The Today Show. Fans began forming the line into Rockefeller Center at 11 a.m., about 22 hours before her performance. News spread quickly of the address of where she was staying -- sorry, Arianators, I won't give the exact address to protect the performer's privacy -- along 47th Street. Excitement increased with a text sent by someone, a friend of my daughter's said, who actually knew Ariana:

Sixty-six characters revealed a lot of information, both explicit and implicit. One young man seemed particularly keen to see her. He told anyone who would listen that he had seen Ariana last year leaving this very apartment building, as he nervously paced back and forth, a big wide white toothy smile accompanying each description of his star brush. Catching the young ladies' interest at first, he seemed to lose them after going on just a little too much. But he gained status in the group when he proudly shared his post on Instagram, of Ariana next to him, its value affirmed with 823 "likes." Next to him! Wide-eyed girls gathered to glimpse the proof of the prize. It was now 10 p.m.; he had been waiting since 11 a.m.. When he spoke, we listened. He knew how it would go down. After her car was parked, she would come up. But, he said, you have to be quiet. We will, we will! If you're rowdy, she won't show. I thought of a beautiful forest fawn, the late afternoon sun glistening off of its delicate downy fur. Break the silence with the crumbling of a dry leaf, the snap of a twig, and the beautiful creature bolts, never to be seen again.

Within moments after the text announcing her imminent arrival was sent, fans, along with some bored parents (not me!), convened around two key spots: the garage entrance and two large grey doors across the driveway, nondescript by design to serve as a discreet back entrance to the luxury building. Like a shell game, her entourage had at least four different vehicles, each a shiny black Escalade, each with the same license plate except for the last digit. Which transports, which escorts? Anticipation hung over us, a heavy dark cloud with a very thin silver lining. Many eyes were fixed on the incoming traffic coming down 47th Street. Each black vehicle whisked the cloud away, revealing bright rays of sun if it was a black Escalade, eruptions bubbling up if it bore the telltale yellow license plate with ND CLS 1, 2, or 3. Several hours into this excruciating dance between anticipation, boredom, sore feet and texting fingers probing for hope, it arrived. At least, everyone simultaneously agreed, without speaking, that it did.

The bulky black vehicle turned right, descending slowly into the garage entrance past the crowd pressed close. Throngs quickly pulled away from the back entrance the moment someone saw the license plate: ND CLS. Wait. No number? It's her! Really? Someone screamed, dozens echoed amidst yelps and excited whispers. Hearts were pounding; toes tingled. Some began running down the ramp into the garage, quickly stopped by a barking security guard.

"Stay by the side! Single file only!"

We quickly obeyed. This was going to be it, right? We waited. The guard left. Was he going to speak to Ariana or to her driver? He would tell her that we were here. After a few moments, the guard returned.

"She's not coming up, folks. She's tired. You can come back tomorrow."

That can't be right! It's not fair. Tomorrow is too late. We have to be in line over at Rockefeller Center.

Surprisingly, some returned to wait at the back entrance. I can't imagine why. To see the black Escalade whisk by the following morning, on the way to the concert, her silhouette behind the tinted windows?

Walking back to our hotel, in a moment of tired, disappointed frustration, my daughter's friend revealed the simple truth: "All I want is for her to know that I exist." Everyone wants acknowledgment from their icons, their mentors, sometimes from their parents; feeling invisible can make you want to disappear. Of course she knows you exist. You and your friends have raised her up so that she can share her art, her passion, with the world. Without you, she would be a young lady with dreams not unlike yours. She would be standing with you, anxiously waiting, chasing her existence, just as we were chasing after Ariana.