One day the world's top-rated chess player Magnus Carlsen will sit down and write about his games. This is what the great players do, but not yet. At 21, he is too young to be distracted by that on the way to become the world champion. Energy should go into playing the games, not writing about them. Eventually, he will select his best games and say what needs to be said. It will be his legacy.

The late Bobby Fischer, who would have been 70 on March 9, published his only book, My 60 Memorable Games, at the age of 26, just prior to his marvelous run for the world crown. Larry Evans provided introductions to the games. It was praised as one of the best game collections. Robert Hübner, the 1980 Candidates finalist and one of the world's top analysts, scrutinized the book. Fischer, in his opinion, always searched for activity, but missed "strong defensive moves and strategies." But Hübner found the general quality of Fischer's creative ideas very high and his desire for clarity in his positions and annotations outstanding. 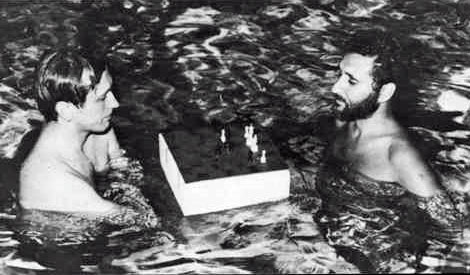 Fischer and Evans playing chess in the swimming pool before the match in Reykjavik in 1972.

Garry Kasparov will turn 50 on April 13 and his greatest fear is to become irrelevant, as he stated a few times in New in Chess. It explains his hectic life style, traveling around the globe, challenging the political establishment in Russia, giving lectures and writing books. But no matter what he does, his legacy is in chess.

The former world chess champion is not involved in playing professionally anymore, he watches the game from the sidelines, but he has plenty to say. After dipping into chess history in nine books, from My Great Predecessors to On Modern Chess series, Kasparov tells his own story and presents 100 games in Garry Kasparov on Garry Kasparov, Part I: 1973-1985, published by Everyman Chess.

Something might have been in the stars early on: he read newspapers at the age of four and learned about every country in the world from a globe his father gave him for his sixth birthday. He received a marriage proposal from a little girl in the third grade and we almost lost him to swimming. But Kasparov chose chess and under the guidance of his mother Klara, he had a wonderful career.

Kasparov is proud of his latest book and talks about it on a new DVD, Kasparov -- How I became the World Champion, recently issued by Chessbase. It is a summary of the book, otherwise it would take 40-50 hours to cover just the games. He speaks with a measured voice that can't be compared to his fiery speeches in front of live audiences. He adds a few things not found in the book.

From early on, he was looking for attacking set-ups, lining up the pieces to storm the opponent's king. "I had a dream," he repeats, showing one of his early games, and you can feel how he wants to force his pieces to certain squares, almost physically. It is like a wish that the pieces would listen to his commands against the chess logic. His energy level rises as he shows beautiful moves and subvariations from his games.

In 1975, Kasparov changed his name from Weinstein to Kasparov after his mother. He also played in the Soviet Junior Championship dominated by an Alma-Ata player, Evgeny Vladimirov. It was an important year. The Soviets got back the world title after Bobby Fischer refused to defend it against Anatoly Karpov who already, at the age of 24, began to publish collections of his games.

But not everything was lost on the other side of the Atlantic. The USCF executive director Ed Edmondson, who cleared the political obstacles for Fischer and helped him to become the world champion, started several programs for young talented U.S. players. 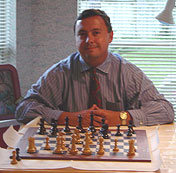 I coached the late Mark Diesen (pictured above) and went with him to Groningen where he became the 1976/77 Junior World champion for the first time since another American, William Lombardy, swept away the competition 11-0 in Toronto in 1958. Having worked with Fischer in Reykjavik in 1972 and with Diesen's success, I had suddenly two world champions on my coaching resume.

At that time I was more interested in playing. My best years were in the 1970s, having been rated among the world's top 10 on a few occasions. I was still the top-rated American in 1982 when I met Kasparov for the first time in Bugojno. He was having a great time, scoring his first major tournament victory in a very strong field. 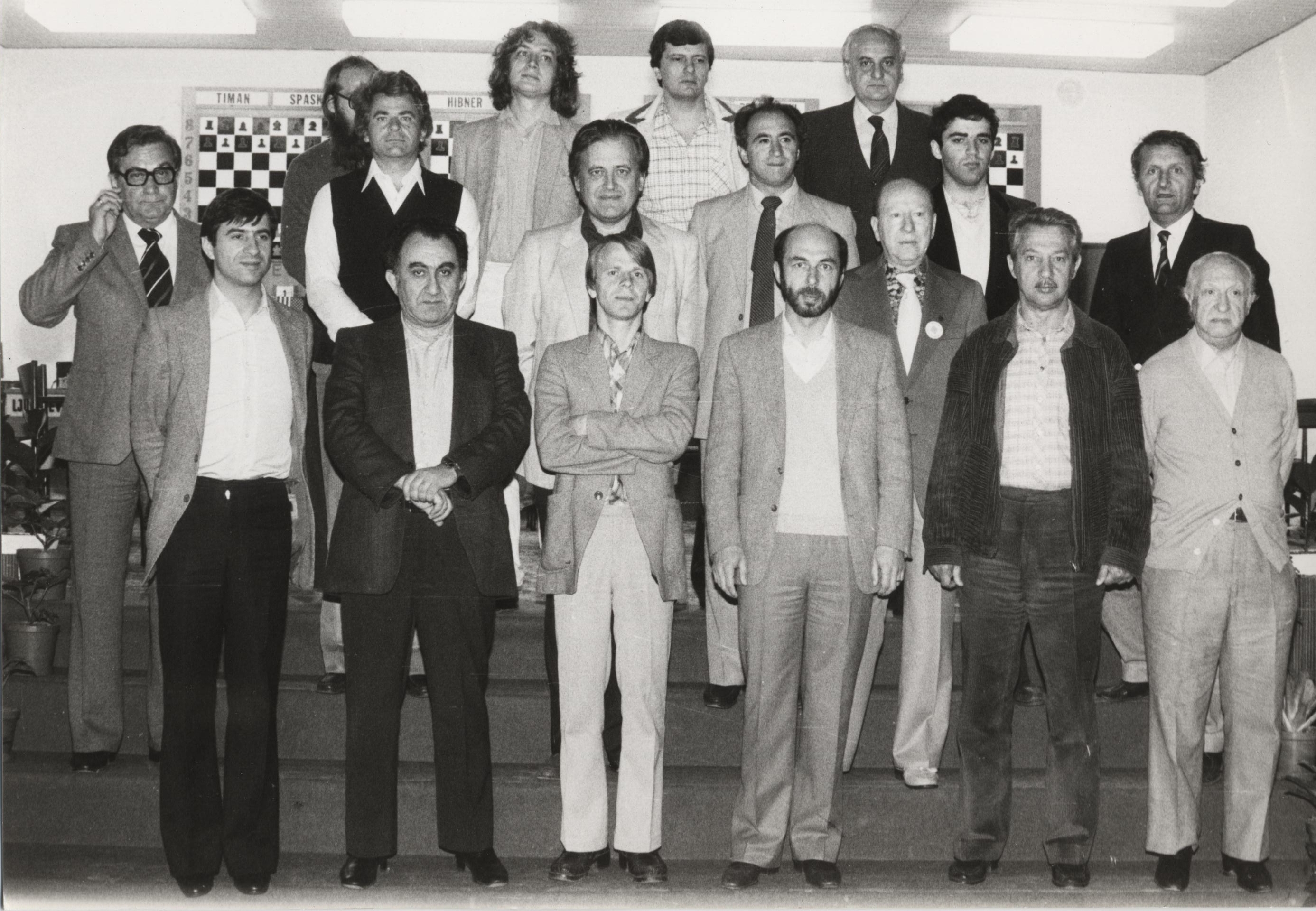 Our game was a see-saw tactical battle, but it was during the post-mortem when I encountered the full force of Kasparov's thinking. 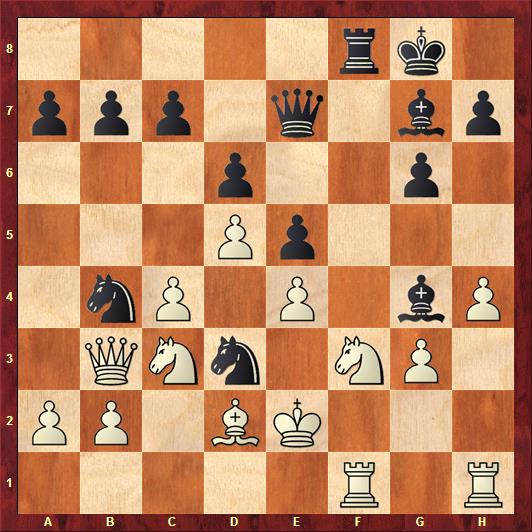 I was trying to catch one of the black knights, but I went about it clumsily:

The knight move interrupts the control of the first rank and Kasparov punished me. I knew I should have cleared a space for my king and cover the square f2, but I found the right way too late. I pointed it out to Kasparov after the game: 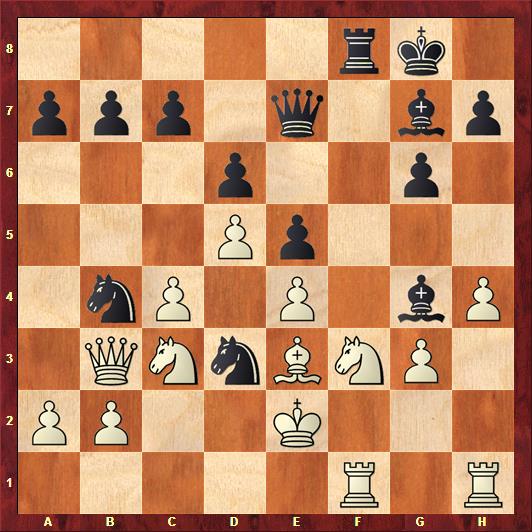 The white king can hide on the square d2 and at the same time the bishop controls the important square f2. White also threatens to pick up a knight with 21.a3. But as soon as I let my bishop plunge on the board, Kasparov immediately answered:

I grasped immediately that tactics are for him second nature and the theme of deflection is child's play for him. Everything happened with lightning speed. He didn't even let me move my pieces and pointed out the rest.

21.Bxh6! White doesn't have a choice. The black queen invades the square f2. 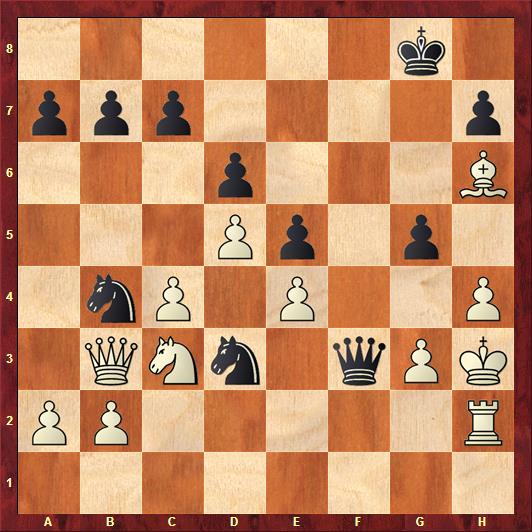 White is forced to play 27.Bxg5! and black has to make a draw with:

But I played 20.Nd1? and Kasparov had no problems to win:

Kasparov's next volume will cover the 1985 - 1993 period. Kasparov mainly works with Dmitry Plisecky, but his former coaches and researchers also contribute to his monumental work. It is not unusual to find working tandems in books of collected games. Fischer had Evans, the current world champion Vishy Anand writes with John Nunn.

The all-time best woman chess player Judit Polgar acquired the help of Mihail Marin. Her book How I Beat Fischer's Record, published by Quality Chess, is conceived as a teaching manual, mostly based on her games. The book showcases her extraordinary tactical talent and it is entertaining and well written. She plans two more volumes and it will be interesting to see it as a whole. What she has done so far is very encouraging.

In the chapter on mating nets she published Aron Nimzowitsch's playful composition that made a great impression on her when she was growing up. 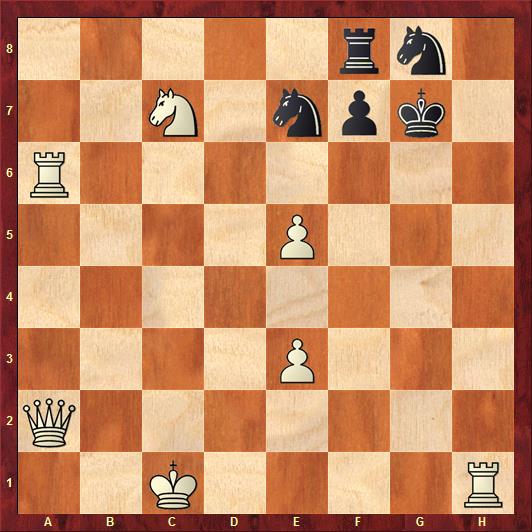 Nimzowitsch was fascinated by combinations at an early age. As a reward for his good schoolwork, his father, a strong master, showed him the Immortal game, Anderssen- Kieseritzky, and the young Aron grasped it immediately. 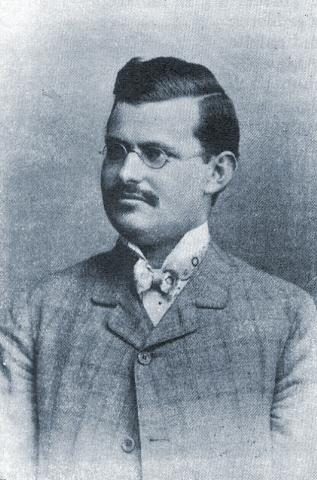 Aron Nimzowitsch in his 20s

McFarland & Company recently published Aron Nimzowitsch: On the Road to Chess Mastery, 1886-1924, by the Danish chess historians and writers Per Skjoldager and Jorn Erik Nielsen. It is a marvelous, well-researched chess biography, tracing in great detail the first part of the Latvian master's career. It ends two years after he permanently settled in Denmark. There is plenty of documentation - charts, maps, crosstables, photographs - to cover the period marred by World War I that put many chess careers on hold. Some 450 games are included in this volume, commented by Nimzovitsch himself or his contemporaries. We can see from Nimzowitsch's writing how he began forming his theories on chess strategy that made him one of the founders of the Hypermodern chess.

The authors plan a second volume on the period from 1925, the year in which Nimzowitsch published his influential works My System and The Blockade, till his death in 1935. Judging from their meticulous work, it may take them a few years to finish. It will be worth waiting for.

The Nimzowitsch's image is from Edward Winter's Chess Notes