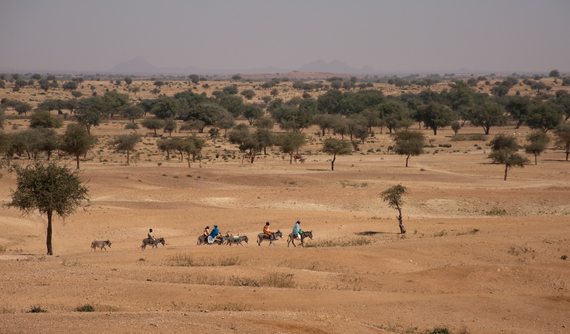 We keep chasing crises. The international community -- humanitarians, journalists, funders, and general public -- go from one emergency to another, forgetting the ones left behind, until we end up back at an old one because... it's again a crisis!

There's a matter-of-factness about it all: "We're doing our best with what we have." Extreme emergencies appear, so we must keep people alive. The humanitarian community does heroic work in often impossible situations. The numbers are massive and mind-numbing: Syria alone has given the world 3.5 million displaced people; Central African Republic, 1 million; South Sudan, 2 million; and there are millions more from other conflicts. Over 50 million people around the globe have been forced to flee their home.

More numbers: the budget for the UN Refugee Agency (UNHCR) for 2015 is over $6 billion (UNHCR Identifying Needs and Funding Requirements); the World Food Programme's (WFP) budget is close to $10 billion (Contributions to WFP 2015). The principal source of funding for UNHCR and WFP is overwhelmingly governments, and it's on a volunteer basis. The U.S. government is the largest single source of funding for both.

In Darfuri refugee camps on the Chad-Sudan border, people are being asked to survive on less than 40 percent of what's considered the minimum food ration standards of 2,100 calories per person, per day. The humanitarian community is telling them that there are not enough resources, so they will have to quickly become self-reliant, without much in the form of preparation. These camps are in one of the most remote and harshest places on earth, a region that is not capable of sustaining large concentrations of people. All resources are scarce. Women and girls are walking between four and eight hours to collect firewood. They sneak in and out of the camps during the dark hours, to avoid being seen by some within the local population, who because of extreme resource scarcity, the refugee women report, will beat, rape, and steal the wood from them.

As Achta, a single mother of six young children, and dozens of other mothers told us (Achta's Story), the food rations will last between a week or two. The rest of the month, families have to scramble to find food or income, with the reality that there will be many days without food. For young children, this sustained malnutrition will have life-long effects.

"Childhood malnutrition diminishes adult intellectual ability and work capacity, causing economic hardships for individuals and their families. Malnourished women tend to deliver premature or small babies who are more likely to die or suffer from suboptimal growth and development. Poor early nutrition leads to poor school readiness and performance, resulting in fewer years of schooling, reduced productivity, and earlier childbearing. Thus, poverty, undernutrition, and ill-health are passed on from generation to generation." (Allen and Gillespie 2001).

These children will grow to be the future of Darfur. They will be the leaders, the teachers, and the mothers and fathers. They will be the ones that will be making difficult decisions, including whether they will pick up guns and be a part of creating future crises or choose peace.

There is a food and funding crisis for global emergency situations, but we don't have to accept that as the end of the argument. We, the U.S. and the world, are doing a lot, but not enough. By not providing true opportunities for the most vulnerable -- especially the children -- to regain a life of safety and dignity and to live in a space where they can thrive, we are ensuring that we will continue to chase crises in an unending, cynical cycle of violence, poverty, and hopelessness.