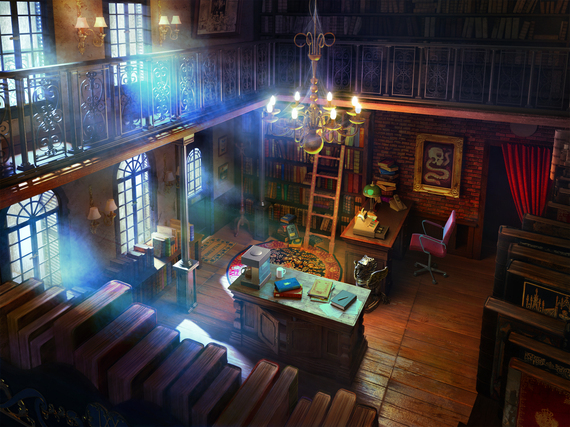 To be a Gabriel Knight fan, growing up, felt like being in possession of a secret language. People might sometimes share the same favorite books, but games? In the '90s, to be a computer game fan was even more nerdy than a passion for reading books. And the comparison is apt because Gabriel Knight: Sins of the Fathers, released originally by Sierra On-Line in 1992, was as complex and rewarding in its own way as a book. Game designer and writer Jane Jensen has cited inspirations for her trench-coated anti-hero ranging from Neil Gaiman's Sandman to Clive Barker, and a love of literature permeates throughout. (The protagonist owns a rare books store, and one of the pivotal moments of his destiny involves a magnificent library.)

Now the topic of Gabriel Knight has been wrenched from 90s nostalgia to 2014 with the release of an updated edition of Sins of the Fathers from Jane Jensen's studio Pinkerton Road, making the game available to a new generation of players. The 20th Anniversary Edition features all-new (and beautiful) graphics, an updated musical score, and even some additional puzzles. (And a new cut-scene so chilling it is reminiscent of a darker Sandman comic.)

Set in New Orleans, Sins of the Fathers opens with Gabriel investigating a series of mysterious murders as inspiration for his new book. Gabriel lives under a cloud of financial ruin and failure, as did his male forbears, and his writing career is a running joke. He suffers from horrific nightmares. It is only as the game progresses that Gabriel will put the pieces together: his family is under a curse. He comes from a centuries-old line that is destined to fight evil, a Shattenjager (shadow hunter). And he discovers that the key to lifting this curse is connected with the "Voodoo Murders" taking place in present-day New Orleans.

But Gabriel is hardly a hero. The game opens with his shop assistant Grace on the phone with a female caller: "I'm sorry, but Gabriel is a lout. Oops--I mean, he's out." Character development is the heart of this game--Gabriel's struggle is not only with the curse, but within himself. And despite the game medium, his character develops in a trajectory that is rich with subtlety and subtext (and very funny lines). Beginning as a hilarious jerk, Gabriel faces so many challenges throughout the story that by the end his transformation makes sense--even as he remains, on some level, a hilarious jerk.

There are layers to what makes Sins of the Fathers (and the series as a whole) so great. There's the writing, which is of a literary quality and especially shines in the interactions between Gabriel and Grace. There is the atmosphere you can cut with a knife, attributable to the mesmerizing soundtrack by Robert Holmes. And there is the fact that this is one of those stories so rare in any medium: one from which you, along with the protagonist, emerge feeling in some way changed. As Gabriel's once-friendly home city turns sinister, as he learns the secrets of his heritage and of the dark forces that he's up against, the player goes through these experiences with him. By the time he returns home, he has been through the fire, and so have you.