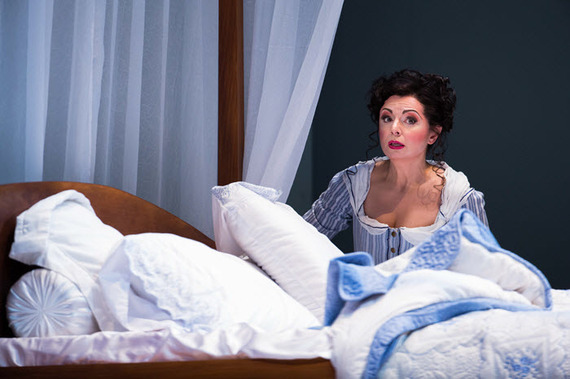 Have you ever wondered what it feels like to be onstage in a major opera production? Fortunately, you can experience the excitement of such a production vicariously by means of an interview. Sicilian soprano Nuccia Focile generously shared her perspective on interpreting the role of the maid Susanna in Mozart's opera Marriage of Figaro during an interview conducted while she was in Seattle, Washington performing in the Seattle Opera's recent production.

Nuccia's love of the opera is revealed through her insights on how it feels to be up on stage surrounded by the elaborate set that was created for the production. Her hopes, feelings, and aspirations, which she so skillfully transfuses into the character of Susanna when she is on stage, are woven into her commentary, allowing us to experience her excitement in participating in the production. The interview helps transport us to another era, the day in 1786 that the opera first debuted, the day that Figaro and Susanna plan to marry.

In this bold, modern Seattle Opera production the audience is treated to a series of vignettes that comprise the broader story line, cleverly presented using a series of configurable moving compartments on stage. The dynamic set allows performers and audience members alike to experience the feeling of the characters traversing the spaces of the castle on stage. This minimalist backdrop frames a stellar cast and shows off Mozart's genius, highlighting the composer's signature skill: the integration of the underlying musical score with voices in a rich variety of musical arrangements from arias to choruses.

The Marriage of Figaro is an opera buffa, a comedy, but Mozart's talent as a composer lifts this opera to a serious work. While the style of the opera is comedic, the implications to the characters in the drama are serious as Susanna and Figaro navigate a host of interferences with their plans to marry.

The Sicilian soprano Nuccia Focile brings her extensive experience at playing Susanna to the role and infuses it with emotion. Susanna is fiery and passionate, but also has moments in which she must be focused on attaining her goal of marrying Figaro, a man she loves very much. On opening night Nuccia's prowess at playing the role was amply demonstrated, and was recognized by the audience with great enthusiasm.

When interviewed about her participation in the Seattle Opera production, Nuccia stressed that she loved this particular production because it is "all about the people." Here are some short excerpts from the discussion with Nuccia in which she shared her insights.

Q: What drew you to this production?

Nuccia Focile:
I did this production in New Zealand with Aidan Lang in 2010. At the time I was engaged to sing the Countess. So, I discovered this production the first time as the Countess. When I found out that I would do the same production in Seattle as Susanna, I was very happy. I thought that it will give me the opportunity to see the story from a different perspective. It is amazing and I am excited about it.

I find it quite challenging. In rehearsal it was a bit confusing at first since I had played the Countess before in this same production, but Susanna is the role that I have performed most. So, coming back to Susanna now after having sung the role of the Countess previously was definitely a challenge. But, I feel quite at home as Susanna now. There is always something new to learn, even though it is an opera you have done many times before.

Q: What do you contribute personally to the production?

Nuccia Focile:
I think that the fact that I am Italian probably helps. Since Italian is my native language I think I am able to help the other cast members, especially with the recitative where it helps to really get the rhythm of the language. The way I am viewing Susanna now has really become that I see her as a real human being, especially in this production. She is bubbly, yet she is also a woman in love. She has to look like a real person on stage.

Q: What is it like to play the role on the modern set?

Nuccia Focile:
This set is definitely so exciting and interesting. You can see what happens in the castle in more than one room at a time from the audience point of view. As performers, it gives us the real feeling of being in the castle and moving from one room to another.

Since the set can move, it also gives us as performers a more realistic way of moving from one room to another, entering and exiting a space. It also gives you the feeling of the atmosphere on stage; for example we start with the smaller room, and then move to larger rooms and can feel the difference. So, essentially you feel the journey like you are really in the castle. It is an amazing concept.