By Andrew Cawthorne and Daniel Wallis

CARACAS, March 5 (Reuters) - Venezuelan President Hugo Chavez was infected with cancer by "imperialist" enemies, his No. 2 alleged on Tuesday, adding that the socialist leader was suffering his hardest moments since an operation three months ago.

Vice President Nicolas Maduro's accusations and somber prognosis came during a televised meeting of political and military leaders at the presidential palace amid speculation of an imminent end to Chavez's 14-year rule.

"We have no doubt that commander Chavez was attacked with this illness," Maduro said, repeating a charge first made by Chavez himself that the cancer was an attack by "imperialist" foes in the United States in league with domestic enemies.

"The old enemies of our fatherland looked for a way to harm his health," Maduro said, comparing it with allegations that Palestinian leader Yasser Arafat, who died in 2004, may have been poisoned by Israeli agents.

Chavez has not been seen in public nor heard from since undergoing surgery in Cuba on Dec. 11, his fourth operation since the disease was detected in his pelvic area in mid-2011.

The government says Chavez's breathing problems have worsened with a "severe" new respiratory infection, and that his condition is very delicate.

"These are the most difficult hours since his operation," Maduro said, adding that doctors were with the 58-year-old president and that Venezuelans should unite in prayer for him.

The setback was devastating news for many of Chavez's passionate supporters who have been praying for his recovery.

"There is so much sadness and confusion," said one die-hard Chavez loyalist, Marisol Aponte, a community worker in the slums of Caracas, her voice choking with emotion. "But we must be strong and put into practice all he has taught us."

Alleging a plethora of conspiracies from abroad and inside Venezuela, Maduro said the U.S. Embassy's Air Force attache was expelled from the country for allegedly trying to stir up a military plot against the government. A U.S. Defense Department spokesman identified him as Colonel David Delmonaco and said he was en route to the United States.

"Our supreme responsibility is to keep telling our people the truth," said Maduro, surrounded by grim-faced officials including Chavez's elder brother Adan, a state governor.

Several dozen people gathered from early morning at the Catholic chapel in the military hospital where officials say Chavez has spent the last two weeks since returning from Cuba.

Some prayed aloud, while others wept quietly.

The government has repeatedly said Chavez is fighting for his life. Though short on medical details, officials have said he is breathing through a tracheal tube, unable to speak, and undergoing a new round of "high-impact" chemotherapy.

They are furious at speculation, particularly among pro-opposition media, that Chavez may already be dead.

Opposition leader Henrique Capriles has repeatedly accused Maduro and others of lying about Chavez's condition.

Chavez is adored by many poor Venezuelans for his humble roots, earthy rhetoric and welfare policies financed by the country's dominant oil industry.

But opponents view him as a dictatorial leader who has ruined an economy blessed with the world's largest oil reserves.

Chavez suffered multiple complications after his latest surgery, including unexpected bleeding and an earlier severe respiratory infection that officials said had been controlled.

Chavez has in the past undergone several grueling rounds of chemotherapy and radiation treatment, which at times left him bald and bloated. He twice wrongly declared himself cured.

Some medical experts said they doubted Chavez was strong enough to receive more chemotherapy at the moment.

The only sight the public has had of the former soldier since the surgery was four photos published by the government while he was still in Havana that show him lying in a hospital bed.

Dozens of student demonstrators have been holding protests around Venezuela, including chaining themselves up, to demand proof Chavez is alive and more medical details.

"The lack of precise information worries Venezuelans and contributes to the rumors," said Ramon Guillermo Aveledo, executive-secretary of the opposition Democratic Unity coalition. He lambasted the government's aggressive line toward opposition politicians in recent days.

Maduro and other senior officials have been haranguing the opposition daily as "fascists" and "conspirators" exulting in Chavez's suffering and plotting to destabilize Venezuela.

Should the Venezuelan leader step down or die, an election would be held within 30 days and would probably pit Maduro against Capriles. Polls show Maduro is the favorite, helped by Chavez's personal endorsement as his successor.

The stakes are high, too, for other left-leaning nations around Latin America and the Caribbean.

Chavez's oil-financed largess has boosted economies of allies from Cuba and Nicaragua, to Bolivia and Ecuador. (Additional reporting by Girish Gupta, Mario Naranjo, Marianna Parraga and Patricia Velez in Caracas, and David Adams in Miami; Editing by Kieran Murray and Eric Beech) 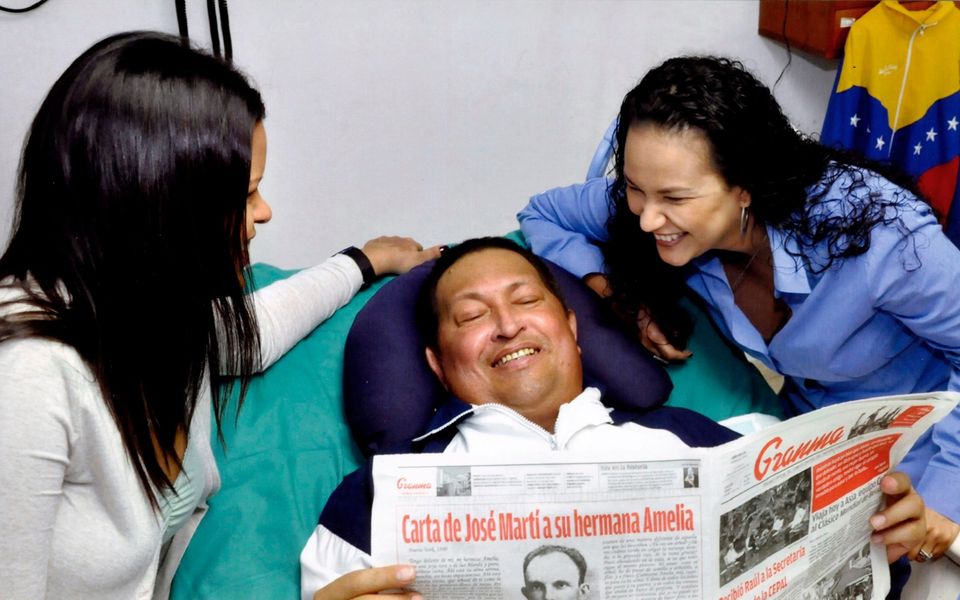