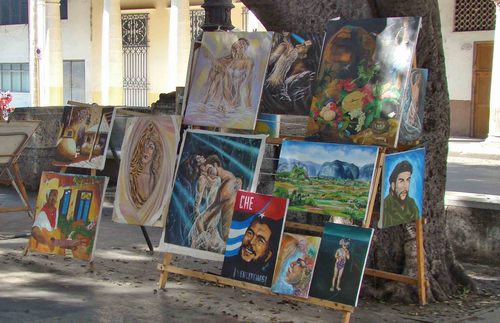 Art for tourists in Cuba: Che is always prominently displayed

It's been said a thousand and one times: intellectuals are the conscience of society. But nearly fifty years ago Che Guevara criticized Cuba's pre-Revolution artistic and literary world, accusing them in the harshest terms: "The guilt of many of our intellectuals and artists resides in their original sin; they are not authentic revolutionaries." Published in the Uruguayan weekly Marcha, under the title, "Man and Socialism in Cuba," Guevara reminded his readers that the struggle in the Sierra Maestra had not been supported by a battle from the pages of books, nor by an offensive launched through painters' easels nor poets' stanzas. Very few writers chose to link their prose or rhymes to the pounding of the guns, although many opposed Fulgencio Batista's government and supported political changes in the country.

When the time came to redeem themselves for this lack, intellectuals began describe the Revolution in brilliant colors, singing its praises as a dream come true. Those were years of great political commitment, although some figures from the world of arts and letters were frightened by what Fidel Castro confirmed in his speech known as Words to the Intellectuals: "With the Revolution, everything, against the Revolution, nothing."

Censorship and the intention to push artistic creation into the iron arms of Real Socialism characterized the infamous Five Grey Years (1971-1975), when critical voices within the island were gagged. The creation of cultural institutions encompassing virtually all creative talent contributed to what was called the parameterization of art; a process where a set of parameters of acceptability is created along ideological lines, dictated by power. Artists who fell outside these lines were fired from their jobs, harassed, forced into manual labor and even imprisoned.

Cuban culture also suffered, along with every other professional sector, from the mass escape of the most discontented, which made it easier to control those who decided to stay. But a change in strategy in the eighties and at the advent of the nineties substituted the carrot for the stick. Instead of repudiation rallies - screaming mobs surrounding their homes - public scorn and threats of prison, intellectuals were offered small stipends. These were no longer the times of the so-called Padilla Affair, in which a visibly frightened poet was force to read a public mea culpa for the verses that flowed from his pen, and ultimately to pay for his "sins" with a decade in prison followed by exile.

Now they decided to capture the intellectuals with perks, such as permission to travel abroad and the possibility of paying for the trips in national currency, instead of the high cost convertible pesos required from other Cubans. Members of the Cuban Writers and Artists Union (UNEAC) were allowed to have an email account, and some even received a prized home internet connection. But the crumbs of privilege achieved by the intellectual and academic world came at the cost of agreeing to the gag order, of not criticizing.

For some time now the long relationship of complicity and subordination between art and power has begun to crack. Critical comments are heard even from the regime's singer-songwriters such as Silvio Rodriguez and Pablo Milanes, iconic figures who functioned for decades as heralds of the Cuban "process." Meanwhile, academics, who with their hypotheses and research have supported the government's actions, now dare to express their rejection of certain of its practices.

Even UNEAC is showing cracks, as several of its writer members have added their names to the more than 50,000 signatures collected in the name of Orlando Zapata Tamayo - an imprisoned hunger striker who died in February - to demand the release of all political prisoners.

Suddenly, the rebellion appears to be winning over a broad cultural spectrum of this Island, slowly, but with clear signs of irreversibility. This time the vanguard of change has not been launched from books, nor in the lyrics of songs, nor in the curricula of the universities, but in them it is finding an amplifying echo. The critical consciousness of Cuban society seems to be waking up.