Making sense of current events on an international scale is a challenge, even for the brightest people. News coverage of global trade and financial markets has become an exercise in decoding an onslaught of abbreviations and acronyms. For ordinary citizens unsteeped in geopolitics, the jargon can make economic diplomacy sound alien, making the subject difficult to understand.

Do recent economic developments and Brexit-speak confuse you? If you answered yes, you're not alone. These days, news broadcasts and articles are peppered with geopolitical jargon. Frequently-used foreign policy terms are defined below. My goal in creating this glossary is to demystify recent conversations related to the EU, and to help people enrich their understanding of current events on a global scale. 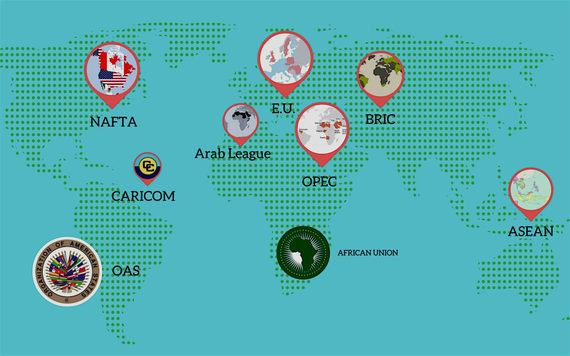 Arab League - The League of Arab States, or LAS, is a voluntary association of countries whose populations are mainly Arabic speaking, or where Arabic is an official language. The Arab League has 22 members (including Palestine) and aims to strengthen ties among member states, coordinate their policies, and direct their regional efforts toward a common good.

AU (African Union) - The AU is comprised of all 53 African countries in Africa, created for political and socio-economic integration and cooperation.

BREXIT - Portmanteau of "Britain" and "Exit." Brexit refers to the United Kingdom (UK) vote to withdraw from the European Union (EU).

BRIC - BRIC is a grouping acronym that refers to the countries of Brazil, Russia, India and China, which are all deemed to be at a similar stage of newly advanced economic development.

EEZ (Exclusive Economic Zone) - The EEZ is a sea zone prescribed by the United Nations Convention on the Law of the Sea over which a state has special rights regarding the exploration and use of marine resources.

EU - An economic and political partnership of 28 European countries. The EU formed in the wake of WWII for purposes of promoting trade and economic cooperation.

Eurozone - The monetary union of 19 European Union (EU) member states that have adopted the Euro (€) as their common currency.

FTZ (Free Trade Zone) - A free trade zone is a geographic area where goods may be landed, handled, or manufactured without the intervention of the customs authorities.

G77 (The Group of 77) - G77 is the largest intergovernmental organization of developing nations in the United Nations. The organization, established in 1964, currently includes 130 member nations. G77 functions like a union or sorts with the UN and allows developing nations to leverage their negotiating power on issues of international commerce and development.

IMF (International Monetary Fund) - The IMF was created after World War II, in order to prevent economic crises like the Great Depression. The IMF is a specialized agency run by the 186 member countries of the United Nations and its aim is to facilitate foreign exchange transactions, and thereby foster investment and promote balanced global economic trade.

OAS (Organization of American States) - The OAS is a group of 35 independent countries in North and South America and constitutes the main political, juridical, and social governmental forum in the Hemisphere.

OPEC (Organization of Petroleum Exporting Countries) - OPEC coordinates the petroleum policies of its member nations and provides them with technical and economic aid. OPEC functions as a cartel and attempts to limit price fluctuations in crude oil. OPEC was established in 1960. As of 2016, OPEC has 12 members: Iran, Iraq, Kuwait, Venezuela, Algeria, Angola, Ecuador, Libya, Nigeria, Qatar, Saudi Arabia, and UAE.

NAFTA (North American Free-Trade Agreement) - An agreement between Canada, USA, and Mexico to promote free trade. Eliminates tariffs on imports and exports to and from among these nations. A regulation implemented January 1, 1994 in Mexico, Canada and the United States to eliminate most tariffs on trade between these nations. The three countries phased out numerous tariffs, (with a particular focus on those related to agriculture, textiles and automobiles), between the agreement's implementation and January 1, 2008. NAFTA's purpose is to encourage economic activity between the United States, Mexico and Canada.

TPP (Trans-Pacific Partnership) - Ten years in the making, the Trans-Pacific Partnership is a trade agreement among 12 countries that geographically located around the Pacific Rim. In addition to the U.S., TPP member nations include: Japan, Malaysia, Vietnam, Singapore, Brunei, Australia, New Zealand, Canada, Mexico, Chile, and Peru. The TPP aims to open new markets, and address 21st century issues in the global economy, such as the free flow of electronic data across borders.

U.N. LAW OF THE SEAS (UNCLOS) - Negotiated in the 1970s at the U.N. Conference on Trade and Development is a treaty that sets forth regulations and economic provisions to control pollution of oceans and other marine environments. UNCLOS also establishes specific jurisdictional limits on coastline and ocean areas that countries may claim. Of late, UNCLOS has been discussed in relation to the South China Sea dispute.

WTO (World Trade Organization) - The World Trade Organization (WTO) is an international organization that deals with the rules and laws governing trade between world nations. The WTO agreements have been signed by most of the world's trading nations; its main function is to help producers of goods and services protect and manage their import-export businesses. The WTO has become the driving force underlying globalization during the past few decades.

Originally published on BiannaGolodryga.com: A Guide To Foreign Abbreviations and Acronyms