In the No Child Left Behind (NCLB) culture, teachers whose students perform poorly on tests can be fired for not meeting NCLB goals so there is little incentive, other than personal integrity, for teachers to report cheating.

That's a fact, says Gregory J. Cizek, who studies cheating at the University of North Carolina, Chapel Hill. "There is really no incentive to vigorously pursue cheaters," he says since under NCLB students who pull in good grades help ensure a teacher's employment while students who perform sub-par on tests can actually mean a pink slip.

In response to a recent cheating scandal that broke in suburban D.C., Cizek wagered that teachers and even some of the administration knew what was going on months, possibly years, before the story broke. "One of the problems is that the teachers didn't really care. I bet there were people who knew what was going on and turned a blind eye because there's really no reward and there's all kinds of hassles involved. Even fellow teachers will say, 'come on, you're going to have all these parents on your case. The administration is going to have to deal with it, it's a lose/lose all around."

Cizek's hypothesis -- that adults knew what was going on and let it continue -- is based not only on his two-decades plus research on academic cheating, but also on the nature of school gossip understood by anyone who ever attended high school. School gossip works this way, explains Cizek: if someone throws a rock at a school window shattering it, within the hour at least 50-percent of the student body knows the name of the rock-thrower and by the end of the day, Cizek estimates, an equally high percentage of teachers and administrators will have also heard the details of the rock-throwing incident. Cizek says it is, therefore, doubtful that after years of cheating the only adult in the school who knew about the cheating was the teacher who eventually picked up his whistle and blew it.

"We had been waiting years for him to be caught. Years!" says a teacher at a different school who had taught one of the students at the center of the suburban DC cheating ring. "Every time we went to the administration about another cheating episode, we were told not to pursue it and the cheating was swept under the rug."

Sounds like a three pointer for Cizek and his theory.

If one takes Cizek's theory into account -- that a school community (students, teachers and administrators) is a small place where everyone knows everyone else's business -- it's surprising and outrageous what happened at an Ohio school last year. In 2009, the Board of Education in Centerburg, Ohio, canceled graduation ceremonies after it came to the attention of board members that a graduating senior had hacked into school computers, stolen tests and given them to half of the senior class. According to Cizek's theory, not only did half the students know about the cheating, but half of the adults at the school knew as well. Yet, the students were the ones punished for not blowing the whistle.

Ultimately then, NCLB, enacted by Bush II in 2001, has created a negative environment in which learning is no longer the objective, but rather grades and, as it turns out, job security. Under NCLB, schools -- that is teachers and administrators -- must meet certain goals. Penalties for not meeting those goals (measured in percentages of As to Fs) can include loss of funding or, in many cases, teacher tenure. At a Rhode Island school recently, every staff member, from administrator to teacher (in total 93 people), were fired in one fell swoop. 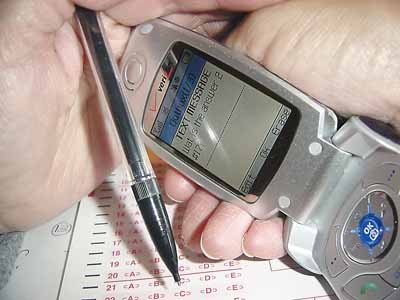 If teachers aren't reporting cheaters and students are being taught that grades are more important than substance, our schools are planting a poisonous seed that may bloom into a generation (or two) of cheaters. In other words, we are teaching that cheating pays. That begs the question: will all of our middle and high school cheaters grow up to be Bernie Madoff's? Doubtful, say the cheating experts with whom I spoke.

But, how do we really know? So many of our upstanding citizens, role models, politicians, corporate executives appear to be just that -- upstanding -- until a scandal breaks and then we see what's really been going on. What we really need is a cheating study that tracks students from high school into adulthood. Then we'll know for sure if there is a correlation. After all, the adage, "once a cheater always a cheater," doesn't necessarily have to refer only to adultery.

Pro-active changes must to be made before "Cheaters Anonymous" centers crop up as a post-graduate cheating cure.