"I can't define it, but I know it when I see it." -- U.S. Supreme Court Chief Justice Potter Stewart on pornography in Jacobellis v. Ohio, 1964

Consider some of the current controversies in organized sport: football inflation pressures, "flopping" and "diving" to deceive basketball and soccer officials, performance-enhancing drug (PEDs) cases, possible techno-doping via streamlined suits and artificial limbs, and the potential for genetic doping. 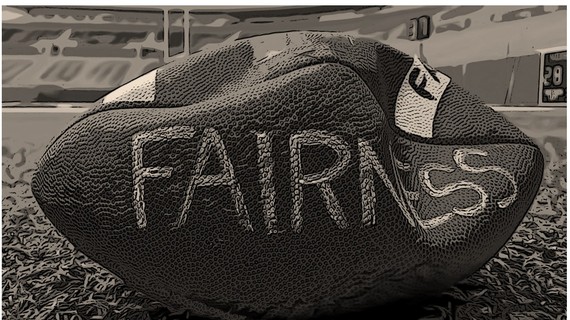 These and other contemporary issues pose unprecedented challenges to the integrity of organized sport. Accordingly, definitions and standards for what constitutes cheating vs. fairness have never been so needed or consequential.

However, many contemporary sport "cheating" controversies simply cannot be evaluated in an equivalently black and white framework.

Consider the ethical dilemmas the following situations pose for modern athletes and athletics: Is it cheating to take a new "designer drug" if: a) it is not banned, b) it enhances performance, and c) many of your competitors take it, and d) you are disadvantaged if you do not?

Is it cheating to fake a fall to induce a referee to call a foul on an opponent?

Is it cheating for an athlete seeking enhanced endurance to sleep in an altitude tent to boost red blood cell production when: a) the practice is not illegal, and b) other athletes do not have the means to do the same.

Is it cheating to use genetic techniques (rather than physical training) to activate dormant portions of one's DNA to improve muscle performance?

Three of the preceding scenarios presented themselves years ago, the fourth may or may not have yet occurred, but has been a credible threat for some time. All four pose major challenges to the health and integrity of sport.

Yet, while the integrity of sport depends on fairness, the commitment needed to provide it in a viable contemporary form does not seem to be in place. Hence, what is perhaps the greatest threat to both the integrity and health of modern sport - an onslaught of sophisticated techniques to gain advantage by any means possible - is under-recognized, under-resourced and inadequately addressed.

Even a cursory look at the problem makes clear that performance enhancement techniques have raced ahead while standards and policies have not. Athletes and coaches have acknowledged and openly complained that outcomes are unfairly determined by technology rather than ability. Leagues have implemented new policies only to quickly acknowledge they fail to remedy the fairness problems they address (see the NBA's flopping fines). Instructional videos for inducing foul calls on opponents have been published featuring leading players. "Dirty" athletes, like Lance Armstrong, pass hundreds of doping tests while "clean" athletes are implicated.

Some athletes, like Jamaican sprinters Asafa Powell and Sherone Simpson, have been banned for using substances that have no demonstrable effect on the mechanical basis of their performances. Additionally, on the eve of quarterback Tom Brady taking the National Football League to Federal court over a ball inflation controversy, i.e. "Deflategate", nearly 90 percent of the league's players polled disagreed with the league's procedures for handling player discipline.

Whether we like it or not, sophisticated performance enhancement has become an irreversible condition of modern athletics. Moreover, this condition essentially guarantees that the future health and societal impact of organized sport will be determined by definitions, standards, policies and enforcement - or the lack thereof.

At present, imbalanced incentives seem to favor the continued erosion of fairness in sport. The financial and other benefits of gaining competitive advantage via enhancement techniques are significant -- while the benefits of catching cheaters are not. Catching cheaters also carries the threat of economic and reputational harm if the perpetrators happen to be big stars. For track and field recently, the much more modest prospect of Usain Bolt potentially losing a race to a once-banned athlete, Justin Gatlin, caused significant discomfort at the highest levels of the sport.

While pessimism is in ample supply, particularly in the realm of doping challenges, modern solutions have begun to emerge. Effective formal mechanisms have been developed, largely by the Olympic sports which have faced more immediate integrity threats. These mechanisms include the establishment of an independent court, the Court of Arbitration for Sport, to adjudicate athlete cases and the establishment of a world-wide anti-doping agency (WADA). The US signatory of WADA, USADA has compiled an impressive record that includes exposing Lance Armstrong as a doper despite its limited resources.

The potential for consortia of scientists and other experts to adopt longer-term approaches that are pro-active rather than reactive in nature could emerge through efforts like the sub-2-hour marathon project. The project has brought together scientists and professionals from many disciplines (including this author) to use science to identify and promote clean approaches to improving human performance while simultaneously advancing the effectiveness of anti-doping practices.

The risk of inaction to the health and integrity of organized sport have been clear, if under-appreciated, for some time. However, because sporting fairness has become such a nuanced and complex entity, the Justice Potter solution of falling back on a standard of recognition for what cannot be clearly defined is not a viable one. Rather, meeting the modern enhancement challenge will require progressive, flexible and enforceable standards as well as the resources needed to identify and provide them. Without these, sport faces the ongoing prospect of damage by a thousand, "cheating-scandal" drips and the potential loss of the integrity its basic health requires.

Disclaimer: The author declares no financial interests related to the sub-2 Hour marathon project or the content of this column.

Professor and Director, the Locomotor Performance Laboratory at the Simmons School of Education and Human Development at Southern Methodist University