The idea that "the people" will take on and destroy "the establishment" is a utopian fantasy that corrupted the left before it corrupted the right. -- David Brooks

This election has hosted some interesting stages in the evolution of rhetoric. John McCain has shown us that Change means four more years of the same Bush Doctrine that brought us wars and conflict in Iraq, Afghanistan, and soon to be Pakistan, and Iran. Oh, and Russia. I'm sure I'm leaving out countries, too.

The evolution is most evident in the way pundits are throwing around words like Elitism and Populism.

Simultaneously, citizens are reminded that they should not be Elitist in their dismissal of Sarah Palin as unqualified, but they are also unequipped to lead a Populist, Democratic revolt in order to pump some new blood into the Washington machine.

Elitism, David Books reminds us in the correct first half of his New York Times op-ed, used to be a way to filter out the cons and crazies. It used to mean finding the best man or woman for the job.

Now, the media has redefined it as dismissing God and Guns, and asking Sarah Palin if she really thinks living in Alaska prepares her for negotiating with Medvedev.

But if you're looking for Populism to correct this dictionary contortion, think again. In the same breath, Brooks calmly explains that it's up to the elitist leaders to save the day. Of course, this implies that these magical leaders somehow got elected, unless Brooks is praying for a return to the simpler time of monarchy rule. Giving Brooks the benefit of doubt, let's assume he meant the Leaders got elected...elected by The People....The People living in a Democracy.

Because that's how democracies work. It's sort of like the self-chasing arrows in a Recycling logo. Sure, we need smart, wise leaders to lead us, but The People are responsible for holding those same leaders accountable come election time. The only way for The People to know what the hell they're doing in the election booths is through self-education. The only way they can stay educated is for the media to responsibly report news in a balanced fashion. 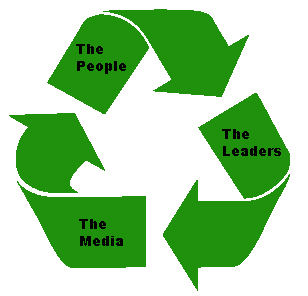 If the Leader arrow swells, we'll find ourselves living under an authoritarian dictatorship. Warning: if you live in America, you won't notice this transition because it's pretty much happened already.

If the People's arrow swells, there will be revolt. Disclaimer: If you've lost your house, your job, and your phone is being tapped, you may feel the strong urge to light a torch and head toward the White House.

If the Media arrow fails, the People are uneducated and they elect Bush for a second term, or the People remain largely silent when the U.S. invades Iraq. Thanks, Judy Miller.

Think of it as Reality's checks and balances. Elitists and Populists have always lived side-by-side in America, but questioning Sarah Palin about her resume, or asking for government regulation in the economy are not examples of Elitism or Populism, and there's no need to redefine these perfectly good words.

Carly Fiorina is no more an Elitist for saying Sarah Palin doesn't have the experience to run a major company let alone the entire country than John Edwards was a Populist for talking about the realities facing blue-collar workers.

Fiorina and Edwards are simply aware of what is happening to the country, and dividing up Reality into Elitism and Populism is like dividing the country into Blue and Red. Ghettoizing us doesn't remove Realism from Reality. It just creates vast confusion and bickering.

And then -- BAM! -- we all wake up a week later, muttering something about lipstick and pit bulls. It's a waste of time.