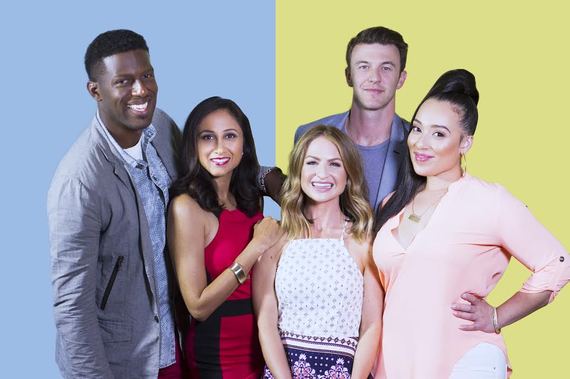 Anyone who is a child of the 90s will soon hit (or has hit) an age milestone in his or her life: Turning 30. While this writer has yet to hit this milestone, as it draws closer, I begin to reflect on that past while looking forward to starting a new decade.

A new web talk show entitled 30ish gives a unique perspective from this very age group. The panel talk show explores a variety of topics. It is live-streamed and produced by the Afterbuzz TV Media Group's BHL and includes many discussions and segments on topics that most people in the 30ish age range deal with in some form. This includes health, fitness, beauty, relationships, finance and entertainment. It stars Tony Moore, Maria Provenzano, Rasha Goel, Steven Helmkemp and Niena Drake.

The show is the brainchild of Tony Moore. Besides serving as one of the hosts, he is also a producer on the show. Moore has been active with AfterBuzz TV for some time now where he also hosts Dishin' Days, a recap and discussion show focused on the soap opera Days of Our Lives.

Moore (who is in his 30s, like every else on the show), believes 30-somethings give a different perspective on topics. "Something happens in your 30s when your perspective just changes." You feel like you aren't in your 20s anymore and life is starting to get a little more real. Your focus shifts and you really start to figure out yourself and who you are."

30ish will live-stream every Monday and Wednesday during the month of August (11 A.M. PST/2 P.M. EST). Each show will run for about 30 minutes. Moore hopes the show will continue past August, but will first see how audiences and viewers react.

Like mentioned, the topics will range. According to Moore, it will be a mixture. "It's based on what we enjoy, what we are talking about what's trending or experiences that we have had." he states. "Imagine meeting up with friends and just having casual conversations about an article you saw, or something you read on social media or something that's trending. That's how topics get chosen."

After watching the first 3 episodes, I enjoyed what I saw and heard. The co-hosts who are all from different backgrounds, gelled well together. I was told they did not know each other until the show was being created. Considering the revolving door of other panel talk shows is pretty impressive. They listened and engages in lively discussions. While they did not agree with each other on every topic, there was no forced drama. On the hand, the positive enthusiasm in my mind, did not appear fake either. They also kept the show going by not staying on one topic too long and easily transitioned from one topic to another. It flowed.

Where 30ish will go in the next few weeks is still unknown. However, while it may feel like there is a new talk show sprouting up all the time, there is a small void for a show like this. People in their 30s are at a unique time in their lives and talk shows (in any form) typically do not address or showcase this time in this type of forum. 30ish fills this void and hopefully it will continue to do so in the future.

30ish is live-streamed every Monday and Wednesday 11 A.M. PST/2 P.M. EST on AfterBuzz TV Media Group's BHL YouTube channel. If you miss the episode or want to re-watch one, all the episodes can also be viewed on YouTube. The first 3 episodes are below.