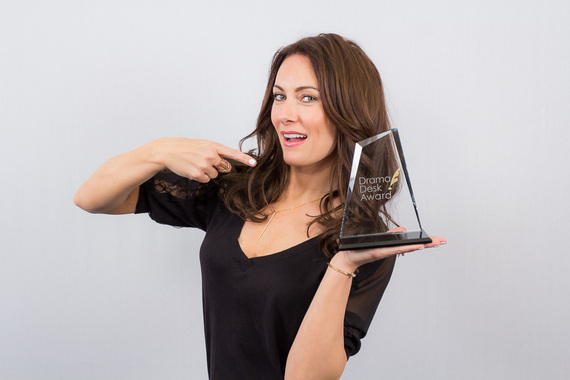 About being a part of this annual tradition, Benanti said, "third time's the charm!" Broadway's quadruple threat (singing, acting, dancing, and wisecracking) and a two-time Drama Desk Award winner herself, Benanti quickly added, "Oh wait... I'm hosting this for a second time? Well, I'm sure it will be fine."

An exciting evening for the theater industry and fans, Benanti's got a lot of exciting evenings ahead on primetime TV too with CBS' "Supergirl," and back on Broadway, starring in the 2016 revival of She Loves Me.

I spent time catching up with Benanti who shared some of her award show traditions, why she doesn't age (at least on Krypton), and which awards organization would win in a fight on the playground (with a kick ball change).

Schonberg: Laura! You know I loved you in the New York Spring Spectacular, saw it twice even. You've got a bunch of projects coming up, but next is the Drama Desk Awards. Tell me about the event.

Benanti: Well, I'm hosting the Drama Desk Awards, which many people liken to the Golden Globes of the theater [selected by media professionals focused on theater], except for the fact that instead of being on television, we are live-streamed on TheaterMania and we don't have booze. Those are the two major differences, but I'm very excited to host.

I hosted last year, and it was just such a blast. The theater community is such a small, tight-knit community that it's just like hanging out with your pals and seeing your friends, which feels really fun and nice. I'm writing my material and co-writing the rest of the awards [show] with Bill Rosenfield, who is a great writer.

Schonberg: Good news for Laura-philes as I call them (okay... and me) to hear that you are hosting, and that you are part of this tradition. But tell the readers at home, what are the Drama Desk Awards all about?

Benanti: It is the only awards show that honors Broadway, off-Braodway, and off-off-Broadway, so it's more inclusive than any award show that you are going to find really anywhere, but especially around the New York theater scene. So that's why it's nice, is it's not just Broadway and it's not just off-Broadway. It's everybody.

Schonberg: Sure. When you are not hosting something or picking up a nomination or two or five awards, what other award shows are you a fan of... the TONYs, Oscars or the Golden Globes, perhaps?

Benanti: I mean, I love the TONYs obviously, and I think they are the most entertaining of all the award shows just because you get all the performances, but I love watching the Oscars [too]. I really do. I used to love watching the MTV Music Awards until I didn't know who anybody was anymore, because I got too old. Like, "I don't know that person. Never mind. I'm no longer interested."

I love watching the Oscars. I like the pre-show. I love the red carpet. That's my jam. I like to sit in my sweat clothes and drink alcohol and judge people who have been nominated for Academy Awards based on what they are wearing. It makes me feel better about myself.

Schonberg: That's funny. I was actually just going to ask you, are you an award show nerd like.. um...some of us and do you go to viewing parties, or do you sit at home in your PJ's and eat ice cream?

Benanti: Sit at home, yeah. Just in case I start crying, I'm by myself. I'm joking. I don't cry.

Schonberg: Okay, okay... I need you to help me settle something. If theater awards season was a revival of West Side Story, who would win in the rumble? The Drama Desk Awards team or the TONY Awards team?

Benanti: I'm going to say Drama Desk because we are scrappy.

Benanti: We are definitely the Sharks.

Schonberg: Whoa. I just had a vision of you doing a little chasse across a playground.

Benanti: See, but Steve remember, nobody wins in war, so it's really just a hypothetical.

Schonberg: You can't play favorites obviously but among this year's nominees, what shows did you see and how excited are you for the season overall?

Benanti: I'm extremely excited by the season overall. I feel like it's an incredibly eclectic one and one that's inclusive of many different genres which makes me happy. Obviously Hamilton, like, took over the world. I love Lin-Manuel [Miranda] so deeply, so I just feel so excited for him. There are so many fantastic shows that I am rooting for. That's all I can say without being fired.

Schonberg: Fair enough. You have a million nominations and wins across the TONYs, Drama Desk and Outer Critics Circle awards. I heard that you're moving. Just curious if it's to a bigger place where you can set-up a special awards room. Or do you have one already?

Benanti: No. I just keep them on my piano. There's not that many of them. Let's not fool ourselves. There's just a few. Not yet. But that's how I pronounce it: "pee-AH-no."

Schonberg: Oh yes, on the "pee-AH-no"... but of course. So, wow, as far as "Laura on TV" goes, we'll see you soon in the much-anticipated "Supergirl" series on CBS. Do tell!

Benanti: When it was announced, I was so excited. I play Supergirl's mom back on Krypton. Everyone is Tweeting me like, "how on earth are you playing her mom?" First off, everybody calm down. Nobody ages on Krypton, #I'mMovingtoKrypton. You will see me in flashback and [as a] hologram. Then also something that I can't tell you about, which I'm really excited for, but it would be a spoiler.

Schonberg: You leave me anxious to hear, but yes.

Benanti: It looks beautiful. It looks like a movie. I'm very excited about that.

Schonberg: Plus, what's this I hear about a Laura Benanti book!?

Benanti: The book is a series of comedic essays, so just like my take on this crazy world we live in. Then I'm in [the Broadway revival of] She Loves Me, which is really exciting.

Schonberg: I know! So terrific. Were you a fan of the show before, or was it sort of new to you?

Benanti: Yes, I have been a fan of the show for a long time. I think it's just absolutely beautiful. I'm really really excited to be a part of it.

Schonberg: That's great. This year, well next year, is sort of this big celebration of Sheldon Harnick's work with Fiddler on the Roof, as well. Curious, were you, or are you, a big fan of his?

Benanti: Yes, I am a big fan of his work. I think that his music is very emotional and beautiful and tells a story in a really intimate way that just like cuts right to people's hearts.

Schonberg: Plus, you've worked with some pretty handsome men. How excited are you to work your soon-to-be co-star in She Loves Me, cutie pie Josh Radnor?

The Drama Desk Awards will be livestreamed on TheaterMania on May 31, beginning at 8PM.

Steve Schonberg is the editor-in-chief of www.centerontheaisle.com.