SAN FRANCISCO (AP) — They boost their teams from the sidelines and promote them by appearing in calendars and at fan events, but some sports cheerleaders say they are still not considered team employees and are paid what amounts to less than minimum wage.

California legislation believed to be the first of its kind in the nation is set to change that.

The bill approved by the state Senate on Monday and sent to the governor for his signature would require that cheerleaders be paid at least minimum wage and overtime and sick leave if they work for professional sports teams based in California. 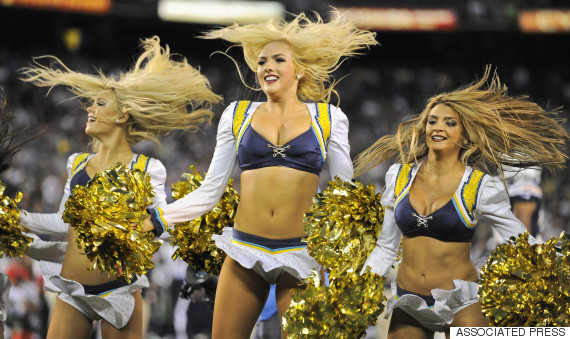 "Everyone who works hard to provide a great game-day experience deserves the same basic level of dignity and respect on the job, starting with simply being paid for their work," said Assemblywoman Lorena Gonzalez, who authored California's legislation.

A similar bill was introduced in New York state this year.

The focus on cheerleader pay comes after a spate of recent lawsuits against NFL teams alleging they did not pay cheerleaders for hours they spent practicing and making public appearances. Attorneys for some of the cheerleaders say the legislation is good but existing law is already clear that cheerleaders are employees entitled to minimum wage.

"It's nice to have clarifying legislation, but I don't think it changes the state of the law at all," said attorney Sharon Vinick, who represented former Oakland Raiders cheerleaders in a lawsuit against the team.

Raiders cheerleaders were paid $125 per home game, or $1,250 per season, in a contract that included hours of unpaid rehearsals and charity and commercial appearances, Vinick said. That translated to less than $5 an hour.

Vinick reached a $1.25 million settlement last year on behalf of dozens of Raiderettes who worked for the team from 2010 to 2013. He rejected the team's classification of the cheerleaders as independent contractors, saying the team decided what dances they performed and music they used and set strict requirements for them.

The attorney also rejected arguments that the women were receiving exposure that could open up opportunities in modeling or other fields. 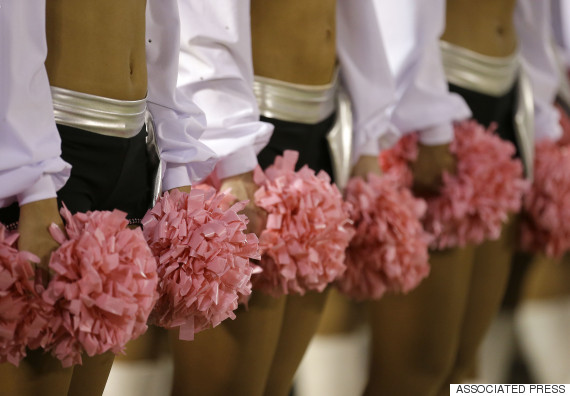 In this Oct. 6, 2013, file photo, Oakland Raiders cheerleaders hold pink pom-poms for breast cancer awareness before an NFL football game between the Raiders and the San Diego Chargers in Oakland, Calif. California lawmakers are sending Gov. Jerry Brown a bill making it clear that professional cheerleaders are sports team employees. The bill approved by the state Senate on Monday, June 29, 2015, would require that cheerleaders be paid at least minimum wage if they work for professional sports teams based in California. AB202 says they would have to be paid for overtime and sick leave, the same as other employees. (AP Photo/Tony Avelar, File)

"If you are a young starting quarterback, you get lot of notoriety for that, but you also get paid for that work," she said. "The fact that the women might get some opportunities doesn't justify not paying them."

Buffalo Bills' cheerleaders were not paid at all, even for game days, said Sean Cooney, a partner at the Dolce Panepinto law firm who is representing six cheerleaders in lawsuits filed last year that name the team. The cheerleaders also had to pay for their uniforms and hair and makeup.

"All because it was a job they like, that they were told was a privilege," Cooney said.

Calls to Bills and Raiders' representatives were not immediately returned. The Raiders in court documents said the cheerleaders' lawsuit should be handled by league arbitration.

The New York Jets, Cincinnati Bengals and Tampa Bay Buccaneers also have been sued over cheerleader pay, with the Buccaneers reaching a settlement this year.

The NFL declined to comment on California's legislation. NFL teams are advised to follow state and federal employment laws, and team cheerleaders are not employed by the league.

Cooney said the Bills cheerleaders also are suing the NFL because it approved an agreement that classified them as independent contractors who would not be paid.