It was a packed house at the Middlebury College student center on Tuesday night. The College Democrats set up the old natatorium, retrofitted into a greasy late-night food joint, and brought down the giant scroll-down screen to stream the first Democratic debate. Across the country students went to parties put together by College Democrats, clubs to support candidate, or any number of other groups. At Middlebury, two political science professors served as commentators for the debate giving an introduction to expected strategies as well as their insight during commercials.

The evening began with a bit of a cheer off between the Hillary and Bernie supporters. Although Bernie supporters were louder, there was a vocal cohort of Clinton fans. Later on, during candidate introductions the students shook the room when Bernie entered onto the stage. 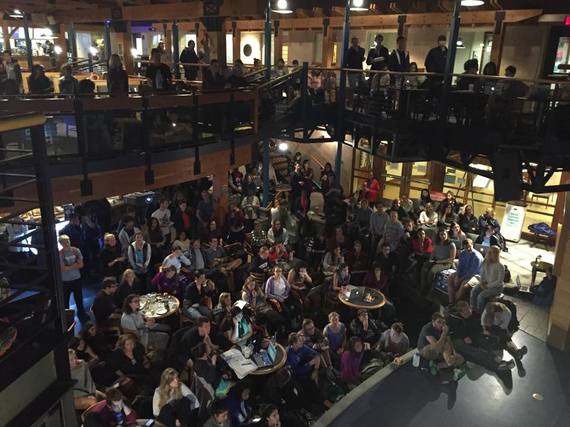 The Middlebury College student center was a packed for Tuesday night's debate. Photo by Julian Gerson.

At Middlebury College, a rural Vermont liberal arts school and headquarters of the College Students for Bernie movement, I learned a few things about my peers. From talking with students who attended debate parties across the country, I learned even more. Here's a quick run down: