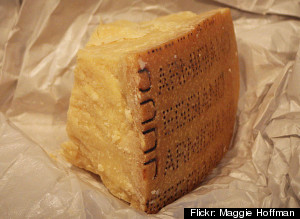 by Kirstin Jackson, Cheese Expert for the Menuism Cheese Blog

Milk and its relatives, like ice cream or cheese, have been known to aggravate a few tummies in their day. Secure about itself and its place in the world, dairy just goes out there and does its thing without worrying about rubbing anyone in the wrong way. Many times this works out. Other times, not so much. If you have been rubbed wrong by straightforward dairyness, fear not. Different milks are made up of many components that affect (or don't affect) people in various ways, and milk undergoes many chemical transitions on its way to becoming cheese. More likely than not, there is a way you can embrace the dairy world in cheese form.

If dairy doesn't always agree with you, three possible reasons for the aggravation follow. Feel free to play around to see if you actually have more dairy leeway than you think. Quick note, I am not a doctor, nutritionist, or in the science profession -- I'm a cheese and wine professional and writer. The following ideas are ones that I've researched and read about, but are in no way substitutions for medical advice or for you listening to your own body.

1. Lactose. Lactose is a sugar -- a carb -- in milk. According to Paul. S. Kindstedt in Cheese and Culture, lactose tolerance is more prevalent in folks that have some Northern Euro ancestry because their ancestors developed a genetic ability to digest lactose as adults. These Neolithic ancestors migrated from southwest Asia and developed this ability around 5,000 BC in the Balkan and Central Europe area, says Kindset. Humans can nearly all digest lactose as children, but some lose the ability to do so with age.

However (a big yay!), cheesemaking is all about ridding milk of lactose. When milk is made into cheese, the lactose sugar converts to lactose acid. The older the cheese, the less lactose. Parmesan and old, crusty goudas? Hardly any lactose to speak of. And sometimes even young cheeses (especially ones left to acid-set over night) have had much of their lactose leeched off when the curds (proteins, solid matter) are separated from the whey (the liquid).

So if you think you might be lactose-intolerant, try cheeses with less lactose -- the aged ones. Most of the lactose should have morphed into lactic acid by the time it gets to you.

2. Milk protein. One of the components of milk is protein. Amino acids, to be specific. If you are allergic to the milk protein, this is something completely different than being lactose-intolerant. It's a protein thing, not a sugar thing. However, different milks are made up of different proteins. Goat and sheep's milk, for example, are formed with shorter amino acid protein chains than cow's milk, and many folks who are bothered by cow's milk have little to no problems eating goat and sheep's milk cheeses. Play around.

3. Pasteurized milk. When milk is pasteurized, it is ridded of a lot of potentially harmful bacteria. Unfortunately, many good bacteria are also killed, and some of those beneficial bacteria help break down milk in bodies. And they taste good to boot. Try raw milk cheeses. Ask your cheesemonger to recommend some. They're not illegal, so don't worry about being arrested by the dairy police. If a cheese is aged over 60 days, it's allowed to be raw. Just like your love for cheese.

Related Links from the Menuism Cheese Blog:
• Artisanal Cheese 101
• And They Called Them Stinky (Great Stinky Cheeses)
• All About Goat's Milk Cheese

Cheese for the Lactose-Intolerant originally published on the Menuism Cheese Blog.

Kirstin Jackson is a professionally trained cook, wine bar manager and cheese program director, food and wine writer, consultant and instructor, whose fridge and head is almost entirely consumed with cheese. Her cheese blog, "It's Not You, It's Brie," was launched in April 2009, and has since received accolades from Blogs.com, Foodista, and Apartment Therapy's The Kitchen.