Greyhounds, on the other hand, seem to take the same number of strides per second at every speed.

Cheetahs have been recorded running at up to 65 mph (105 kilometers per hour) — much faster than a greyhound, which, as the fastest canid (doglike animal), is known to reach 43 mph (68 kph). [10 Things You Didn't Know About Dogs]

"Cheetahs and greyhounds are known to use a rotary gallop, and physically they are remarkably similar, yet there is this bewitching difference in maximum speed of almost a factor of 2," study researcher Alan Wilson, from the Royal Veterinary College in the United Kingdom, said in a statement.

The researchers studied cheetahs from the ZSL Whipsnade Zoo in the suburbs of London and the Ann van Dyk Cheetah Centre in South Africa. They also studied retired racing greyhounds from the United Kingdom.

They planted force-measuring plates in the ground and had the animals chase after a piece of chicken. They took high-speed video of the animals in motion and measured the force created by the running animal, calibrated with how much it weighed.

The cheetahs being studied didn't come close to the speeds reported for wild cheetahs — the zoo animals reached 38 mph (61 kph), while the greyhounds topped out at 43 mph (68 kph).

The researchers said this was probably because the captive-born cheetahs have never really gotten the chance to let loose in the wild and run full throttle.

"They have lived in a zoo for several generations and have never had to run to catch food. They have probably never learned to run, particularly," Wilson said. "The next stage is to try to make measurements in wild cheetahs in the hope of seeing higher speeds." 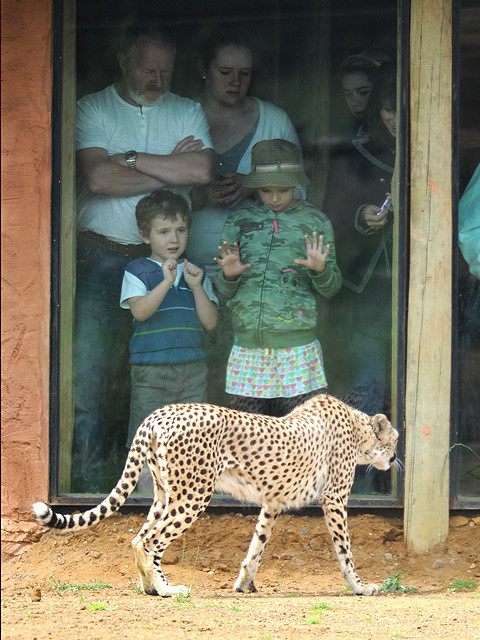 Cheetah in his enclosure at the ZSL Whipsnade Zoo, in the United Kingdom.

The researchers did find a few differences, however; for instance, the cheetah's stride was slightly longer than the greyhound's.

Wilson suspects wild cats may be able to reach frequencies of four strides per second, which, in combination with longer stride lengths, may be what allows them to outstrip their poochy counterparts.

The study was published today (June 21) in the Journal of Experimental Biology.

Copyright 2012 LiveScience, a TechMediaNetwork company. All rights reserved. This material may not be published, broadcast, rewritten or redistributed.
More:
BiologyAnimalszoologyscienceVideo