Crawfish season is officially upon us and to celebrate, I journeyed last weekend from downtown Austin up to the Cedar Park Center for a mud bug throwdown at the inaugural NOLA, Texas Food and Music Festival, which included a VIP brunch with Chef John Besh. I have to admit, I'm usually more enthusiastic about the ritual of a crawfish boil than the act of sucking the brains out of the critter and working for the tiny tail meat, but the promises of food created by the James Beard award-winning New Orleans chef was enough to get me out there with gusto.

As it turned out, the weather could not have been more gorgeous, with clear blue skies and temperatures in the 70s. Outside Chris "Shaggy" Davis (aka "The NOLA Crawfish King") was boiling 1000s of pounds of crawfish, which was in fact delicious. Musical stylings from Austin and New Orleans heroes like Bob Schneider, Asleep at the Wheel and Dr. John filled the air. 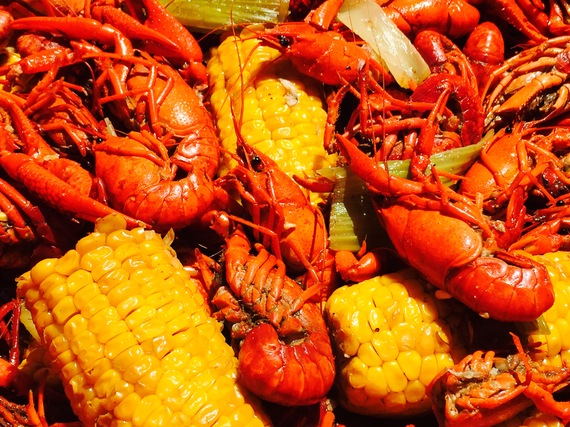 Photo by Chris "Shaggy" Davis. He took the phone out of my hand to get this crawfish full frontal.

Inside the arena, however, the chance to watch John Besh cook the food that made him famous and then get to eat said food was the biggest treat for me. He recently wrote a book called Besh Big Easy: 101 Home Cooked New Orleans Recipes and the menu included some excellent dishes from that list like duck, oyster and andouille gumbo with jasmine rice, as well as others from the same family like pork neck and chicken thigh Jambalaya, and shrimp and sausage gravy over baked jalapeno cheesy grits and slow cooked eggs. While Chef Besh demoed how to make the gumbo, he dropped some fun facts about his philosophies on cooking: apparently outside of tomato season, Rotel is a perfectly acceptable substitute for tomatoes in a stew-style recipe and most importantly, the foundation of some of the best meals are made of "really simple food, which don't need to be all that." Bringing people together is the important part and much of the action happens with just one pot.

I came home with a copy of the new book and I'm cautiously optimistic about my own ability to produce its contents, like the killer gumbo recipe that he generously shared below. I might even bring it to the next crawfish boil on my calendar this season, because especially in Austin, I know there will be many. 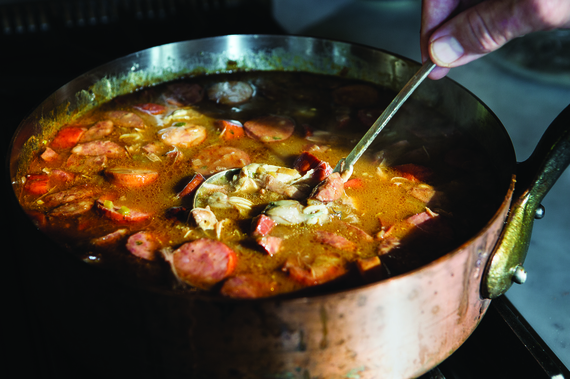 Make a roux by heating the oil in a large heavy-bottomed pot over high heat. Whisk the flour into the hot oil. It will immediately begin to sizzle. Reduce the heat to medium and continue whisking until the roux turns a deep brown color, about 15 minutes. Add the onions, stirring them into the roux with a wooden spoon. Lower the heat to medium low and continue stirring until the roux turns a glossy dark brown, about 10 minutes.

Season the duck well with salt and pepper. Add the duck pieces to the pot, increase the heat to medium, and brown, turning the pieces, for about 10 minutes. Add the smoked sausage and stir for 1 minute or two; add the bell pepper, celery, and garlic. Cook, stirring, about 3 minutes more. Add the green onions, chicken stock, and bay leaves. Bring the gumbo to a boil, stirring occasionally. Reduce the heat to medium low and simmer for 45 minutes. Stir occasionally and skim off the fat from the surface of the gumbo (moving the pot half off the burner helps collect the impurities).

Add the andouille sausage and Worcestershire and season with Tabasco, salt, and pepper. Simmer for another 45 minutes, continuing to skim fat from the surface. Just before serving, add the oysters and their liquor. Serve the gumbo in bowls with rice.