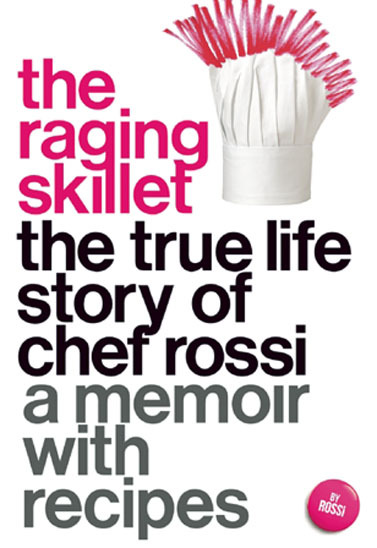 This week I talked with Chef Rossi about her new must-read memoir The Raging Skillet. Chef Rossi's story is a fabulous journey of cooking her way through some of life's biggest challenges in New York City's most unlikely kitchens. Talking her way into any cooking job she could get, Rossi is a self-taught and self-made entrepreneur who ended up owning one of the most sought-after catering companies in the city. Zagat dubbed her as "the wildest thing this side of the Mason-Dixon Line." The book features anecdotes from a life of food spanning decades in NYC plus easy to follow recipes ranging from pizza bagels to tuna tartare completing each chapter. I talked to Chef Rossi about the inspiration for her new memoir and her spin on our LGBT issues.
LISTEN:

When asked what she would like to see happen for LGBT equality in the next few years Rossi stated:

I would love it if it wasn't a question anymore. Now of course we have marriage equality but I would like it just to be so normal. Like you don't really say 'Oh I'm gay' just like people don't really say 'Oh I'm straight.' I would love it just to be part of the fabric of our lives. You're gay, you're straight, you're black, you're white, it's all of one. We're all equal, we're all happy, we're all loving, we all have the same rights. You know here in New York we're spoiled because I can walk down the street holding my girlfriend's hand and not have to worry. It was not always like that. There was a time even in New York when in Central Park men were throwing rocks at me and my girlfriend because we kissed. Nowadays I see young couples, gay couples, happily holding hand, not even thinking about that. They don't have that trauma and I would love it if no one had that trauma. Generation after generation of nobody knowing what it's like to be gay bashed. I'd like to go to Oklahoma and Arkansas on my book tour. I'm going to all these places, I just got back from Denver and I'll be going to St Louis. I'd like to travel around the world and around the country and have it not be an issue. You know we're all just people.

Chef Rossi is the catering director, owner and executive chef of The Raging Skillet catering for the past twenty-three years. She has earned a reputation as the go-to company for out-of-the-box catering and weddings. The Raging Skillet has been voted one of New York's Top Five Wedding Caterers by The Knot from 2009 through 2015. The release date for her new Feminist Press memoir The Raging Skillet is scheduled for November 10th then kicking off the book tour at Henriettas in NYC on Nov 11th, followed by November 12th at WORD Bookstore in Jersey City, NJ at 7:30P, then November 17th at Powerhouse Arena in Brooklyn, NY at 7P, next November 19th at Trident Bookstore & Café in Boston, MA at 7P, followed by November 22nd at Preservation Hall in Wellfleet, MA at 3P and December 3rd at The Green Building in Brooklyn, NY at 6P for the Feminist Press Challahday Party. Chef Rossi is also currently touring with the Jewish Book Council.
For More Info: chefrossinyc.com