There is an undeniable zeitgeist surrounding a return to artisanal living. From flower arranging to jam making, many technology saturated people are excited to break from the incessant tweeting, facebooking and texting to slow down, take a breath and make something tangible. Which is why it seems like now is the perfect time to get in on the trend and speak with Angeleno artisan extraordinaire Jen Smith of Full Moon Pickles and Preserves. Despite having grown up eating mainly industrial food, when Smith was a teenager in Virginia she had the desire to make a homemade pie, something she could not remember ever having eaten before. A month later, she entered a local county fair pie contest and placed with her peach pie. She's been exploring the world of food ever since - focusing on how it is grown, the politics of its production and the history of food preparation and consumption.

Equally passionate about food and art (she recently earned a MFA from the University of California, Irvine), Smith has managed to blend her interests into a fruitful career. She has become a sought after caterer in Los Angeles's event-heavy fashion and art worlds, consistently serving up rustic and seasonal fare. When she's not cooking for others, Jen is most likely partaking in the old-fashion act of canning. Pickles, preserves, sauces and krauts - she does it all. Her recently launched Pickle of the Month Club has attracted numerous subscribers, who patiently wait each month for what Jen calls "five jars of magic." Have we piqued your curiosity? 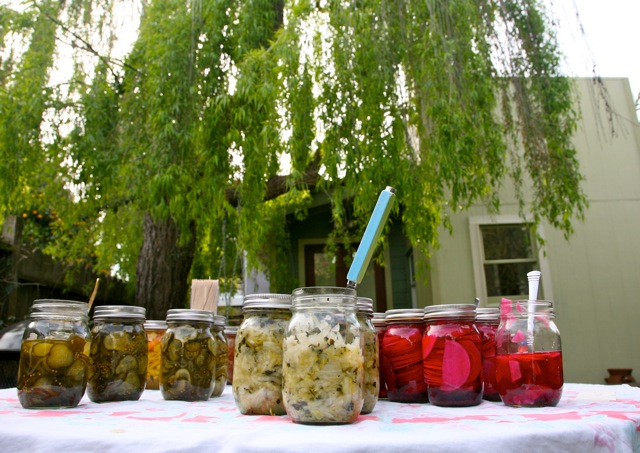 Heather Taylor: What kind of food did you eat as a kid?

Jen Smith: Food from boxes and frozen bricks of vegetables. But also regional foods from the mid-Atlantic, like Chesapeake Blue Crabs and Scrapple, a kind of loaf made from pork offal and spices.

HT: What is your earliest memory of cooking? And when did your passion develop?

JS: I remember "cooking" experiments as a young child while my parents were asleep -- potato chips in water, not very good! I became a vegetarian at the age of fourteen (and remained one until my early thirties) when I began cooking in order to nourish myself. I worked at a health food store in Washington, DC in my early twenties and it was there that I began to want to try everything that I had never seen or eaten before - every vegetable, every fruit. This curiosity still guides and thrills me.

HT: And when did you start canning?

JS: I began in earnest during the summer of '09. I had returned to California from my grandmother's funeral. She had been a very important figure in my life. She was Norwegian, born in 1915, very frugal, practical and warm. A lovely woman! And from a generation that really took care of eating in a different way. I remember her making strawberry jam from berries she grew. Sort of incidentally while on that trip, I picked up a jar of pickled okra -- a really fantastic southern pickle -- that you can't really get in California. Okra was in season here and I decided to make my own. Later, I got a very small inheritance from my grandmother and bought my canning equipment in her memory.

HT: That's lovely. What is something you recently canned that you are excited about?

JS: Loquat compote! Loquats are a fruit that really hangs heavy (and briefly!) in the trees here, and I had never really eaten them before. There is so much of it around, so figuring out how to use it was great. I also made a chutney but the compote (with sugar and pepper) was much more delicate and interesting to me.

HT: Tell us about your pickle of the month club?

JS: The Pickle of the Month club is $40 a month for five jars of magic! So, really, it is pickles and preserves and sometimes other things. Every four to six weeks, a new set of jars comes out and features whatever fruits and vegetables that are happening in a given month-- the season's best. There is a small joining fee which goes towards reusable mason jars and a delivery fee, if folks want me to bring it to them. Otherwise, I host a Pickle Party where there are new tastings and people can pick up their monthly subscription. These are really fun for me because a little community comes together around pickles, and suddenly pickles become social! These jars of magic are EXTREMELY hand-made, and I am often doing this work alone. So having a party to talk about preserving is very, very satisfying! 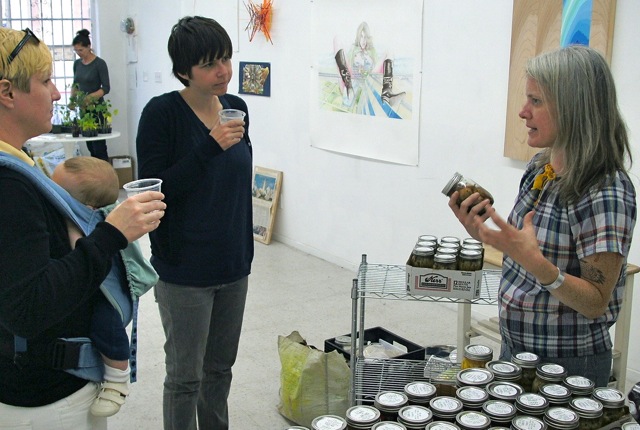 Jen Smith with guests at a recent Pickle of the Month event. Photo courtesy Jen Smith.

HT: I know you have an art background. Can you talk a bit about how you made the leap from art to food and how they connect for you.

JS: Art making and cooking are central life practices for me - both make me feel good about being alive. So there hasn't been a formal decision to pursue one over the other.

I often feel like art is an eccentric pursuit, and eating is something that every human has to do daily. Getting out of graduate school in a poor economy, I have been trying to figure out how to support myself on my own terms. In terms of the way the two connect, there is the obvious relationship between making something with one's hands and creativity. But also I see the impulse to preserve food as a sort of utopic response to excess and bounty. My formal art work also deals with excess but from a dystopic perspective.

HT: Is Los Angeles central to your practice?

JS: Los Angeles is like the garden of eden! So many fruit baring trees that seem to function strictly as ornamentation. People, that's food! Let's eat it! Responding to this abundance by cooking and canning makes me feel closer to the earth, which for me, in Los Angeles, feels critical. I know that this idea of eating local is en vogue right now, but remembering that we are tied to the soil, to the earth, is something that connects us to our own experience as embodied humans. It is very easy to forget when confronted with a microwavable bag of broccoli that this food was grown in the ground and tended to by human hands, human labor.

HT: What are you favorite markets?

JS: I love the Farmer's Markets, of course. Hollywood is my local. But I really love the international markets. There are so many cultures here that really care about food. My favorite is Super King on San Fernando Road which is always a ZOO! It is very affordable and people are very excited about food there. I love standing over a bin of fruits I am unfamiliar with and asking people what they are, how they are used, etc. I have had other customers there tell me to try a particular Armenian cheese and what to pair it with. It's a warm and hectic environment, really fun. 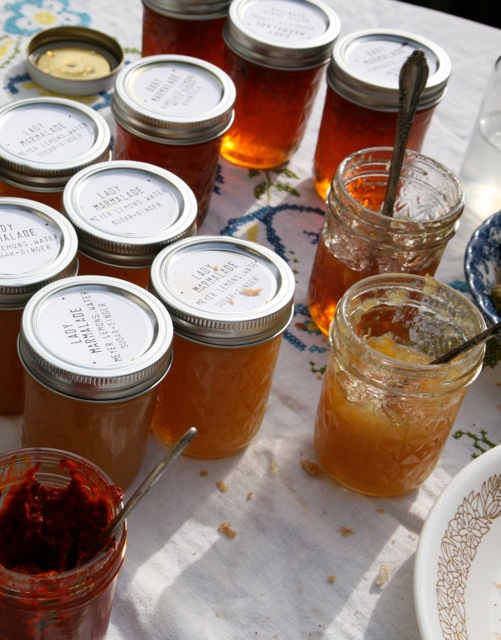 Instructions;
Combine all ingredients in a BIG, non-reactive pot. Bring to a boil, then reduce heat to a medium boil. Skim off any foam as it appears. Boil the jam until a drop mounds on a chilled dish. A good gel happens at 220 degrees, which can be determined by a candy thermometer.

Ladle the jam into half-pint jars, add lids and rings, and process jars for 10 minutes in a boiling-water bath.
When the jars come out of the bath, allow them to cool. You should hear a pop sound and a tight seal should be form by the lid. If the lid is still slightly domed, the seal is not good. Unsealed jars should be stored in the refrigerator and enjoyed soon. Otherwise, store in a cool, dry, dark place for up to a year.