For the congresswoman leading the fight for better laws around food waste, using up leftovers was just a way of life.

“I come from New England, home of Yankee thrift,” Rep. Chellie Pingree (D-Maine) told The Huffington Post. “Wasting food wasn’t even a concept. But I realized, once I grew up, that this wasn’t the case for most Americans.”

In December, Pingree introduced the Food Recovery Act and the Food Date Labeling Act in the House ― the first-ever congressional bills on the issue. The legislation takes an expansive view of food waste, with provisions on everything from farm waste to imperfect produce to more extensive USDA research.

Pingree gave HuffPost an inside look at her campaign during a phone interview that touched on how food waste intersects with cultural values, climate change and education.

How did you first become interested in food waste as a target of legislation?

It first came to my attention at The New York Times’ Food for Tomorrow conference in 2014. That opened up my awareness of how much we’re throwing away: about 40 percent of all the food produced each year! It sounded so massive that I wondered how we’d possibly go about tackling this. I also heard Jonathan Bloom [the author of American Wasteland] speak, and I realized that this isn’t just a matter of ideology: it’s a real, tangible problem that the government can impact positively.

What is your personal background with regard to food waste?

I come from New England, so we had that Yankee notion that nothing should be wasted, ever. I’ve lived on a farm for much of my life and even have one today [Turner Farm in North Haven, Maine], so I’ve never thought twice about keeping a can on the countertop for food scraps or compost, or reusing food as animal feed. But I realized that America has really lost a generation of people who know how to use leftovers or freeze their food. Many people, for example, never knew it was OK to keep a compost bucket on their countertop!

Is this a bipartisan issue?

Absolutely. The chairman of the House Committee on Agriculture, Rep. [Mike] Conaway of Texas, is a Republican and has been a great partner on this: he organized a hearing with experts in food waste and industry stakeholders. I see it as an issue that doesn’t have a lot of organized opposition. And even in the corporate sphere, our bill has received endorsements from Campbell, Nestle and other huge food companies.

Do you think any legislation will pass before the August recess? If not, what’s your realistic timeline?

Let’s face it, it takes a long time to get things through Congress. Our bill is very comprehensive, and especially this year, an election year, we may not get it all done. But we’re going to try and tack on some pieces ― like expiration date labeling, or funding for waste research ― as appropriations on other bills.

What are some facts about food waste that would surprise most Americans?

First, there’s the mind-blowing fact about 40 percent of our food supply is wasted annually. And against that backdrop, 15 percent of Americans still go hungry or are food insecure. Also, food waste is also a huge source of pollution: when it breaks down in landfills, for instance, it produces methane, a worse greenhouse gas than carbon dioxide.

On a personal or household level, what can people do to reduce their food waste? For instance, you mention your own “Yankee thrift,” but many other cultures or families value abundance, or overabundance, which is hard to shake.

It’s true that there are some cultural incentives to waste food, but I actually think an equally strong impulse is that nobody wants to contribute to greenhouse gases and global warming. Of course, this requires that people know that wasting food has this effect, so public education is very important. Another powerful connection is that less wasted food means assisting folks who are going hungry.

It shouldn’t be a value to have too much food and waste it. Maybe we can change our idea of hospitality so that we brag to our guests that, for instance, we were going to throw away bread but turned it into bread pudding. A culture shift is not impossible. In the restaurant world, food waste was hardly a popular issue when Dan Barber spent almost a month turning unsightly vegetables into meals. But he got everyone talking!

I also think, on the values front, kids will be leaders in the food waste effort. Think about recycling: elementary school kids took the lead on that. They started by sorting waste in schools, and kids brought that knowledge home, and “translated” the practice for their parents.

The Food Recovery Act is quite comprehensive, but what would you single out as a key provision?

One of the pieces we think has the highest cost-benefit ratio is date labeling: making food labels more specific. It should be very clear to the customer if the date is a sell-by, eat-by or throwaway date. That confusion probably causes a significant portion of food waste at home.

Another section of your bill references new research. What kind of research do you suggest the USDA conduct into food waste technology?

We definitely need more data about different products’ shelf lives. We have to run on conservative estimates unless research proves otherwise. We also need more research on waste allocation: where the food gets wasted, and what institutions are the biggest sources of waste. The USDA used to have a designated position to oversee exactly this type of research, but it was eliminated in the Clinton administration. We hope it can be reinstated. In the meantime, the organization ReFED produces a really wonderful report with great data on date labeling.

Are there any countries or places in America that legislate food waste better than our country as a whole?

Vermont has set a date by which there can be no more organic matter in landfills. San Francisco is moving towards mandatory composting. In Portland, Maine, there are now two different companies that do curbside compost pickup. Based on this, I think it will be important for Congress to offer assistance to municipal waste facilities ― big changes can happen on a municipal level, but not every city has the same resources.

Looking abroad, the U.K. has done a lot to reduce grocery store food waste across the board. And France recently took the great step of mandating that grocery stores donate, rather than throw out, their unsold food.

What’s a realistic target for reducing our food waste levels? You’ve said that we waste about 40 percent of all food in the U.S. Is the target eventually zero percent?

The ideal, of course, is zero percent, and I still believe that should be the ultimate goal. Particularly because of the climate change implications, we have to be ambitious. The USDA’s goal is “Zero by 2030.” But the timeline is within our control. A state can just ban organic matter tomorrow. Our proposed bills are a guide, not a mandate. It’s up to the stakeholders ― and there are many ― to work together to eliminate food waste. 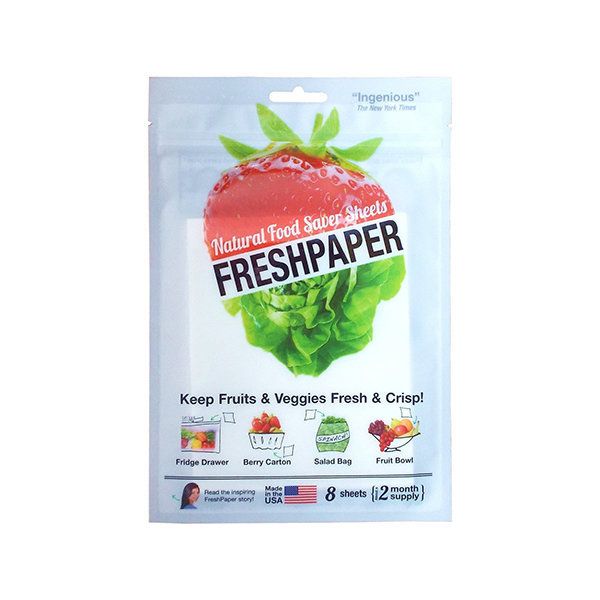 1 / 9
Fresh Paper
These sheets, made from edible organic spices, promise to keep your produce fresh for up to two to four times longer than normal. You can use the sheets to line your crisper drawer, to place in your box of mixed greens or under your berries. They are compostable, recyclable and biodegradable.<br><strong><br>Get <a href="https://www.amazon.com/Fenugreen-FreshPaper-Produce-Saver-Sheets/dp/B00VEFVR8O/ref=pd_rhf_se_s_cp_2?amp=&dpID=51tjtSHhLVL&dpSrc=sims&ie=UTF8&preST=_SL500_SR92%2C135_&psc=1&refRID=FJK7CDK5HT5DFY7G8TZ5&tag=thehuffingtop-20" target="_blank">Fresh Paper for $9.99</a></strong>
Amazon