University of Georgia freshman Chelsea Chaney says she did not give her former high school permission to use a photo of her in a two-piece swimsuit, so now she's suing for $2 million, WSB-TV reports.

Chaney claims in a lawsuit filed April 29, 2013, against the Fayette County Public School District in Georgia that school officials improperly used an image they ripped from her Facebook page during an October 2011 district seminar about Internet safety.

The photo used in a PowerPoint presentation shows a then-17-year-old Chaney in a bikini standing next to a cardboard cutout of hip-hop artist Snoop Lion (who was then known as Snoop Dogg). The photo appeared in a slide with Chaney's full name and the tag "Once It's There - lt's There To Stay," according to the complaint. The Chaney slide was shown immediately after a slide in which a cartoon daughter confronts her mother over the mom's old Facebook page that lists the mother's hobbies as "bad boys, jello shooters, and body art," according to court papers.

By using Chaney's photo in this way, the lawsuit contends, the school district publicly branded the teenager as a "sexually-promiscuous abuser of alcohol (or, in today’s vernacular, an alcoholic slut) who should be more careful about her Internet postings."

A printout of the slideshow was offered to every student and parent in attendance at the seminar.

Curtis R. Cearley, director of technology for the Fayette County Schools, presented and planned the seminar, the court complaint said, and was responsible for choosing the photo of Chaney. A letter that Chaney received from the school said the photo was picked at random, WSB-TV reports. Cearley did not return a request for comment from The Huffington Post.

Chaney told WSB-TV that she cried a lot over the incident and felt bullied by the school district.

"I was embarrassed. I was horrified," Chaney said. "It never crossed my mind that this would ever, ever happen to me."

There would not be a need for legal action if the school had agreed to hold an assembly on "respecting the rights of others on the Internet," Pete Wellborn III, Chaney's lawyer, told HuffPost. "Moreover, had the school district not completely ignored my written request for a conference prior to filing suit, suit may well have been avoided," he said.

Melinda Berry-Dreisbach, a spokeswoman for the school district, said, "Because this is pending litigation, the school system cannot comment at this time."

While expressing little sympathy with the lawsuit itself, Chris Matyszczyk, a CNET blogger, noted that the photo was allegedly taken on a family vacation and that Chaney appears to be completely sober in the picture. So Matyszczyk wondered why Cearley "chose the image to allegedly scare parents and others into talking to their wayward children about their public displays of, um, wantonness."

"This seems like a perfectly innocuous image of a perfectly pleasant human being, experiencing something that might be described as 'fun,'" Matyszczyk wrote.

Medha Chandorkar at PolicyMic also called into question the viability of the lawsuit, but labeled the use of Chaney's photo "slut-shaming of the worst kind."

See the slide that featured Chaney's photo and her full name: 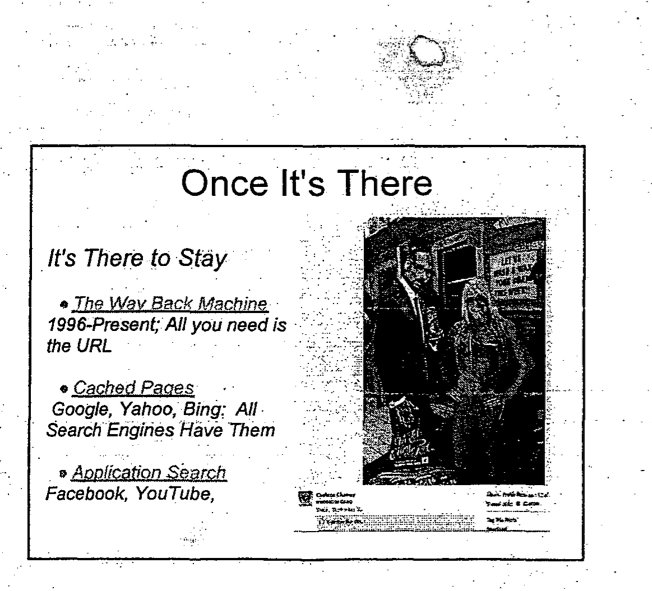