Chelsea, Chelsea, Chelsea. I know your guest list is whittled to only 400 or so lucky souls. I know that you aren't inviting many donors and celebs to your wedding. Not even Barack Obama.

But, I mean, we lived a few minutes away from each other, off Bedford Road! I hung with you when you came to Chappaqua, like a favorite aunt. You confided in me when no one else was talking to you.

Ok, it was only one time, for 10 minutes, about 10 years ago when your family was moving in.

But our connection goes back before that, and you may not know it. Let me explain, if you can take a minute from wedding plans, and see if this may change your mind:

For his second (sincere) apology about Monica Lewinsky, your dad, President Clinton, quoted from the prayerbook my husband Chaim Stern wrote. The media descended on our house. Networks called. The New York Times wrote a profile of Chaim. Your dad sent us a copy of his speech and a gracious note. So that's our first connection.

A year or so later when your parents bought their Dutch Colonial in Chappaqua, Chaim and I were invited to a small "welcome to the neighborhood" potluck dinner party in their honor. The hostess said that Hillary had asked we be included. We were surprised by your mom's thoughtfulness and by her savvy in remembering that we lived there.

We arrived with a bowl of hot artichoke dip on a cold January night, right before your dad's next-to-the-last State of the Union address. We were warned this was to be a relaxing, neighborly event, and to dress down and act casual. No reporters would be there, no beltway bloviators. Most of the few guests were skeptical Republican neighbors.

Your parents arrived with a small meat casserole and some big Secret Service guys. And you too, Chelsea. You, the first daughter, had blossomed from a curly-haired teen with braces into an attractive young woman.

You confided to us that you were really excited that for the first time you would have your own room, in your own house. (The White House was, after all, a short-term rental.)

Neighbors were swarming around the president and first lady, and you were standing by yourself, smiling that pretty smile. So we talked of politics, your dad, your mom. It was obvious how much you loved them, and how proud you were.

Your dad, nicely filling a sky-blue sweater, worked the room, dispensing charm and soaking up basic info: "Where's the best deli? Where should I walk Buddy?" (Poor Buddy was soon to be killed by a car on the road we suggested. I'm really sorry. In fact, maybe that's why I was overlooked as a wedding guest!)

The chat Chaim and I had with the president focused on things local, and we all went along with it as naturally as possible, considering we were chatting about septic tanks with the most powerful man in the world.

And then there was your mom. Would she be the cold witch portrayed in the media or the warm woman people who had met her raved about? Turned out she laughed that big laugh, and seemed to listen when we talked, and even the skeptics and die-hard Republicans found her appealing.

Nobody wanted to be uncool and ask for a photo-op, but when one neighbor slyly brought out a camera and asked for a photo, the rest of our cameras came out, like mushrooms after a rainstorm.

Chaim had brought a disposable, and I posed with the president, with his arm around me. And we smiled and stood there ... and stood there, for what seemed like a full minute, and for some reason Chaim couldn't get the camera to work and frankly I didn't think it was that weird to have Bill Clinton close to me. He was known for just that!

Finally the President of the United States of America took his hand from my shoulder and said, "Rabbi, can I help you with that?" And he walked over to Chaim and moved the lever on the camera, walked back and put his arm right back where it had been. 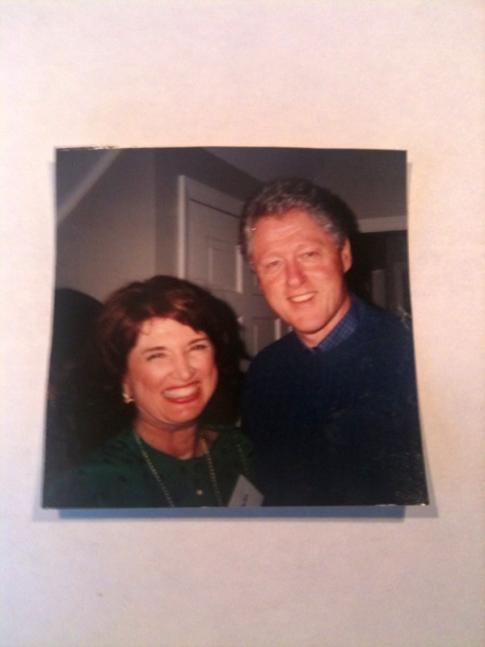 Our connection with your family wasn't entirely over. A bit later, your mom invited us to attend her announcement to run for the Senate -- and you were by her side -- but we were traveling. In fact, maybe you guys figured I wouldn't be around, and that's why I'm not invited.

I did meet your mom again at a political event, and she remembered me, by name. And I asked about you. And she beamed.

The next September, since they lived a few blocks away from the temple, Chaim invited your folks to the High Holy Days services, and though they couldn't come, Hillary wrote a personal note. The next year, when Bill was retired to country squire and Hill was a Senator, both did show up, he in a skullcap, surprising the late-service congregants and staying to schmooze.

The Clinton effect lingered just a bit more. Due to the connection with Bill's apology, when my husband died, "Monica Lewinsky" appeared in the first paragraph of his Times obituary. (Maybe that's why I'm not invited.)

Chelsea, you were a lovely young woman when I talked with you, and seem even lovelier now. Can't you find a space somewhere for me, just for old times sake? I'll stand if necessary, and leave before dinner. And you don't have to invite my new husband. Just sayin'.

In any case, have a wonderful wedding. And don't be afraid to friend me on facebook.

author, Travel Tales I Couldn't Put in the Guidebooks