Over forty people lined up at 10pm on Monday evening to get a seat in Kauai's small council chambers the following day at 8:30am. They stood, laid and danced in line, through dark tropical downpours, for over 10 hours just to witness one of many ongoing council meetings. This has become the state of our lives over the past months. Public hearings lasting past 1am, historical mobilizations of thousands taking to the streets, nights where sleep has been replaced by research, writing and sign-making.

Little Kauai's struggle against the largest chemical-seed corporations in the world is inspiring much attention. Nearly every corn seed in the industrial food system touches Hawaii somewhere; the most isolated islands in the world have become a main hub of research and development for the multinational companies that dominate the agricultural input market. Six corporations control 70 percent of the global pesticide (including herbicide and insecticide) market and essentially the entire market for genetically modified seeds. Four of them -- Pioneer DuPont, Dow, Syngenta and BASF -- occupy 15,000 acres on Kauai. Kauai has a population of 64,000 mostly working-class residents. A true David versus Goliath story that is just beginning to fully unfold. 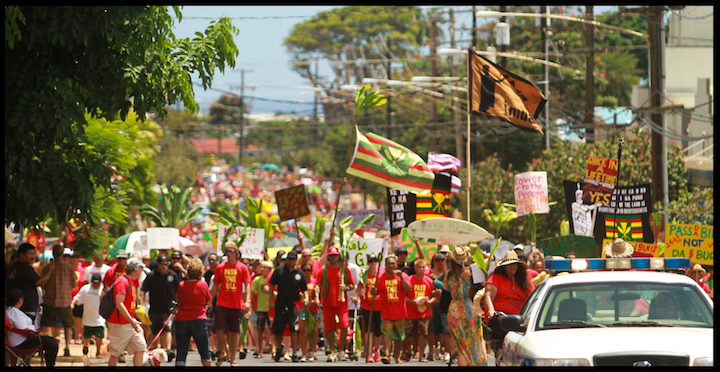 Some recent media commentators have asked "why now?" about Hawaii's growing movement against the agrochemical-GMO industry, suggesting the influence of a relatively paltry sum of non-local funding, a few friendly politicians, and Facebook. All things that perhaps have been tools in the movement, but surely not an explanation for its presence, popular resonance and firm determination.

To understand the "why" of our local struggle, it firstly needs to be situated in a larger global movement that is responding to a radically unjust, anti-democratic and ecologically destructive food and agricultural system. On Kauai, the movement is partly about the local manifestations of that food system -- the poisoning of land and people for the development of new technologies that the world does not want, and does not need. It is a response to resident grievances over breathing in pesticide-laden dust on a daily basis for the past 15 years; parent and teacher anger after dozens of students were poisoned a second and third time; local physician concerns that they are noticing higher rates of illnesses and rare birth defects; the frustration of Native Hawaiian taro farmers watching rivers go dry as chemical companies divert and dump water; beekeeper fears that they will be next to loose organic certification due to pesticide contamination, or experience hive die-off from the known bee-killers.

Some of the same commentators have mistakenly labeled our struggle an "anti-GMO" movement, reducing our activism to mere opposition to a technology. More accurately, on Kauai we are responding to the specific impacts of the agrochemical-GMO industry on our island -- clearly an issue of environmental justice. Within the global movement that we are a part of, there are people who do not believe we should be influencing life at the fundamental level that GMO technology does. There are also a lot of people in the movement who are not strictly opposed to the science of genetic engineering itself. In regards to GMOs, what is being opposed is the direction and control of that science, and the resulting social and ecological devastation of how it is being used.

We are beginning to expose what happens at "Ground Zero" of the chemical-GMO industry's R&D operations. Kauai may soon pass a bill that would give us the right to know what pesticides are being used in massive amounts right up next to schools, hospitals and residences. Kauai County Bill 2491 would also establish buffer-zones around these sensitive areas, mandate a health and environmental impact study, and if passed in its full form, put a temporary halt on expansion of the industry.

As Kauai's pesticide "Right to Know" bill moves forward, the chemical companies are revealing just how afraid they are of us gaining even the most basic information about their operations. Arrows to derail, distract, depress and divide us are being shot from every direction, and from some of the deepest pockets on the planet. Above all, the chem-seed corporations are attempting to exterminate our belief that we are capable of making change. They tell us that justice is illegal, that we must choose between jobs and health, that we will be inept at regulating them (wouldn't they like to think!), that we can't possibly feed ourselves from our best agricultural lands, and that without them the world will go hungry. They try to push us to retreat back to our individual lives, convinced that collective action for social change has become impossible, and that there simply is no alternative to the food system they are designing.

Too often we concede our imaginations to the status quo; the dominant logics of the day train us to do so. We talk as if all the deals have already been made. We say we tried in the 60's, but nothing ever changes. We decide that the best we can do is buy organic or fair-trade, crossing our fingers that our "dollar vote" will transform the entire food system. We attempt to just "opt-out" of the system, hoping that the billions of others will somehow find their way "out" too (even though we know ours is rife with contradictions). We sing "don't worry, just be happy," and pop a Prozac.

But what is happening on Kauai is inspiring the eyes of the world and terrifying the chemical companies because we have not, and will not, surrender our belief in the possibility of big, meaningful social change. When they tell us that "there is no alternative" to their malignant existence, we are calling their bluff.

We are on the verge of forcing insidiously powerful corporations to disclose what kinds of toxic experiments they are conducting on our land and people. And this is just the very tip of what is happening on Kauai, and what is increasingly happening around the world. As we build new solidarities, connect the dots of destruction in our food system, and situate these in the broader economic-political context, we are having new conversations and thinking in ways that push the boundaries of what is considered possible. We are beginning to talk seriously about our fundamental human rights to clean air, water and soil; about the colonial legacy of concentrated land ownership; about the privatization of the resources needed to grow food; about the injustices of an economic system where competitive profit accumulation is the only defining logic; and about the possibility of new ways, often based in old knowledge and wisdom.

Though the chemical companies may be devastating our lands and waters, they have not devastated our imaginations. Whether or not we pass a bill, we are growing the momentum, intelligence and creativity of a movement that will continue to take bigger and bolder steps. The food movement, locally and globally, is rising, and it isn't going away. And we will win, because the world we are fighting for is what the vast majority of people want, and we are simply reminding people how to believe that it is in fact possible to make that world.