The chemistry of the ocean has a story to tell and with each sample of seawater we reveal new pieces of information - where the water has been, how old it is, what it has gained from the atmosphere or coast, what it has lost. Nutrients and trace elements give clues to how much life the water can support. Particles slowly sinking to the bottom are a mixture of microscopic organisms both dead and alive, a conglomeration of materials from land and ocean.

Particles filtered from seawater pictured under a microscope. Both images are the same sample: on the left fragments and whole cells of marine phytoplankton are pictured, on the right with no light only living cells containing chlorophyll glow. Image from Sara Rauschenberg, Bigelow Laboratory. For more on particles check out SeaPeteRun.tumblr.com.
The Arctic Ocean is the smallest ocean basin in the world with remarkably complex features. Water in the Arctic is a mixture of seawater from the Atlantic and Pacific Oceans, and freshwater from major rivers that drain into the basin. Warm, salty water from the North Atlantic flows into the Arctic near Greenland, and cold, lower salinity water flows in from the Pacific through the Bering Strait between Alaska and Russia.

The Arctic water column is stratified - salty water from the Atlantic does not mix evenly with Pacific water or freshwater from rivers and instead settles in different density layers. The surface layer has the lowest salinity from mixing with river water and melting ice. As the surface layer freezes into sea ice, salt is ejected into a deeper layer called the halocline. The halocline is mostly Pacific water near the Bering Strait (where we are sampling) all the way to the North Pole. In the eastern Arctic near Greenland the halocline is mostly Atlantic water. The deepest layers across the entire Arctic Ocean are made of mostly dense, salty Atlantic source water.

Major rivers flow into the Arctic Ocean from Alaska, Canada, and Russia and form large continental shelves that amount to 30% of the basin's surface area. Continental shelves are extensions of land underlying up to 200 meters of seawater that form when rivers flowing into the ocean deposit sediment. We have spent the last week sampling water overlying the Alaskan and Chukchi shelves; sediments can be a source or sink of different trace elements and this signature can be carried out to sea with currents. 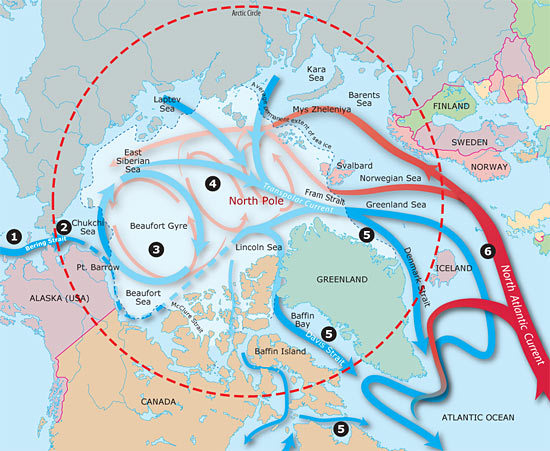 Water from the Pacific and Atlantic Oceans flows into the Arctic basin. Image from Woods Hole Oceanographic Institute. Check out this link for the interactive map.