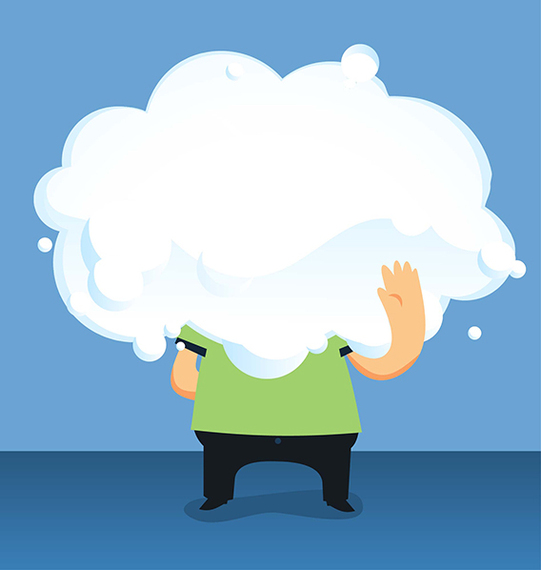 It was finally time to celebrate. I had just received an honorary certificate for completing a long course of chemotherapy. This was the last big hurdle in my cancer treatment. I had already been through surgery and radiation to treat an aggressive form of colorectal carcinoma.

I sat down to write thank-you notes to friends and family who'd supported me during my struggle. It was then that I realized something new was seriously wrong. I forgot how to write basic letters.

I was starting on the notes and couldn't remember how to make a cursive S and a J. I had to use a handwriting page from the Internet to figure out how to make those and other letters correctly.

I didn't understand what was happening. I spoke to my mother, who'd been my caregiver during my battle with cancer, and she had even more bad news. She told me it wasn't just the alphabet I was forgetting.

She told me I'd been telling the same stories over and over again. I'd tell a story and then 15 minutes later I'd tell it again. I would also use words incorrectly in a sentence and not even realize it.

It turns out many of my friends had also noticed that my brain seemed muddled. No one wanted to tell me because I'd already been through so much and didn't want to add to my worries. I was devastated. Before my cancer diagnosis, I'd been a high-energy, social person working once as a restaurant manager and then as an IT supervisor. Both of these jobs required a high level of multitasking and now remembering toothpaste was difficult.

Now I didn't want to leave the house, I didn't want to socialize because I had no idea what I would say or whose name I may forget. I had to let my parents take over my banking for fear of making mistakes. I just couldn't trust myself with important tasks anymore.

I shared my concerns with my radiation oncologist and he immediately scheduled me for a MRI to make sure the cancer had not spread to the brain. He didn't think it had after such an aggressive treatment but he wanted to be sure since the symptoms I described are also experienced by patients with brain cancer. Luckily he was able to get me scanned the very next day so I only had to endure one sleepless night. Thankfully the scans came back negative and he explained that my body had been through a lot over the past year and things would recover in time.

Soon after that I went in for one of my normal check ups and ended up speaking with a nurse on the radiation team and she recognized my symptoms. She told me I had what's known as cancer-related cognitive impairment or "chemobrain." Estimates vary but studies suggest a significant number of cancer patients who've undergone chemo may experience some degree of cognitive impairment. Until recently, however, many doctors tended to dismiss the memory loss off as a given side effect of treatment. Their advice was for patients to wait it out and hope the problems diminished over time. It was then that the nurse said she believed the hospital I was receiving treatments at had started a fairly new program to help with the effects of chemo brain and pointed me in the direction of Cancer Rehabilitation Center.

Matt LeBlanc, the nurse navigator for Anne Arundel Medical Center's Cancer Rehabilitation program, in Annapolis, Maryland, tells me there is a real knowledge gap. He says chemo brain exists but it is under-recognized and under-treated.

A little over a year ago, Anne Arundel Medical Center decided to address the need directly by launching a cancer rehab program. Among other things, it offers cognitive therapy to cancer patients using techniques developed for those who've suffer traumatic brain injuries. Rebecca Gondak is a speech language pathologist at the center. She told me that many of her cancer patients arrive with significant cognitive impairments including short-term recall and language retrieval.

She assured me that intelligence is not affected, the problem is a patient's ability to access the intelligence. Rebecca also explained that with help, even brains damaged by chemotherapy can form new pathways to compensate for what's been lost.

Apparently, I am a perfect example of chemo brain. When I arrived at AAMC's Cancer Rehab Center, I tested far below average for memory and word recall. I began a vigorous course of treatment using a combination of exercises, strategies and tricks to teach the brain new ways to access information.

Rebecca, my speech therapist, says that since people with chemo brain often have trouble with short term memory she teaches them how to connect new information to something they are already familiar with.

Here is an example of an effective strategies for recall Rebecca shared:

"Let's say patient parks on level 3A. How will they remember if they're having short-term memory loss? Well, I'll have them think of connections to the level. Maybe they have 3 children and want an A in school. That's 3A."

Rebecca also uses repetition and problem-solving exercises to help jump start the brain. There are many more exercises we used and I was noticing a positive change just after the first couple months.

After twelve sessions, I was thrilled with my progress. I jumped from the 13th percentile in cognitive function to the 79th percentile. Other patients have seen similar results after going through the program.

Rebecca says one of the things she finds most moving is that many of her patients are making huge leaps in memory skills even as they endure cancer treatment. She says that she gets a lot of patients in pain or who aren't sleeping and she still sees improvement.

Cancer rehab has given me my life back. I am no longer afraid to speak with others or give a speech to a room full of people. I still use many of the things I learned from speech therapy and they help me in some way almost every single day.

The bottom line is the skills I've acquired in rehab have allowed me to function again. It has made a tremendous difference in my life. I will still have some issues from time to time but far better off than I was prior to to the program. I am happy to say I am now cancer free and my goal is to reach out to other cancer patients who may be experiencing some of the same issues I was. I can now let them know help is available and they are not alone.