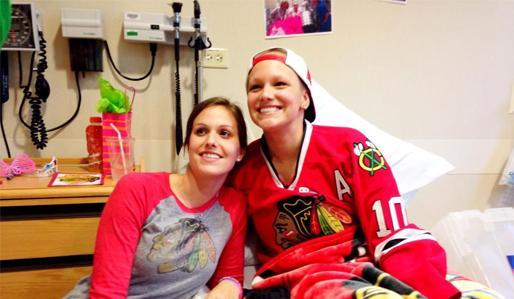 When you first start treatment, it's kind of fun. Well, maybe fun is the wrong word. It's... new? The days of chemo are long, but they move a little more quickly at first because there is so much to learn and experience. However, your freshman naivety is quickly overpowered by heavy fatigue, nausea, and other terrible side effects. I felt this shift about a month after chemo, and each week it only got worse.

Two months into chemo, I crashed and burned.

For every appointment, I always brought my entourage -- parents, neighbors, friends, cousins, co-workers -- to keep the visit as fun as it could be. But I quickly began getting tired of these gatherings and ran out of ways to entertain the people in my party. It wasn't expected of me, but I felt that keeping hospital times light and fun made life easier and less scary for my caregivers.

Then, I reached my breaking point. I began crying all the time without reason. I became exhausted beyond belief. One day, I said what I had been thinking for a long time aloud. "I want to stop treatment. I give up."

Even though only one person heard it, it was out there in the universe. I officially called it quits.

I never had the courage to share these feelings with my family and other friends, in fear of scaring them and letting them down, but I could vocalize them to my doctor during the rare moment I had alone with her. No one was surprised; they had been watching me deteriorate before their eyes for some time now. The only plan we could come up with was to try an antidepressant and see if it helped.

I spent the next two weeks isolating myself. Everything I did was simply going through the motions of each day. I spent hours racking my brain for a reason to stay alive and could never name anything about myself that I wanted to live for. My reason for showing up to the next treatment was only because of my friends and family, but it weighed on me that I wasn't showing up for myself anymore. Then, suddenly, on a day that I normally would have spent in bed crying, I felt an overwhelming urge to shop. Yes, to shop. I didn't have any tears left, and that's when I knew Cymbalta had started working. That's when I started working too.

My approach had been to celebrate the cancer journey from day one. Everything was a party. Appointments were parties, head shaving was a party, and we had a huge party when I finished round one of chemo. But this effort died when I wished I had. And when I stopped celebrating, everything became so much harder. My doctors gave me medicine that helped me clear my head enough to be able to form this thought, "I either change chemo or I stop chemo."
Kayla -- that's me -- was back in charge.

I already had the ingredients for a great party during treatment. All of my friends and family gathered and we often brought music and food. I took these weekly parties to the next level when I proposed an idea: that we "theme" each treatment by dressing up. Everyone loved the idea and happily brainstormed ideas. With a push from my father, "superheroes" officially became the theme for the next chemo appointment. "If you're coming, you're dressing up," he said.

During the darkest point in my life, "themo" was born.

I could be the first cancer patient in history who wished they had more treatments or at least had them more frequently. A week between themos was too long. We had a blast dressing up and creating a buzz in the hospital and community with our costumes. Themo quickly went from five friends and family dressed as superheroes to more than a thousand people dressed in Chicago Blackhawks-themed gear for my final treatment. It was amazing to see the community that formed around themo. My entire school where I taught 5th grade participated, many folks at the hospital and friends and family from all over the world dressed up to show their support.

Themo and everyone involved in it was the difference between life and death for me.

So I'm writing this not to tell you to put together your favorite costume and ask your friends to do the same, but to try your own themo. Celebrate every moment you get through. Themo can mean different things to different patients. Whether it's a dance party before surgery, flowers on Fridays, or flashy new earrings, find your own way to celebrate you. The journey you're on is truly terrifying, and it will push you to a point that most will never know. But I'm here to tell you, you can do it because that's the only way. And I know that you can make it through this long haul.

Did you go to chemo today? Put on the fuzzy socks you love and paint your nails. Did you or a loved one finish radiation? Gather your family for a meal. Make it through a rough day? Have a snuggly night. Whatever you do, do it with the intention to honor yourself.

Dream up your own themo. You deserve it.