Attorney Stephen O'Rourke, representing the US Department of Justice (DOJ) called it "cherry picking," when asserting that BP has relied upon isolated data to suggest a minimal amount of oil escaped during the 2010 deep water drilling disaster in the Gulf of Mexico.

As the second phase of the BP trial wraps up another week, a scientific battle is waging over how much crude actually spilled into the gulf during the 87 day gusher. The determination of these findings by the court will define exactly how much the oil giant owes in Clean Water Act fines, which can range from $1,100 to $4,300 per barrel.

Attorneys for BP say their scientists estimate 2.45 million barrels spilled out of their broken well-head, while the DOJ, relying on a combination of four experts, estimates 4.2 million barrels of crude spewed into the warm Gulf waters during and after the deadly blowout. That's a whopping discrepancy of roughly 1.7 million barrels, or as much as $7.31 billion.

As O'Rourke alluded, BP does not exactly have a reputation for coming clean on the facts surrounding the disaster. Early on, the oil giant told the public that the leak was an estimated 5,000 barrels per day, yet according the company's own internal emails BP knew that up to 100,000 barrels per day were flowing unchecked into the Gulf of Mexico ecosystem. 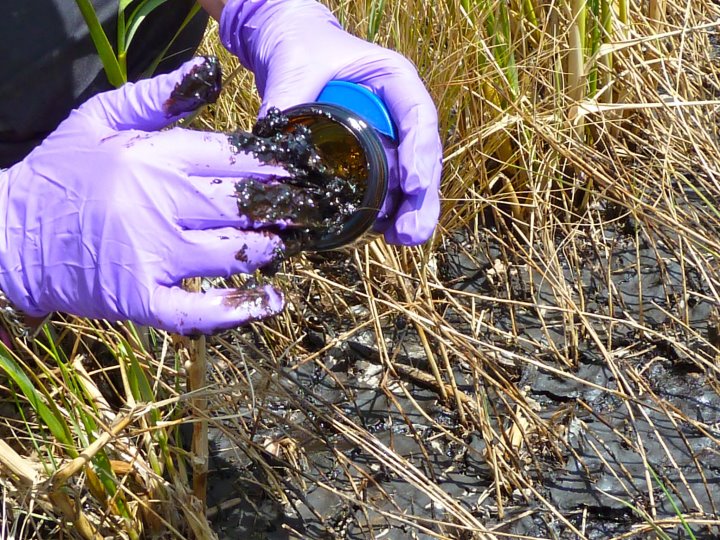 BP has consistently used their "science" to low-ball the amount of the spill and minimize its impacts on Gulf Coast residents and ecosystems.

Additionally, contracted clean-up workers who continue to struggle daily with serious health concerns brought on by their exposure to BP's toxic crude and the oil dispersant Corexit, have often hit a wall of BP's "independent" data.

For more than three years they, along with many coastal residents sickened by the disaster, have desperately sought the independent, unbiased science that could answer their questions regarding what they were exposed to and to provide for effective treatment. In response to their pleas, BP contracted highly paid public relations firms touting industry-friendly scientists to cloud the truth.

In September of 2011, ChemRisk, the for-profit scientific consulting firm now part of Cardno Chemrisk, released an "independent" study concluding that off-shore workers who cleaned up BP's oil between April and October 2010 were not exposed to harmful levels of certain airborne chemical compounds. These volatile organic compounds, which included cancer causing benzene, toluene, ethylbenzene or xylene, are collectively referred to as BTEX.

The study, published in the July 28, 2011 issue of Environmental Science and Technology, was announced on September 2 with a carefully worded press release misleadingly titled, Study by Leading Scientific Consulting Firm Finds No Evidence of Health Dangers for Gulf Coast Cleanup Workers.

Yet, according to Dr. Wilma Subra, a prominent gulf coast chemist and 1999 MacArthur "Genius Award" Fellow, ChemRisk's analysis of exposure levels is most notable for what it does not include.

"They took a very narrow look at the data," she explains. "If they had broadened their look, it's very likely they would have found that semi-volatiles were present in the air."

Semi-volatile organic compounds (SVOCs), which were not analyzed in this study, are very different from BTEX chemicals, as they include polyaromatic hydrocarbons (PAHs), and a host of other chemicals that are also present in crude oil.

Subra suspects SVOCs and PAHs are responsible for many of the significant health effects experienced by gulf coast residents and clean-up workers.

Equally concerning in this study is the murky use of the term "independent." Although previously published media reports clearly state that ChemRisk was not paid by BP, the samples for the study were collected and provided by BP, leaving Subra to question just how "independent" the findings can be.

"This is a typical thing they put out on behalf of industry," she states.

As it turns out, ChemRisk has a long, and on at least one occasion fraudulent, history of defending big polluters, using questionable ethics to help their clients avoid legal responsibility for their actions.

One well-known example is the case that became the basis for the movie Erin Brockovich, where the polluter and defendant Pacific Gas and Electric (PG & E) was found to have paid ChemRisk to discredit research done by Chinese scientist Dr. Jian Dong Zhang.

In an earlier study, Zhang had found strong links between chromium-6, which was found in Hinkley, California's drinking water, and cancer. ChemRisk obtained Dr. Zhang's data, and without his knowledge, intentionally manipulated the findings to contradict his own earlier studies.

The erroneous data was then submitted to the Journal of Occupational and Environmental Medicine (JOEM) as though it had been re-worked by Dr. Zhang personally.

Led to believe it was legitimate, the JOEM initially published the findings, but was later forced to issue a retraction, because at the time of submission no disclosure was made regarding ChemRisk's contribution of intellectual work and finances to the study, (click here for more information on what is now known about the very harmful effects of chromium-6.)

While conducting research for this article, we contacted ChemRisk for an interview with one of the authors of the study on clean-up workers' health after the BP disaster. The interview was allowed to proceed only in the presence of another individual who was presented as an additional Chemrisk scientist.

The individual, who identified himself as "Dick Keil, with Chemrisk," steered the conversation, including the introducing of the Chemrisk scientist, followed by a refusal to allow the discussion to be recorded.

During the interview, it became clear that Keil was keeping a tight reign on both our line of interview questions, as well as the scientist's responses.

Problem: Dick Keil is not a scientist.

As our research has uncovered, Dick (Richard) Keil is a former Bloomberg writer who was a member of the traveling White House press pool during George W. Bush's presidency. He has also worked with the office of Former US Deputy Undersecretary of Defense Paul Brinkley, who until last year headed the US Defense Department's Task Force for Business Stability Operations in Afghanistan.

Additionally, and at the time of the interview, Keil was employed by Purple Strategies, a Washington DC based public relations firm hired by BP in June of 2010

Keil, an experienced and extraordinarily well-connected media veteran, was paid by Purple Strategies on behalf of BP to ensure that the only information reported to the public was that which would minimize BP's financial responsibility.

Further research linked Purple Strategies to the distribution of the press release announcing the results of the "independent" study.

Although Dick Keil has since moved on to a position as Senior Media Relations Advisor with Exxon Mobil in Dallas, "science" and "truth-for-hire" public relations firms have continued to work non-stop to maneuver BP into the best possible light and legal position in order to protect it's bottom line.

Meanwhile, and while the BP trial continues in New Orleans, Gulf Coast residents are left wondering if BP will ever be held responsible for the damage done to their fisheries, ecosystems and livelihoods, wait to see if their bodies will ever recover from an assault of BP's oil and dispersants, and wonder if anyone will ever - in the words of Purple Strategies' spin writers, found in the mouth of former BP President Tony Hayward - "make it right."

Karen Savage contributed to this article.

Gulf Coast based author and journalist