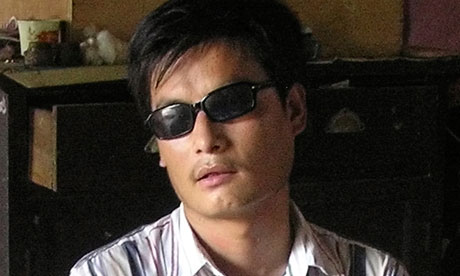 It reads like a scene straight out of an action movie.

This week, under cover of night, a blind political activist slipped past dozens of watchful guards, crossed several barricades, and climbed a wall to escape the confines of his own home. A network of underground volunteers helped guide him to Beijing, where he is reportedly seeking protection from the U.S. Embassy.

Chen Guangcheng's story resonates deeply with me because I once similarly evaded capture by journeying across China in darkness alongside underground activists. When the authorities listed me among the "21 Most Wanted" after crushing the Tiananmen Square movement in 1989, I knew I was running for my life. They desperately wanted to silence me.

So why is China now trying to silence Chen Guangcheng? Because Chen, though blind, saw all too clearly that China is inflicting injustices upon its people -- and upon women in particular.

Chen angered officials most noticeably when he condemned their brutal enforcement of the One-Child Policy. He bravely filed a class-action lawsuit on behalf of women who were subjected to sterilizations and forced abortions under the policy, and officials responded in 2006 by jailing him for nearly four years. They have kept him under house arrest ever since his release.

Last year, authorities spent four hours brutalizing Chen and his wife in front of the couple's daughter Yesi, who is just six years old. Chen barely survived the attack and his health began deteriorating. In the fall, several groups (including All Girls Allowed) sent volunteers to see if they could meet with him. When our volunteers encountered the guards, they were robbed, beaten and sent away.

For months we heard nothing from Chen and at times wondered whether he was still alive. In November I testified before Congress about Chen's plight, hoping that the U.S. would take action before it was too late.

Now, Chen's story is finally out in the open. China can no longer silence his criticism of oppression and the One-Child Policy. (In fact, the government's extralegal attempts to quiet Chen have now given him a larger voice than ever before.) And if Chen is indeed at the U.S. Embassy -- as reports currently suggest -- then the U.S. can no longer ignore its responsibility to act in the face of injustice.

With the eyes of the world watching, China must allow Chen and his family to live in freedom. Critically, the nation must also heed widespread calls to repeal the One-Child Policy, whose victims are largely voiceless. They are young mothers, like Ma Jihong -- who died last year after officials chased her, pulled her into a van, and forcibly aborted her "out-of-plan" pregnancy. They are the millions of infant girls who have disappeared in China's ongoing gendercide.

My prayers are with these women, and with Chen Guangcheng and his family. I, too, glimpsed freedom when I escaped from the grasp of the Chinese government two decades ago. And more recently I found full freedom in the name of one who -- like Chen -- suffered beatings, threats and imprisonment for his challenging words: Jesus of Nazareth.

It is my hope that Jesus' calling to "proclaim liberty to the oppressed, and set the captives free" will soon be realized throughout China. Chen's story may only be the beginning.

Chai Ling is the founder of All Girls Allowed and the author of A Heart for Freedom. A key student leader in the 1989 Tiananmen Square movement, Chai Ling was twice nominated for the Nobel Peace Prize.