On June 3, Cherie Alvis posted pictures to Facebook of her infant son -- a baby she'd placed for adoption 22 years ago. The mother from Lufkin, Tex., also included a picture of herself holding a sign that read "I am looking for my son. He was born June 3, 1991. He's 22 today. Birth name Joseph Edward Saenz."

On Saturday, they reunited for the first time. 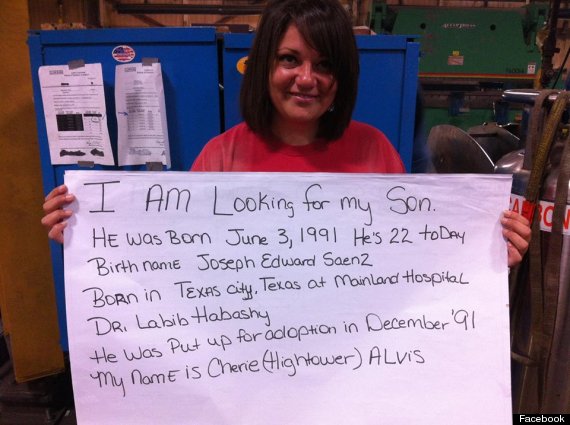 Alvis, who was 17 when she placed her son for adoption, told the station that a complete stranger, Sherry Riley, was the reason behind their reunion.

She looked up state records using the birthdate provided by Alvis and finally found Alldridge on Facebook. She then directed him to his mother's page.

The 22-year-old said he'd always known he was adopted and that he understood why Alvis did what she did.

"She basically had to have another family keep me alive and I'm proud of her for that," he told KTRE. "I feel like everybody has to make hard choices at one point and some are harder than others."

On Sunday, Alvis posted more pictures to Facebook of the family reunion.

"Our family is complete," she wrote under one photograph of her and Alldrige. "I am so glad he's home. I can't stop staring at him."

Check out the images of their reunion below.