The Huffington Post is coming to Germany and I'll be helping it get started.

It's definitely going to be exciting. I believe as we begin to follow in the footsteps of the American media, the new realities of the Internet are being realized to an ever-greater extent. Finance Minister Schäuble even told BILD recently that the invention of the Internet had a greater effect on Germany than German reunification.

The changes began slowly and almost imperceptibly in the 90s, when the invention of the "browser" suddenly allowed anyone to access the Internet at home. Old business models changed just as much as modes of communication did. Many traditional activities lost their value. Word quickly got around that the music industry was the first to be seriously impacted. We in the media were also caught off-guard. It might even be the most comprehensive change in our field since the invention of the Morse telegraph made a form of simultaneity possible in spite of great distances. At the time, many found the increased tempo understandably difficult to handle -- today it is no different.

"A publically-known news host? Change? You've got it pretty good." I heard that kind of thing a lot. Over time, three experiences helped me "go digital":

An invitation to a political conference took me to Washington. I was supposed to give a speech there. As I entered the giant hall, it was fairly full and there were still four speakers ahead of me. Ever since I spent time as a DAAD (German Academic Exchange Service) exchange student in Los Angeles, I've realized that at every politically correct event in the U.S. there are always two black people. So I started to look for the other one. When I found him, I asked him who he was and what he did. He smiled widely and said that he was a U.S. Senator and planned to be president soon. I smiled back; "Yeah, sure!" and tapped the back of my hand. "Watch me," he responded. I spoke to this very friendly gentleman for a while about European politics and about Germany. He was astoundingly familiar with both topics. Back in Germany, I watched as that same Mr. Obama brought to fruition what still seems to me an audacious plan by using new technologies to first win over public opinion and then outwit the political establishment. 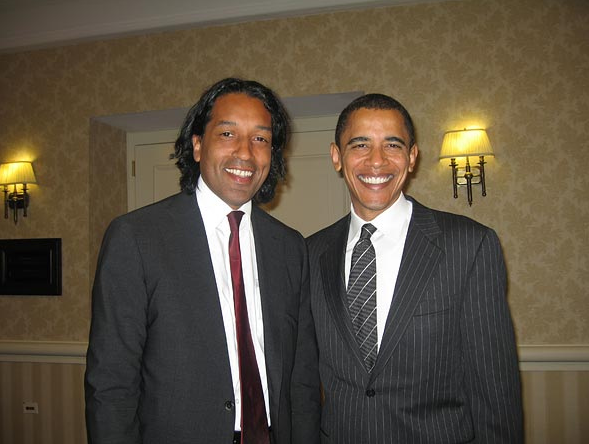 Then the second experience: At a DLD Conference (Digital-Life-Design) in Munich, I got to know an American woman with an accent I couldn't quite pinpoint. Her approach to media and journalism, which she had just detailed in a lecture, was fascinatingly logical, but nobody had put it together so meaningfully before. Media are like cars, and it's been a long time since they ran exclusively on diesel motors. She explained that on her platform, journalists would share space with anyone who could formulate a thought, "in extreme cases" publishing "a head of state next to a homeless person." Another key idea behind her work: "Who has time to trawl the Internet for every possible source?" She would find the most important and funniest stories on the Net, explain why they deserved further attention, and link to them. A persistent thought remained: Maybe not being a trained journalist was the best way to keep an open mind for a radical new approach, much like this Cambridge-trained economist of Greek origin, Arianna Huffington.

Putting together or even curating various sources is nothing new. Articles frequently cite each other, and aren't the majority of political sources effectively curated? Haven't we always quoted and summarized what we've read? Isn't The Huffington Post really doing something very straightforward by just adding links?

At the time, I couldn't imagine that a new brand would find success in the overcrowded media market just by bundling familiar content, offering many people a platform, and adding a few things of its own. I watched from a distance as the idea grew, and saw how loudly Comscore proclaimed the success of The Huffington Post over the well-respected New York Times.

And then there's Y-Titty. At the German Web Video Awards (Deutschen Web Video Preis), I had the opportunity to present the Jury Prize to Y-Titty. The name might be unfamiliar to many, despite their extensive coverage in the entertainment pages of the Frankfurter Allgemeiner Zeitung. But the act that these three guys reach an audience many times greater than that of Wetten, dass...? each year. A total of 440 million hits -- worth thinking about.

Y-Titty would probably never have survived a traditional television casting. But the threshold of entry for TV-style mass media has become so low that the idea of 'casting' probably seems very 20th century. It's amazing what you can do with YouTube and a video camera.

Back to The Huffington Post. There are many familiar truisms about the Internet: the idea of "empowerment," that is, of "giving people a voice," is one of them. We know the stories about individuals who did something big and made a change. The Arab Spring belongs to this myth, as well. We've all come to know the idea of a Facebook or Twitter Revolution.

But the thing with "being heard" is that, as with most things, the devil is in the details. Anyone can post something, it doesn't even need to cost money. So far, so good. But the gatekeeper of knowledge, which is usually a search engine, responds best to well-oiled websites. Setting up an effectively-designed website requires labor, time, and usually money, as well. And know-how: meta-tags, headlines and URLs with the "right" keywords, and so on. The hope of being found has long-since led to the generation of a new industry titled Search Engine Optimization (SEO). The Huffington Post absolves authors of all that effort: everything a blogger needs here is a text; the platform maximizes the text's reach and links to the original blog.

On my last vacation, I started talking on the beach to a guy from California; when we parted he gave me as a gift the newest book by the very popular American bestselling author Brad Thor. This book, Black List, published in 2012, dealt with a secret corporation that supervised the Internet on behalf of the American government. At some point, evil bigwigs in this corporation decide to manipulate the state. The plan would have worked if an even more secret superagent hadn't single-handedly intervened to stop it. This book -- a little too brutal for my taste - is written in the best tradition of "faction," that is, a mix of fact and fiction, of reality and invention, the most famous example of which is Truman Capote's crime novel In Cold Blood (1965).

If we'd known a sufficiently enthusiastic blogger who writes about thrillers like this that only rarely make it into mainstream book reviews, we might have had advance warning about the revelations that Edward Snowden is currently revealing piece by piece.

The media has changed greatly. Media economics have changed greatly. The media spectrum has some new colors, and The Huffington Post warmly invites everyone to join in and paint with them. We would like to invite you to take part with your ideas and your opinions. We're the biggest talk show in the world, and every opinion matters.

We're on an exciting journey. And I'm excited to be here for it.