This year marks the 25th Anniversary of the Chernobyl nuclear disaster. At 1:23am on April 26th, 1986, operators in the control room of Reactor #4 botched a routine safety test, resulting in an explosion, and a fire that burned for 10 days. The radioactive fallout spread over tens of thousands of square miles, driving more than a quarter of a million people permanently from their homes. It remains the world's worst nuclear disaster to date.

Since 1993, renowned National Geographic photographer Gerd Ludwig has visited the site several times, creating an in-depth look at the many consequences of tragedy. The thawing of bureaucratic barriers in Ukraine enabled him to move freely within the Exclusion Zone and delve deeper into contaminated reactor than any other Western still photographer. "I know that my explorations are not without personal risk. However," he says, "I do this on behalf of otherwise voiceless victims who allow me to expose their suffering solely in the hope that tragedies like Chernobyl may be prevented in the future."

This spring, Gerd Ludwig plans to return to the reactor and the areas around it to investigate the state of contamination to the land; to report on the progress of its cleanup; and to examine the health consequences in the fallout regions of Ukraine and Belarus. Harnessing social media outlets like Facebook and Twitter, his project entitled The Long Shadow of Chernobyl is funded partially through the crowd-funding website Kickstarter, where individuals can pledge their support for the project.

Today, the Chernobyl Nuclear Power Plant sits inside a fenced area known as the Exclusion Zone. Radioactive remnants of the failed reactor linger inside the so-called sarcophagus, a 24-story concrete and steel encasement hastily erected after the accident. Leaky and structurally unsound, it now threatens to collapse, shaking loose enough radiation to cause a second disaster of similar magnitude. Work has started on a new encasement, which will slide over the existing sarcophagus to seal in the remaining nuclear fuel - at an estimated cost of 2 billion dollars.

Less than 2 miles away from the reactor, the evacuated town of Pripyat, once inhabited by 50,000 plant workers, is a chilling ghost town still littered with the remnants of its hasty abandonment. Within the Exclusion Zone, in dozens of abandoned villages collapsed houses are disappearing under overgrowth. Ignoring radiation levels, some 400 elderly people have returned to their homes.

From the first day, officials downplayed the damages of the catastrophe and the politics of misinformation continues: A UN report estimates that 4,000 people will eventually succumb to cancer-related illnesses as the result of the accident. But major environmental organizations have accused the report of whitewashing Chernobyl's impact and state that more than 100,000 people have already died as a consequence of the disaster.

In the desperate search for alternative energy sources, it is important that we remember the Chernobyl accident as a possible outcome of nuclear power. 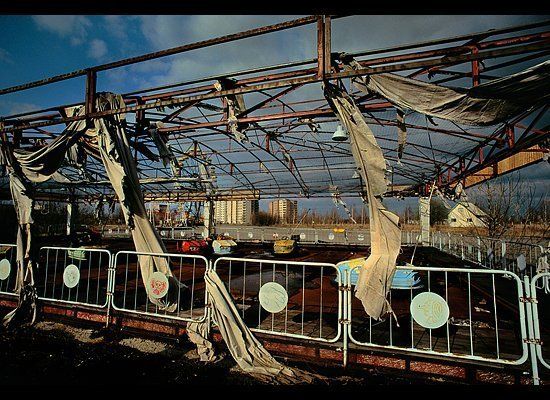