Cheryl Clarke's new poetry collection is By My Precise Haircut (The Word Works Press, 2016). By My Precise Haircut is the winner of the Hilary Tham Capital Competition, judged by Kimiko Hahn. Clarke is the author of Narratives: poems in the tradition of black women (1982), Living As A Lesbian (1986), Humid Pitch (1989), Experimental Love (1993), the critical study, After Mecca: Women Poets and the Black Arts Movement (Rutgers Press, 2005), and The Days of Good Looks: Prose and Poetry 1980-2005 (Carroll and Graf, 2006). 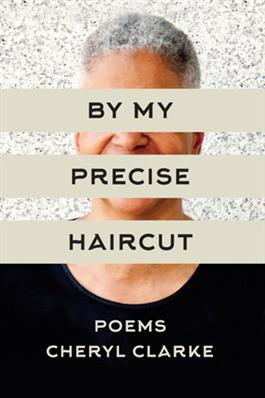 Julie R Enszer: Your collected prose and poetry came out in 2006 from Carroll & Graf under the title The Days of Good Looks. What is striking about that collection is the way your poetry and prose work together and evolve together for you as a writer and thinker. Can you talk about how the two impulses one to poetry and one to prose operate for you as a writer?

Cheryl Clarke: The will to revision. I expand and contract. Poetry and essay take the same kind of time limited-impulse, an impulse to dailiness--the quotidian, especially most of the essays included in The Days, which are more journalistic than for-all-time. The use of the titles of my books of poetry to name four of the five sections of The Days creates the sense of evolution and intersection between the poetry and prose. The publisher, part of the Perseus Group, which has now been bought by Hachette, wanted to leverage more attention to the prose. I spent a lot of time editing that collection--arranging, proofing, line and copy editing. I even asked them for more money, because of the amount of work I had to do on that collection. Much of what you see as "striking" is my editing. You see my commitments to certain leitmotifs in the collection: the poems that show the phrase "living as a lesbian," which emphasizes my dedication to lesbian community, e.g. from "Living as a lesbian: a futuristic fantasy" in Living As A Lesbian to "living as a lesbian fin de siècle" in the final section, "The Days of Good Looks"; the lesbian narratives "Althea and Flaxie" (Narratives: poems in the tradition of black women) and "Vicki and Daphne" (Living As A Lesbian); in the beginning of the collection you see the two iconic essays, "Lesbianism" and "Failure to Transform" talked about previously from the 1980's to the 2000 essay "Lesbianism 2000," which corrects some of the monolithic politics of the "Lesbianism," to the critiques of the marriage politics of the lesbian and gay communities in "The Prong of Permanency" and of black respectability and the black church in "Ecstatic Fallacies"--the two essays which conclude the collection; the tributes to the slave narrative, "Bulletin," "Sisters Part," and "no place" from Humid Pitch (which concern I reprise in By My Precise Haircut with "Belinda's Petition.") Then, the final section, "The Days of Good Looks," is comprised of poems and essays after 2001--the poems seem to layer the narrative and the lyric techniques, as in the multi-part poems, "The Days of Good Looks" and "Dreams of South Africa," and the "documentary" poem "A Sister's Lament," which continues my tradition of poems that honor black women in the military, like "Hanging Tough in the Persian Gulf" in Experimental Love (1993). The essays in the collection record my concerns for writing about literature, like "Living the Texts Out" which first appeared in the collection, Theorizing Black Feminisms (ed. James and Busia, 1990) all the way to "Pomo Afro Homo Vexing of Black Macho in the Age of AIDS," which would appear in Corpus, one of the publications of of AIDS Project Los Angeles in 2006, as well in The Days. I would love for someone to update The Days of Good Looks.

JRE: Many people might only know you from your ovular 1981 essay, "Lesbianism: An Act of Resistance". This essay both defines lesbianism and challenges definitions of lesbianism. It continues to be widely read and taught. What meaning does it continue to carry for you?

CC: I am happy for the energy I put into the "Lesbianism: An Act of Resistance." The energy reflects a time during the Women in Print Movement, mid-'70s-to mid-'80s when all of us were glorying in independent publishing, public readings of our writing, and celebrating our institutions, e.g., theaters, centers, bookstores. I am also happy for its seeming timelessness, as timeless as the anthology in which it first appeared, This Bridge Called My Back: Writings by Radical Women of Color (1982). But I say to the audiences who only know me because of "Lesbianism" or "The Failure to Transform: Homophobia in the Black Community" from Home Girls: A Black Feminist Anthology, I have continued to write both essays and poetry.

JRE: One of the things you talk about in the essay is working and loving relationships between black and white women. You wrote, "We, as black lesbians, must vehemently resist being bound by the white man's racist, sexist laws, which have endangered potential intimacy of any kind between whites and blacks." Has this changed in the thirty-five years since you wrote the essay? How?

CC: Both you and I are in interracial relationships. And, of course, we are committed to living in an imagined world where our relationships are honored. The danger to potential and actual intimacy between black and white women is still prevalent and present, but that danger does not let any of us off the hook for emotional honesty. I think the critiques of black women who are in relationships with white women have abated some. If I sense lack of approval of my interracial self, the extent to which I will speak about it to those individuals depends upon how much I want them in my life. Lesbian-feminism is responsible for the interracial relationship (smile) between women. Many white lesbian-feminists are my best friends. I still regret ending "Lesbianism" with an appeal to love, however. This is what we do when we can't go anywhere else.

JRE: By My Precise Haircut comes out twenty-three years after your last collection of poetry, Experimental Love. What accounted for the long pathway between these two collections? What challenges do you experience as a writer staying in print and in literary conversations?

CC: Every writer who continues to write has to depend on intergenerational audiences. I feel I owe a debt of gratitude to Women's and Gender Studies departments, which have kept us in the "conversations" of those committed to studying and reading and learning from the writing of women; and to activists who have kept me in their lives and have continued to be influenced by my insights. I continued to be asked to submit my writing to anthologies, collections, and other publications since 1993. And I continued to write, which helps. I always try to keep a manuscript going. Audre Lorde advised me back in 1982, after Narratives, when she still was on the Kitchen Table collective, "Cheryl, you should be working on your next book." I have tried to follow that advice. Also, thanks to scholars like you, Julie, I have been able to continue to contribute to our literary conversations. You have asked me to participate on Sinister Wisdom's Board, to be a poetry judge for the Deming Fund, to co-edit with you the Journal of Lesbian Studies special issue "Where Would I Be Without You" on the friendship between Pat Parker and Judy Grahn. You also are responsible for entering me into the Hilary Tham Contest sponsored by The Word Works Press, from which my manuscript, By My Precise Haircut, was chosen by judge, Kimiko Hahn, in February of 2015.

JRE: I am committed to intergenerational literary citizenship. Classic lesbian-feminist publisher Firebrand Books published your earlier work, and Narratives was distributed by and then reprinted by Kitchen Table Press. Can you talk about the role of the feminist press in your life as a writer?

CC: Were it not for the feminist press, you would not know about Cheryl Clarke.

JRE: On one hand The Days of Good Looks is a pinnacle of your writing career, but on the other hand, I feel like you are still deeply and actively engaged in producing new work. What project--or projects--are you working on next?

CC: I am always writing. I work on poetry every week. I want to write a book of essays entitled "Adult Black Culture: Gaining Entry." And I will talk about its title in the introduction to the collection. I am working on a poetry manuscript--no title as yet.

JRE: We will all stay tuned for the next book!

For more information about Cheryl Clarke, visit her website:
www.cherylclarkepoet.com