Every few years somebody discovers the French-American artist Marcel Duchamp (1887-1968), connects him with chess and quotes him:"While all artists are not chess players, all chess players are artists."

Duchamp was exaggerating, but he loved chess and he was a decent player. In three chess olympiads in the 1930s, he played on the French team alongside the world champion Alexander Alekhine (1892-1946). They must have discussed the similarities between chess and art.

"To me, chess is not a game; it is art," Alekhine said. The quote was prominently displayed at the website devoted to the Alekhine Memorial chess tournament. The event finished this month. It was a showcase of the Russian Chess Federation, a tribute to the fourth official world chess champion. Many world-class players took part, including the world champion Vishy Anand.

It was sponsored by Andrei Filatov who loves to place chess players amid fine paintings, hoping that they, too, will create masterpieces. Last year he helped to stage the world championship match between Anand and Boris Gelfand at the Tretyakov Gallery in Moscow. He made different arrangements for the Alekhine memorial this year - dividing it between the Louvre Museum in Paris and the Russian Museum in Saint Petersburg. The grandmasters played on a stage, decorated with pictures from Alekhine's life. 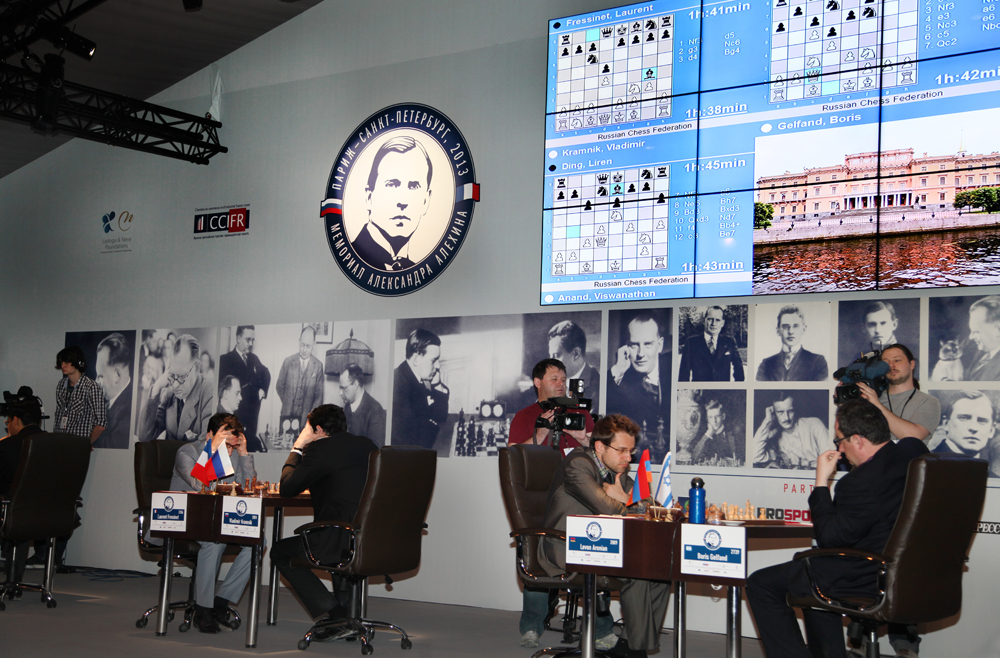 The photo is from the last day in Paris. In the forefront, the eventual co-winners Gelfand and Levon Aronian, play against each other. On the next table a big sensation is being played out. The French grandmaster Laurent Fressinet is about to take down the former world champion Vladimir Kramnik, and in Alekhine's style. The stage has almost a mythical feeling: so many Alekhine's eyes watching every single move of today's great players.

The French players did very well in Paris. Before the tournament moved to Russia, Maxime Vachier-Lagrave led the field and Fressinet shared second place. Alekhine and Duchamp would have approved. It was a different story in Saint Petersburg. Here is the final tally. Aronian won the trophy on a tiebreak.

Alekhine would have enjoyed the first round game between the top-rated Aronian and the three-time Chinese champion Liren Ding, a perfectly timed attack. It won the prize for the best combination. 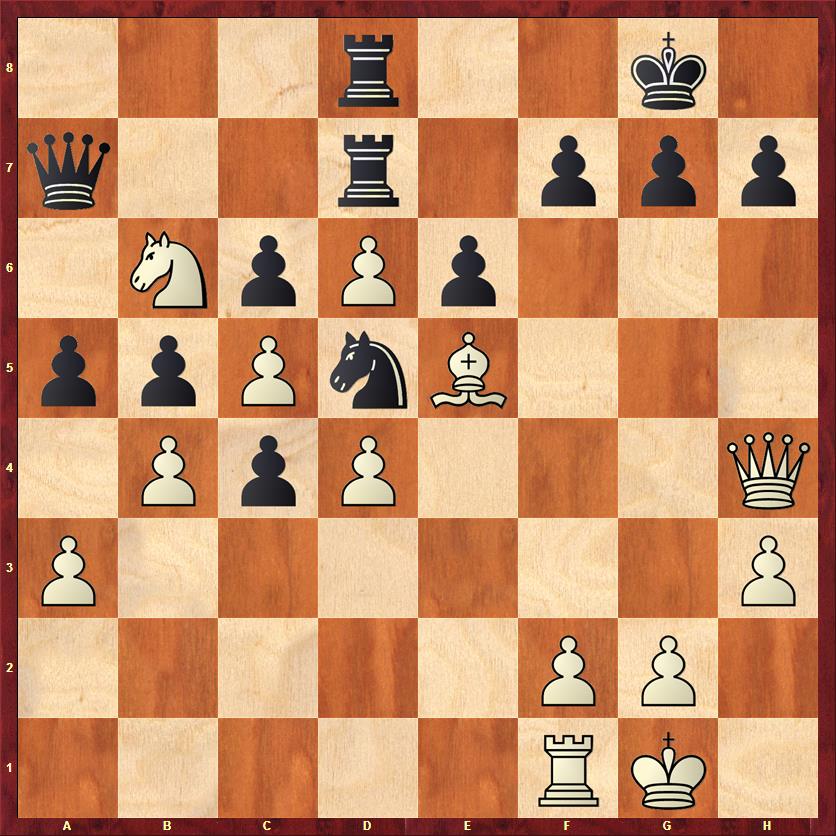 Aronian is trying to give the exchange back and create a defensive wall, but the three-time Chinese champion does not buy it and rips black's position apart.

37.Bxg7!
Tearing up the pawn blanket in front of the black king.

What could the players say about the great maestro? Here's a sampling of their thoughts:

Alekhine was an outstanding, impressive, active, tough, imaginative and entertaining player, close to our time, perhaps even originating the modern play... He made a great contribution to many openings... Constantly pushing for initiative, he liked to place his pieces into more dynamic position... He beat Jose Raul Capablanca who had chess worked out and made it look easy... Defeating him was almost an impossible task in the eyes of public, but Alekhine did it in the 1927 epic world championship match, outplaying his Cuban foe in technical as well as in complicated positions...

The Soviets had a complicated relationship with Alekhine, but eventually embraced him in the 1950s. They published collections of his games and organized the first Alekhine Memorial tournament in Moscow in 1956, won by Mikhail Botvinnik and Vassily Smyslov.

Alekhine became an inspiration to many generations. Kasparov, Aronian and countless others were influenced by his games. Peter Svidler's mother didn't play chess, but instead of singing lullabies to her son, she would read him from books of Alekhine's games, and watched him to become six-time Russian champion and one of the world's best players.

Alekhine's way of playing was not endorsed by all players. "His style worked for him, but it could scarcely work for anybody else," wrote Bobby Fischer nearly 50 years ago in Frank Brady's Chessworld. "His conceptions were gigantic, full of outrageous and unprecedented ideas."
Fischer was quite capable of creating brilliant combinations and surprising attacks, but he preferred to play "good moves," a lot of good moves.

Fischer's style of play was endorsed by Magnus Carlsen, the world's top-rated player. "What looked quite difficult, Fischer made look easy." he said. "I try to emulate that." Letting his intuition run loose, Carlsen puts a lot of effort into the middlegame, slowly tightening the screws.

In Carlsen's recent interview with the PBS television host, Charlie Rose, the word "strangulation" pops up. Anatoly Karpov was accused of the same python-like style. It sounds violent, but may be this is what chess is. Even the artist Duchamp said that chess is a violent sport.

It doesn't hurt your body, but your brain, your ego. Instead of concussions chess players suffer humiliation after a terrible loss. They start to question their confidence, doubting the worthiness of what they do. But in the end, they collect themselves and go back to the chessboard. And some of them may remember Alekhine's words: "I consider chess an art and accept all the responsibilities that art places upon its devotees."

Anand mentioned Alekhine's grandiose victory in San Remo in 1930. Alekhine finished undefeated with 13 wins and two draws, 3.5 points ahead of his nearest rival Aaron Nimzowitsch. It was the mutual encounter between the first two winners Anand seemed to enjoy the most. In the final position Nimzowitsch could hardly move; Alekhine created a memorable zugzwang. 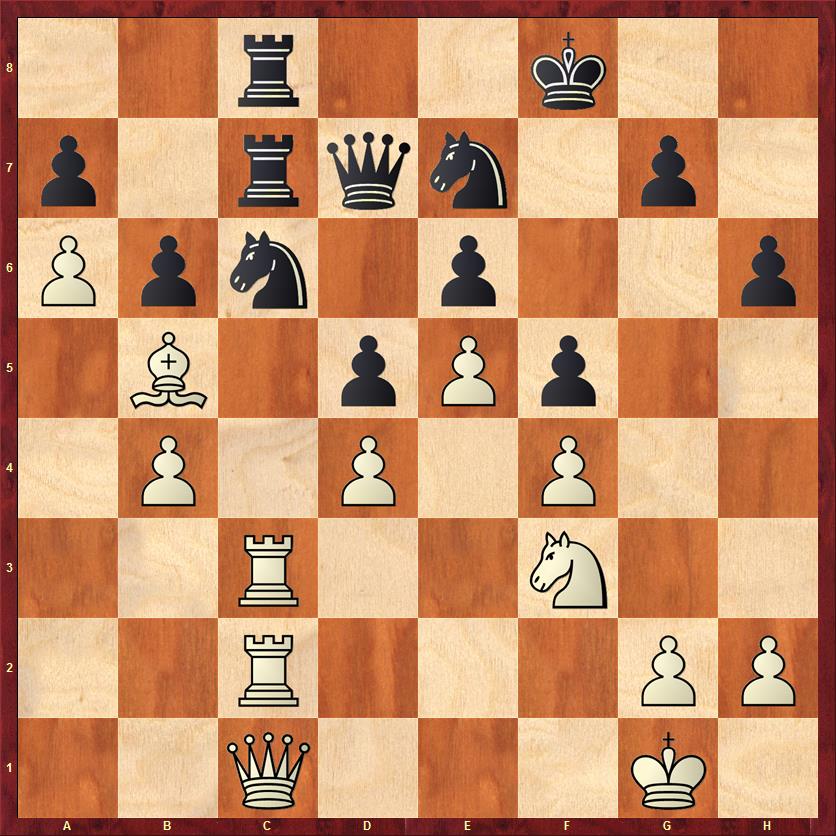 Black is pinned all over. His pieces are jammed in tight quarters. Alekhine's constellation of heavy pieces resembles a train: the queen is shoving two rooks in front of her like a locomotive pushes two wagons.
It was also used by Bobby Fischer in the first game of the match against Boris Spassky in 1992 to gain an open file.

27.Ba4!
"The last line of the positional attack started 12 moves ago. In order to save the piece threatened by 28.b5, black must sacrifice the b-pawn. After this, he succeeds in protecting the important squares with the king but must still resign as a consequence of a complete zugzwang. An instructive finish!" - Alekhine

Russell Enterprises recently reissued Alekhine's Best Games 1908-1937. This 21st Century Edition is in algebraic notation with Alekhine's notes to 220 games. The text is left as Alekhine wrote it, but analytical corrections, additions and enhancements are available for download on the publisher's website.

The image is from the official site.