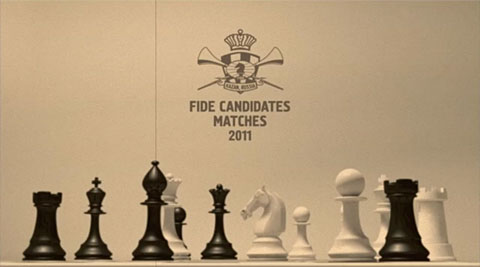 The top-seated Armenian grandmaster Levon Aronian was the heavy favorite to emerge as the winner of the 2011 FIDE Candidates matches in Kazan, Russia, and challenge Vishy Anand of India for the world chess title in 2012. According to the same scenario, Aronian's opponent in the Candidates Final was supposed to be the Bulgarian grandmaster Veselin Topalov. But both grandmasters are gone now, having lost the Candidates quarterfinal matches. Topalov was eliminated by the U.S. champion Gata Kamsky, Aronian lost to Alexander Grischuk of Russia.

The semifinals - Kamsky vs. Gelfand and Kramnik vs. Grischuk - resume Thursday and can be followed life on the FIDE web site or on Playchess.com.

Here is the quarterfinal wrap-up.

The match began in earnest with the rapid games after the first four regular games were drawn.
Grischuk won the match with an excellent victory in the last rapid game. He came into prominence during the 2000 FIDE knockout world championship in Delhi, qualifying for the semifinals where he lost to Alexei Shirov. In 2002, I talked to Grischuk after the Prague agreement was signed in the Czech capital. The agreement was a clumsy attempt to bring Garry Kasparov back to big chess and to unite the two world championship titles, but it left Vishy Anand and Grischuk out in the cold. "I don't mind," the 19-year-old Grischuk said. "I still have time, but I feel sorry about Vishy." Time heals all wounds. Anand, 41, is the world champion. Grischuk, 27, is going to meet the former world champion Vladimir Kramnik in the semifinal in Kazan. Could this be his year?

For years, Radjabov tried to succeed in the elimination events by betting on the blitz games. The shorter the time limit, the better for him. It almost worked against Kramnik. After drawing four regular and four rapid games, Radjabov won the first blitz game. Kramnik needed a win in the next game and got only a small edge in the endgame when the game clock stopped working. When the game resumed, Radjabov's position collapsed quickly. Kramnik, who in his youth could match Garry Kasparov move by move in blitz games, clinched the victory in the match by triumphing in the last two games.

Gelfand made his victory look easy by drawing three and winning one game, leaving his opponent without chances. The Israeli grandmaster knows the Najdorf Sicilian with the black pieces inside out and Mamedyarov played right into it in the only decisive game. Gelfand blunted white's attack with a thematic exchange sacrifice and grabbed many pawns, forcing the Azerbaijani GM to resign. Gelfand will meet Kamsky in the semifinals.

Despite winning the U.S. championship last month, Kamsky was not given much hope against Topalov. After all, the Bulgarian grandmaster beat him 4.5 - 2.5 in the World Chess Challenge in Sofia in 2009. For the match in Kazan, Topalov as white prepared a few novelties against the Grunfeld defense and twice gained some advantage from the opening. But Kamsky has always been a terrific fighter, not to be brought down easily. In the game he won, Kamsky played creatively and neutralized white's initiative rather quickly. Topalov's initiative stalled, he could not find a good plan and succumbed to Kamsky's fiery attack (see below). In the last game, Kamsky needed a draw to clinch the match. He was in the same situation at the U.S. championship. His opponent, Yuri Shulman, opened the game too early and Kamsky equalized handily and won the title. "He should have built up the game more slowly and put pressure on me," Kamsky advised. And it was precisely what Topalov did. In time trouble, Kamsky blundered and it seemed Topalov could win as he pleased. But he picked the wrong way and Kamsky found a way out. 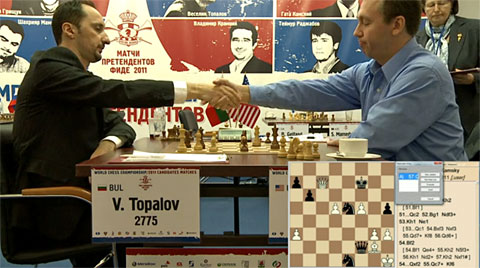 5...Nb6 (Black's position after 5...Nxc3 6.Qxc3 Rg8 does not inspire confidence.) 6.d4 Bg7 7.Bf4 Be6 8.Qa3 (Since the great Ukrainian GM Vasily Ivanchuk played it twice, the queen move should not be dismissed. On the other hand, Ivanchuk is capable of making almost anything work. Still, the queen is out of play and may remain there.) 8...Nc6 (Developing and hitting the center is not a bad idea.) 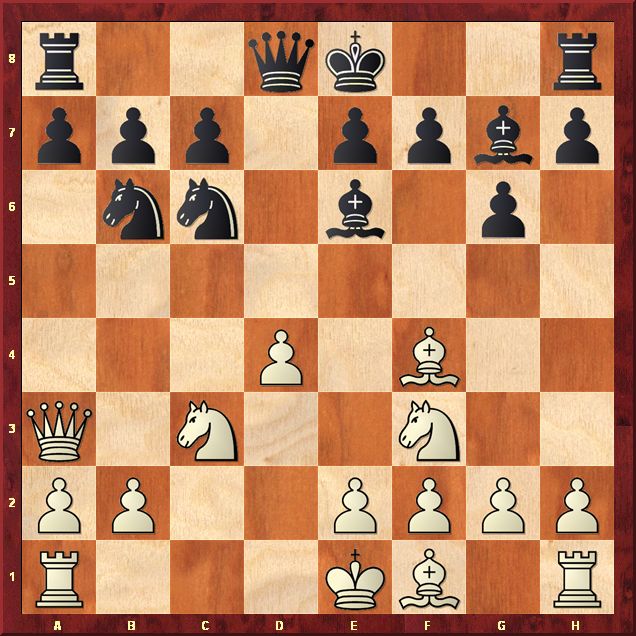 12...Ncb4 (Sometimes it is a good idea to reflect into the past. The game Korchnoi-Spassky, Candidates match 1968, comes to mind. Spassky had a knight on b4, Korchnoi attacked it with a pawn (a3) and black "protected" it with a cool move a7-a5. 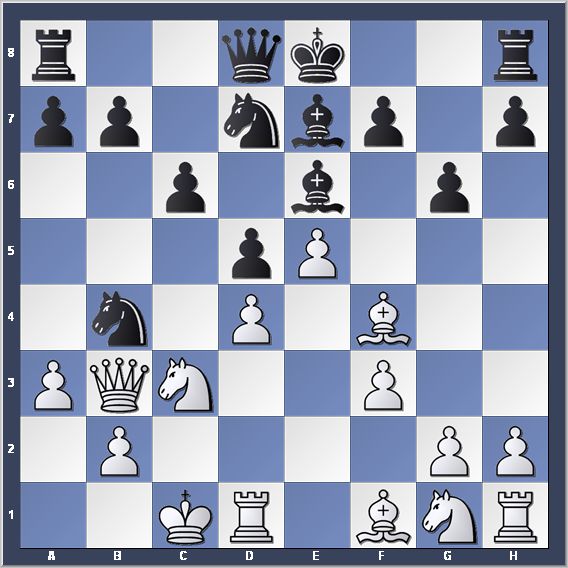 But Topalov is unable to attack the knight on b4 with a pawn, because his queen stands in the way.) 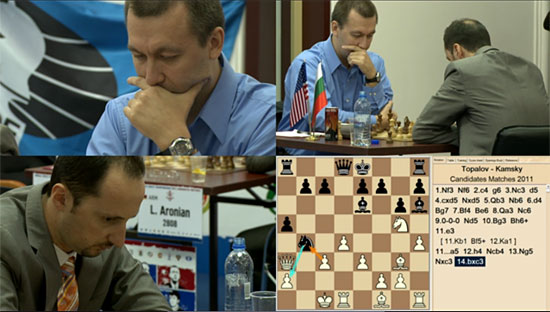 While Kamsky (in blue shirt) and Topalov think, the Russian commentators discuss the knight leap 13.Ng5. 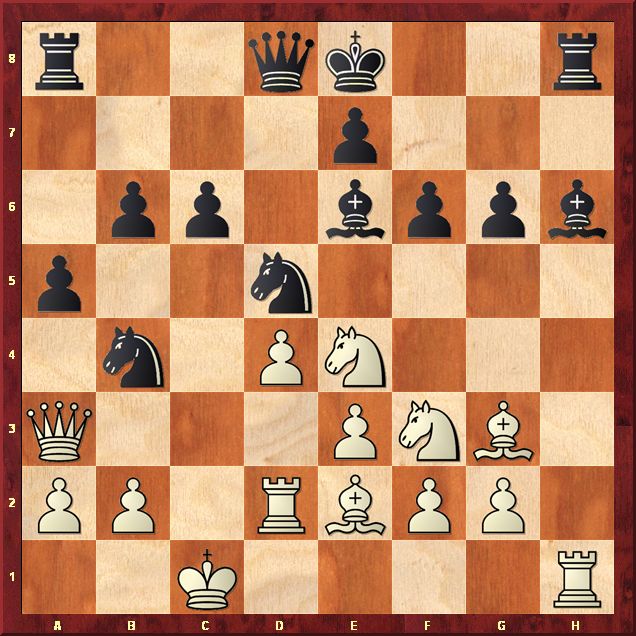 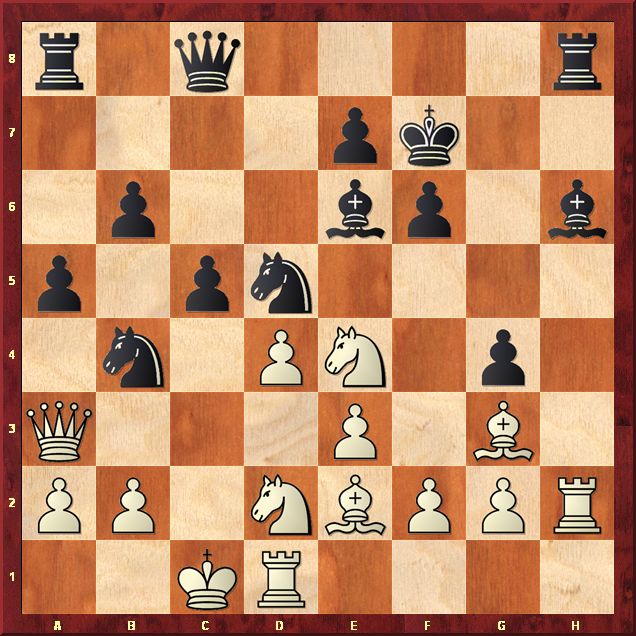 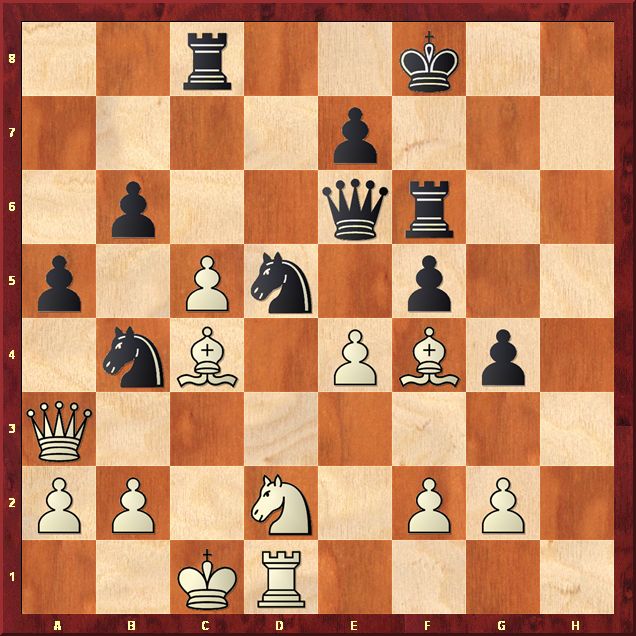 Images from the official site. 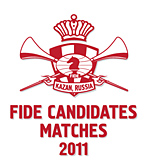