Plagiarism was in the news lately and chess has its own champions. They use other people's material without attribution and present it as their own. To put it less elegantly, the offenders blatantly, unscrupulously and dishonestly steal work from other authors. They behave like pirates: rampaging, pillaging and raiding books, magazines and web sites -- taking everything they like. And they don't mind the heavy lifting.

The victims would rather not talk about it. It invokes bad memories and their experiences are too painful. They spent days, weeks, months, sometimes years to formulate their thoughts. And with a couple of mouse clicks and a few keystrokes, their work is gone.

Efstratios Grivas, a Greek grandmaster, knows what to do. He protects himself by placing a little warning at the end of his articles: they are protected intellectual property under the International Copyright convention and any use and distribution, (via print, electronic format or in any form whatsoever), as well as posting on the Web, is strictly prohibited without express written permission.

But this does not seem to apply to Grivas himself. He had no problems lifting text from this copyrighted Huffington Post chess column. He didn't mention on his DVD Chess Expertise Step by Step, Vol. 4, Endgame Magic where he found it. Nor did he say who actually wrote the comments for the Kasparov-Karpov game.

Plagiarists might be nice people who just cannot resist stealing and sometimes even return to the scene of their crimes. It took the Dutch writer Tim Krabbé several decades to create his wonderful web site of Chess Curiosities. It has been raided repeatedly. Krabbé calls it "emmsing." after the English grandmaster John Emms who appropriated his material for the book The Most Amazing Chess Moves of All Times. Emms even called Krabbé and asked him for more examples for his book. "Brilliant," wrote Krabbé. "The art thief phoning the gallery he has just pillaged: Got any new acquisitions yet?"

Grivas tried to be nice. He wrote he liked my articles in the Huffington Post in general, calling them educational, professional and very well done. He even told me where he found my text. He admitted no guilt. After all, he threw in a few additional words and chess moves to "enrich" my text. I discovered the theft by reading Michael McGuerty's review of Grivas's DVD on Chess Café. As I was watching the DVD I felt like a playwright whose lines were read by a bad actor.

Flattery is where they try to get you. A noted chess journalist wanted to make me feel better after he lifted a paragraph from my work. He explained to me that I was just elevated among the classic writers who are widely quoted. Grivas may come close. He wrote that various phrases in his and mine text are identical, but it was impossible to change them. "Your English is much better than mine by far and there was no way to make them better!" he wrote.

John Donaldson, the captain of the U.S. Olympiad team, had several pages of his material lifted by the English grandmaster Raymond Keene. In the end, the American publisher of Keene's book, Henry Holt and Company, paid Donaldson $3,000. John pointed me to Edward Winter who wrote about it in detail in his article Copying. Mr. Winter tracks down the plagiarizing offenders and Efstratios Grivas could be a nice addition to his list.

For those who would like to learn the art of plagiarism, Grivas provides a perfect example. With little practice you may reach his heights. Look: 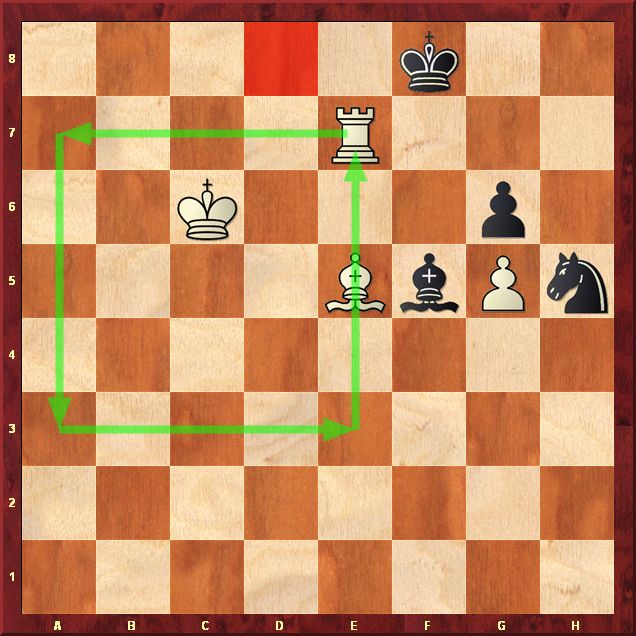 This is the original diagram. If you run out of some colors, you can do what Grivas did: just use green. 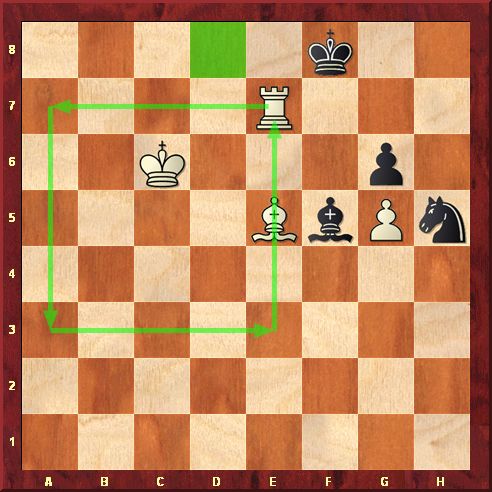 We now come to the text. Below the original Huffington Post text (HP) is Grivas's version in italics.

HP: To win the game, Kasparov has to walk his king to the (red) square d8. He can only do it by having his rook moving around a magical square.

Grivas: ...To win the game, Kasparov has to walk his king to the square d8. He can only do it by having his rook moving around a magical square...

HP: Drawing one side of the square.

Grivas: Drawing one side of the square.

HP: The second side of the square is born. But why has the rook land on the square a3? It prevents the black knight from jumping to the square g3.

Grivas: The second side of the square is born. But why has the rook land on the square a3? It prevents the black knight from jumping to the square g3.

HP: The rook draws the third side of the square, preparing the white king's journey to d8.

Grivas: The rook draws the third side of the square, preparing the white king's journey to d8...

HP: The king's journey is over and white pushes the black king from the f-file.

Grivas: The king's journey is over and White pushes the black king from the f-file.

HP: Kasparov makes an important bishop move precisely in the moment when the black knight can't move. It opens the road for the rook to come back to the square e7.

Grivas: Kasparov makes an important bishop move precisely in a moment when the black knight can't move. It opens the road for the rook to come back to the square e7.

HP: Returning where it all began, the rook finishes the square journey.

Grivas: Returning where it all began, the rook finishes the square journey.

HP: The domination is complete: the knight at the edge has no moves. White can easily force the black king to the corner.)

Grivas: The domination is complete: the knight at the edge has no moves. White can easily force the black king to the corner. 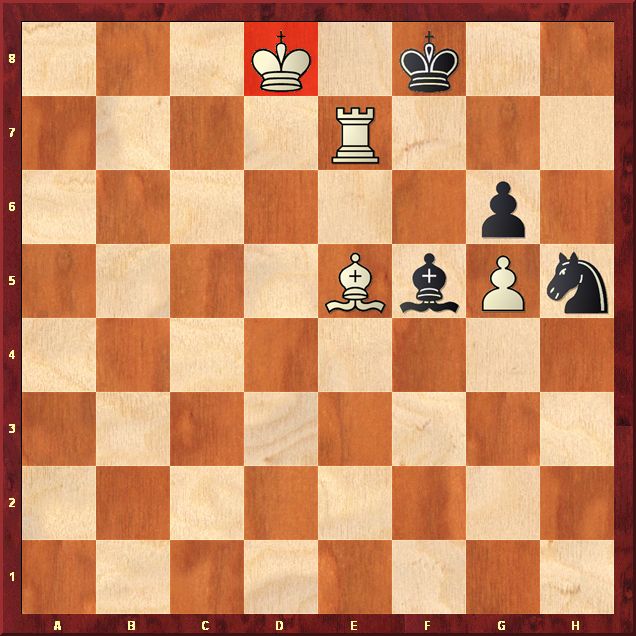 HP: Kasparov is looking for a free square on the 8th rank for his rook. It was possible to play directly ...

Grivas: Kasparov is looking for a free square on the eighth rank for his rook. It was possible to play directly ...

On September 1, 2012, I received an email from Lubomir Kavalek. He had just received a copy of the latest release by Russell Enterprises, Chess Analytics: Training with a Grandmaster by Efstratios Grivas. In the message, he points out that language used in the analysis of game 206 on pages 249 and 250 in the book is identical to the language he used in a column he wrote for the Huffington Post published on October 31, 2010. He sent me the link to his original column. This was the first time this issue had been pointed out to me. It did not take long for me to agree with his claim. Indeed, the language used by Mr. Kavalek in his October 31, 2010 column was the same in Grivas' book.
For the record, when I contacted Mr. Grivas, he denied using the Kavalek column as his source and pointed out that the analysis could be found in several places, including, for example, Chess Informant. This of course misses the point. It was not the moves, but the narrative text that had been used. That was clear to anyone who took the time to compare them.
I have been involved in chess publishing many years. During that time I have been outspoken in my condemnation of those who plagiarize the works of others. Russell Enterprises have never knowingly published material which has violated copyright.
Had we known of this situation, we would not have allowed the section in question to be published. We have long respected Lubomir Kavalek both as a chessplayer and journalist and would not consider republishing his work - or anyone else's - without the proper permission and credit. It was never our intent to use Mr. Kavalek's work without his knowledge or consent and we regret having done so.
Sincerely,
Hanon W. Russell
President, Russell Enterprises, Inc.

Before publishing this column I wrote a message to GM Grivas:

thank you for your letter. I am happy you like my Huffington Post articles, but I am unhappy that you used my material word by word in your DVD without attribution to me.

If my language was so perfect and you could not change it, you could have simply stated where the material was coming from and who was the author. And you could have asked for my permission to use it. You didn't do it.

As a consequence, Chessbase produced your DVD and is selling my material under your name.

Grivas didn't answer it and we published the column. Chessbase now issued an apology attached to the review of the DVD with the stolen text:

At the time of publication of this review it had escaped our attention - as it had the attention of the original reviewer at Chess Café - that the analysis provided by GM Grivas was in fact taken, often verbatim, from a Huffington Post article published by GM Lubomir Kavalek two years ago. The oversight is especially embarrassing since the original Huffington article had appeared on our newspage as well. The matter has been minutely documented in a subsequent article by Kavalek's entitled "Heavy Lifting"

Grivas has been added to the list of plagiarists in Edward Winter's article Copying.