Imagine a marathon athlete puffing on cigarettes during the 22.38-mile run. But chess was the only sport where smoking was not only possible; it was quite common. For some mental athletes, such as the late world chess champion Mikhail Tal or the legendary grandmaster Viktor Korchnoi, performing without cigarettes was unthinkable.

The late Dutch grandmaster Jan Hein Donner was a chain smoker and so was I, and when we played against each other, the chessboard disappeared in a cloud of smoke. We lived under the illusion that cigarettes can calm our nerves and even stimulate us to make good moves. 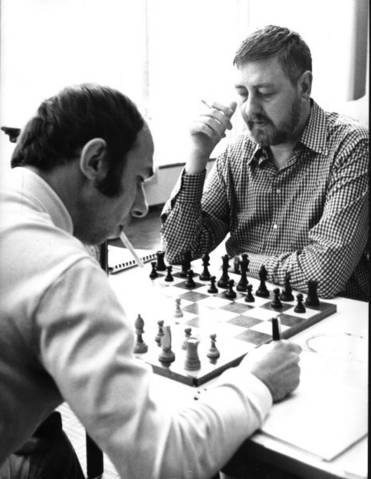 Our cigarette duel with Donner (right) in Amsterdam in 1973

During our game at the traditional tournament in Wijk aan Zee in 1969, Donner made a major discovery in the Najdorf Sicilian. He boldly steered his king to the kingside where I was about to launch a devastating storm. I thought I could sacrifice three pawns, leap with my knight into his stronghold and claim a full point with a powerful attack. But my fellow smoker found a nice defense and the game was eventually drawn.

12.Bxf6 Nxf6 13.f5 (Hitting the pawn e6 before playing g4-g5 puts some pressure on black.) 13...0-0!? (I could not believe what I saw. I expected something like 13...e5 14.Nde2 h6 to stop my kingside advance. Was Donner joking, castling under a mating attack? I know he was a brilliant defender who believed he could survive any onslaught. Bringing him to his knees was difficult, but the short castle seemed to be too much to go unpunished. It turned out, he made a profound judgement over the board. We were on our own: no home preparation, no seconds, no computers.)

14.g5 Nd7 (When we arrived at this position, I thought black should be crushed and it didn't take me long to find how to proceed.) 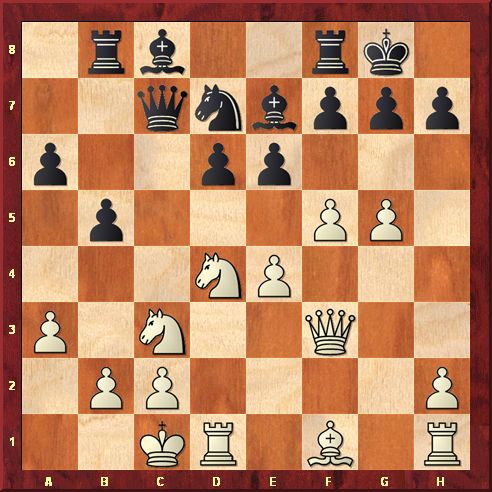 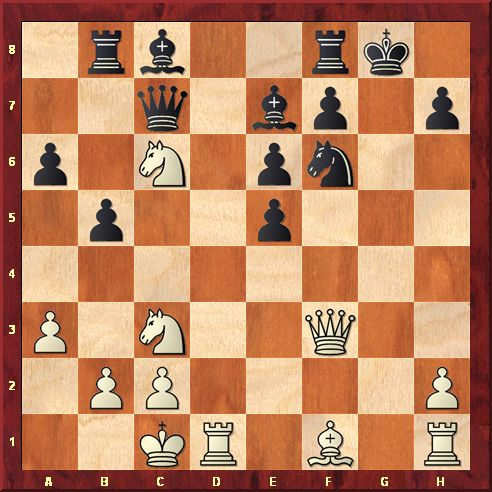 (The main point of the leap is not to attack the rook on b8, but to bring the knight to e5, after Qf3-g3+, and create dangerous threats.) 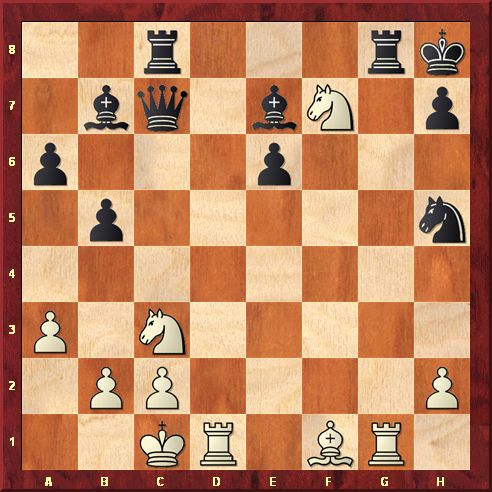 Black has better alternatives after 20.Nxe5:

20.Bg2 (I wanted to control the diagonal h1-a8. GMs Svetozar Gligoric and Dragoljub Velimirovic suggested 20.Rg1 Bb7 21.Qg3 Rg8 22.Qf2 and the chances are roughly equal, although it is clear black has plenty of material for the exchange.) 20...b4 21.axb4 Qxb4 22.Rhe1 Qf4+ 23.Qxf4 (23.Kb1 would give white better prospects.) 23...exf4 (Black has a good compensation for the exchange and splitting the point after some dramatic play was a fair result.)

We didn't pay much attention to this game afterwards and Donner's idea lay dormant for four decades. A lot has changed since. Smoking, for one, is not allowed in chess tournaments anymore.

Had we thought about castling short one move earlier, it would have reshaped the Main line of the Najdorf Sicilian and pages and pages of analyses would have become useless. The difference was in the placement of black's rook, only one square apart. The idea would have remained intact and Donner's plan would have still retained its punch.

It was precisely what the Chinese discovered recently. Donner's bold stroke, in a slightly altered form, emerged in the games of the young Chinese woman grandmaster, Ju Wenjun,21. Last year, she played the variation against the three Russian sisters, Nadezhda and Tatiana Kosintseva and their sister-in-arms, Alexandra Kosteniuk.

Earlier this month in the German Bundesliga, Alexei Shirov tried to trash the idea the same way I did against Donner and won. A few days later, Ju Wenjun had the answer to Shirov's attack in the game against the new Turkish champion, Dragan Solak. It was played at the Aeroflot Open in Moscow that ended Wednesday. The Polish GM Mateusz Bartel won the event on tiebreak. He edged out two Ukrainian grandmasters, Anton Korobov and Pavel Eljanov. All three scored 6.5/9.

Donner was one of the greatest chess writers and a leading Dutch player following the world champion Max Euwe's reign and before the emergence of Jan Timman. Donner was also the first Western grandmaster to be defeated by a Chinese player in a game that became known as the Chinese Immortal. I think it's time the Chinese paid him back and called the variation used by Ju Wenjun - the Chinese Donner. 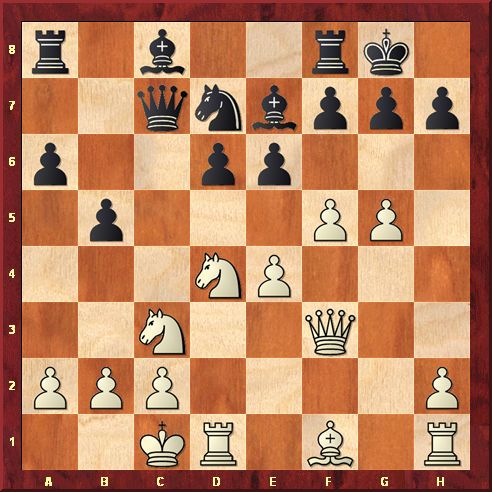 During the first February weekend, Alexei Shirov followed my footsteps and played this pawn breakthrough in a Bundesliga game against Niclas Huschenbeth.

Let's see how Ju Wenjun fought against white's other options:

We reached a postion almost identical from my game against Donner. The only difference is in the placement of the black queen's rook 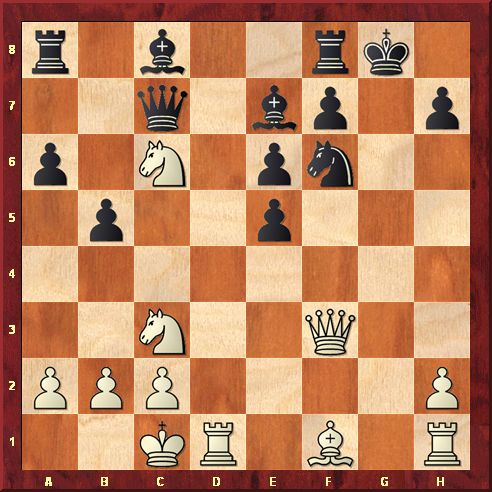 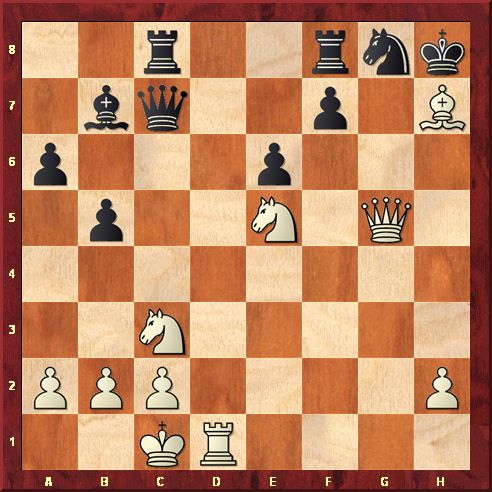 At the chess olympiad in Buenos Aires in 1978, Donner lost to a Chinese master, Liu Wenzhe. Liu's victory was brilliant, the first defeat of a Western grandmaster by a Chinese player.

After he lost the game, Donner sat in his chair for another 15 minutes, staring at the chessboard with amazement. And then, understanding the humor of the situation, he mocked himself: "Now I will be known as the Chinese Kieseritzky."

Lionel Adalbert Bagration Felix Kieseritzky (1806-1853), became famous, perhaps unfairly, for losing to Adolf Anderssen in London in 1851 in what became known as the Immortal Game.

Liu was one of the first Chinese chess coaches. He revealed his training methods and secrets in the book Chinese School of Chess. His game against Donner was dubbed "the Chinese Immortal." 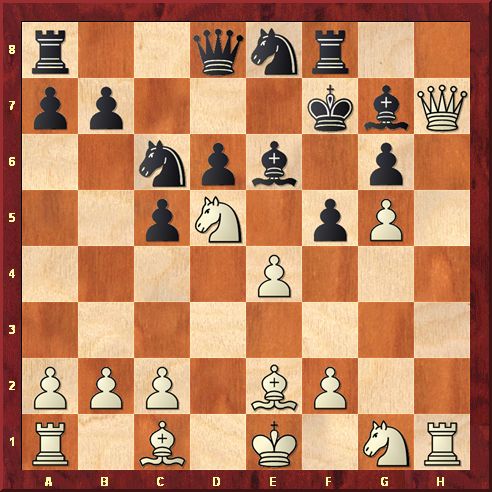 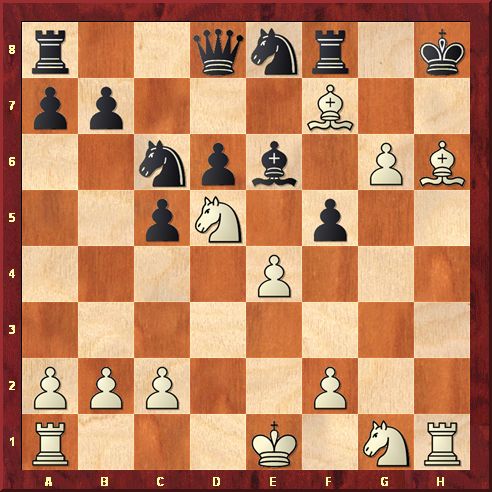 A guide to opening novelties

Tournament players can follow new opening ideas easily today. Here are some of the major choices with brief descriptions:

• The Chess Informant, first published in 1966 in Belgrade, has been the main choice of many tournament players for decades. Almost every world's top player used to write for them. It has been languishing lately, but is trying to make a comeback with their 113th publication. They are bringing Garry Kasparov on board in a "Garry's choice" column and there are many more textual columns in English.

• New in Chess Yearbook has developed into a major theoretical publication after their initial cooperation with the Informant in the 1980s didn't work out. NIC published 101 Yearbook editions, four in a year. They attracted leading opening experts to write for them. Kasparov contributed to their 100th anniversary issue.

• Chess Evolution, produced in cooperation with Quality Chess, is a bi-monthly publication that started last year. Strong grandmasters dissect important games in depth in English. They write mostly about new opening ideas, but there are also endgame and puzzle sections.

• Chessbase Magazine follows a similar trend on CDs, but on a large scale. They report on tournaments, interview players, follow opening trends, analyze endgames and use videos. You can also download the contents. The Chessbase 10 or 11 programs in combination with Mega 2012 database weekly updates can also provide openings news.

• Chess Today, GM Alexander Baburin's daily online newsletter, has been a wonderful source of information for many tournament players. First published in 2001, it consists of 4018 issues (!). The writers comment on theoretical novelties, middlegame tactics and endgames and review chess publications. Their other main analyst, GM Mikhail Golubev, keeps a close watch on anything Sicilian and King's Indian.