President Vaclav Havel died last Sunday and the sad news spread quickly. The Czechs lost one of their best statesmen - a good, modest man who was respected throughout the world. Thousands walked on Wednesday behind his casket from the center of Prague, across the Charles Bridge to the Prague Castle. Czech and foreign dignitaries will pay their last respects to Havel at a funeral ceremony in the St. Vitus cathedral on Friday.

Havel became perhaps the only head of state who played - and won - an actual chess game during a ceremonial opening of a chess tournament. It happened in Prague in 1990 and here is the account I wrote around that time: 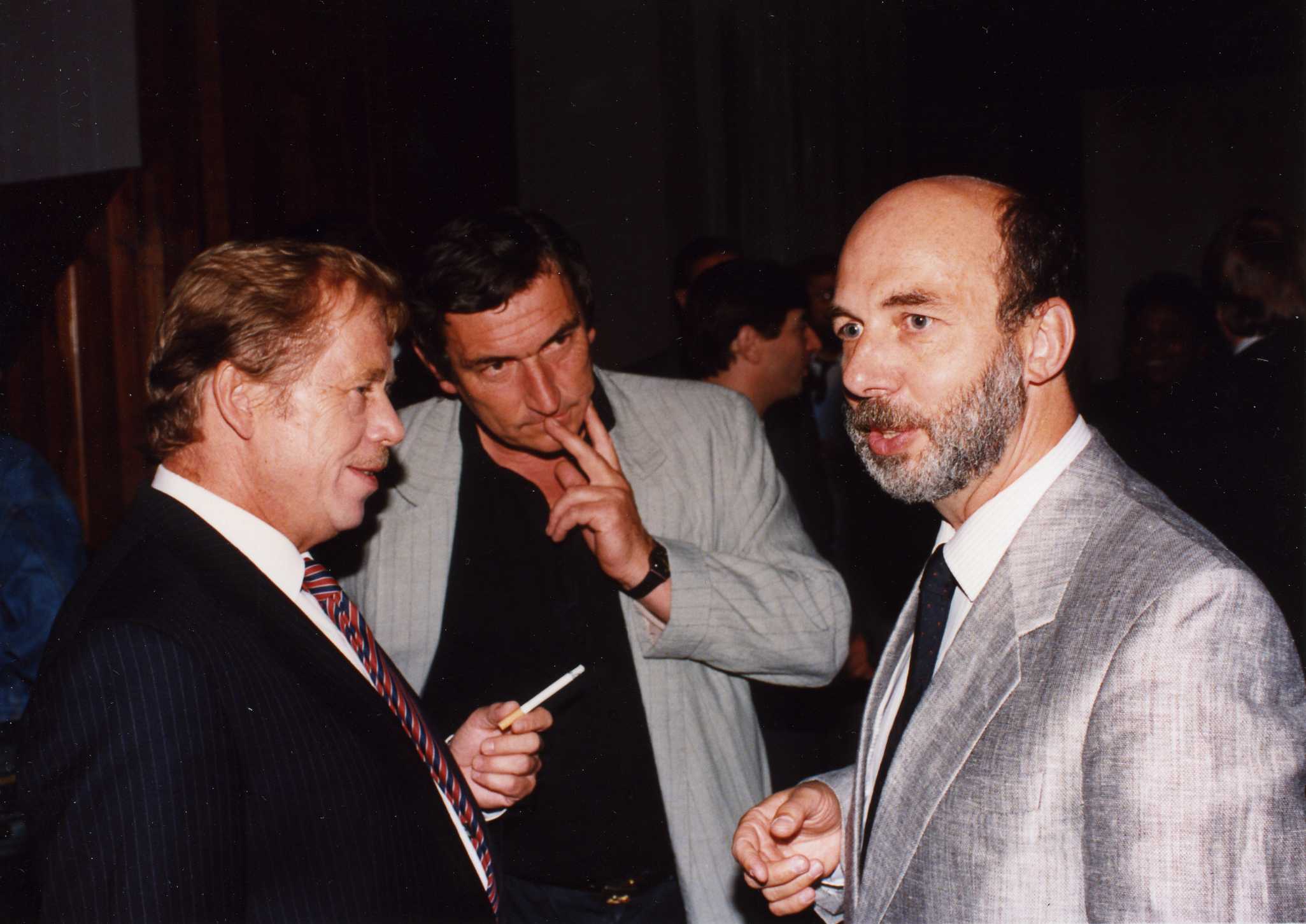 I was trying to explain to the president and his advisor, Jiri Krizan (pictured in the middle), the protocol and how he would make a single move on a chessboard. But Havel interrupted me.

"Can we play a little more?"

A meek entreaty, but since it was uttered in Czechoslovakia, by the president of Czechoslovakia, it amounted to a command. And so it was that on Aug. 26, 1990, the charismatic, enigmatic playwright-president Vaclav Havel and I played a game of chess.

It wasn't supposed to have happened. Havel was merely to have been the celebrity host of the opening ceremonies of "Prague 1990," the international grandmaster chess tournament I had organized under his auspices, as a tribute to the country's new democracy.

At such events, dignitaries's play is symbolic, usually limited to one move. Often, they simply pose contemplatively at the chess board while cameras zoom in.

But Havel disdains the ceremonial. He did not wish to be limited to only one move he was supposed to play against his designated dignitary opponent - Bessel Kok. Kok, CEO of the Belgian financial telecommunications company SWIFT, was chairman of the Grandmasters Association, but he was not himself a grandmaster. For an amateur like Havel to defeat an experienced player like Kok may be a worthy triumph, but to defeat a grandmaster would be....well, about as heady, and about as unlikely, as dissident intellectual melancholic getting elected president of a Communist bloc country.

The logistics were tactfully scripted by presidential adviser Jiri Krizan, formerly a screenwriter. Krizan suggested that I could act as chess adviser to Kok - standing by him and helping plot his strategy - and in that way the president would get his wish and actually compete against me. I suggested that Krizan be Havel's adviser: "If my memory serves me, he used to play chess quite well," I told Havel, recalling my last game with Krizan. It was at a New Year's Eve party in Prague in 1967. Next year I would leave Czechoslovakia and we would not see each other for 22 years.

Havel agreed to the four-man game.

When I announced to the crowd in the Congress Hall of the Hotel Intercontinental that the president would not only throw out the ceremonial first ball, but would be the home team's starting pitcher, pandemonium erupted.

The attendance was encouragingly robust. And when Havel stepped up to the chess table, and the cheering crowds surged forward past helpless security guards, to secure the best tableside positions, it became evident that big-time chess was back in Prague.

About Havel and his chess, I knew nearly nothing; only that he had been imprisoned, and that political prisoners tended to play incessantly in prison. It was their means of communication. When the guards were far away, they would exchange information; when they were close by, they talked chess moves.

As a writer, Havel is impulsive, intuitive, a risk-taker, a dreamer.
As a politician, he is a pragmatist, conciliator, a seeker of consensus.

I wondered which man we would be playing. We shook hands all around. The president of Czechoslovakia pushed a white queen pawn forward, and the game was on.

Kok and I played well initially. By the ninth move, two things were clear: Havel knew how to play the game, but he was no expert. He had doubled up his pawns, cramping his queen and bishop, limiting his options. He was very likely heading for a loss.

I offered a draw, a diplomatic resolution. Havel smiled, said nothing and answered by capturing a pawn. So we were playing the playwright, not the politician.

Kok was a little nervous. I think he began to suspect that it was actually three Czechs against one Belgian, since I could understand what the two gentlemen from the Prague Castle were whispering feverishly to each other across the table - and I was clearly more interested in a graceful solution than a win.

Kok wouldn't mind a peaceful solution, but Havel was in for a fight. After our 13th move, I again offered a draw, and Havel again declined it with a move of the hand. He advanced on a knight so impetuously that he forgot the rules, pushing a pawn one space farther than it was legal. His adviser smilingly pulled it back. But Havel had clearly decided on a strategy - he wanted that black knight - and he pursued it. It was risky, perhaps foolhardy, but he pursued it.

Coincidentally, his lapses at the beginning of the game were working in his favor now; in a sense, two wrongs had made a right. Because he had doubled up on his pawns, his rook was now clear, in a position to threaten our king.

There are moments when the game of chess takes over, when one does not notice the noise or the crowd. When one forgets his daily problems, does not think about the future or the past. This has happened for Kok and Havel. It was their game now. Krizan and I did not speak to each other, or exchange signs, but we simultaneously sensed it was time to let whatever would happen, happen.

Havel created his first mating threat, but Kok saw it and prevented it. After white's queen aggressively moved forward, the Belgian moved to shield his pawn, completely overlooking that his knight was also in jeopardy.

Havel didn't notice either, though. No piece was taken.

Neither Krizan nor I interfered. It was unsound chess, but good drama.

On move 20, Havel protected his pawn with his rook. It looked innocent, but it contained a trap. Kok impulsively attacked the rook, and Havel moved on black's queen. It seemed the queen could not remain where it was. It would have to retreat, forcing the loss of the knight.

Kok peered up at me uncertainly.

"It doesn't look good," he said, and I agreed, as solemnly as I could. 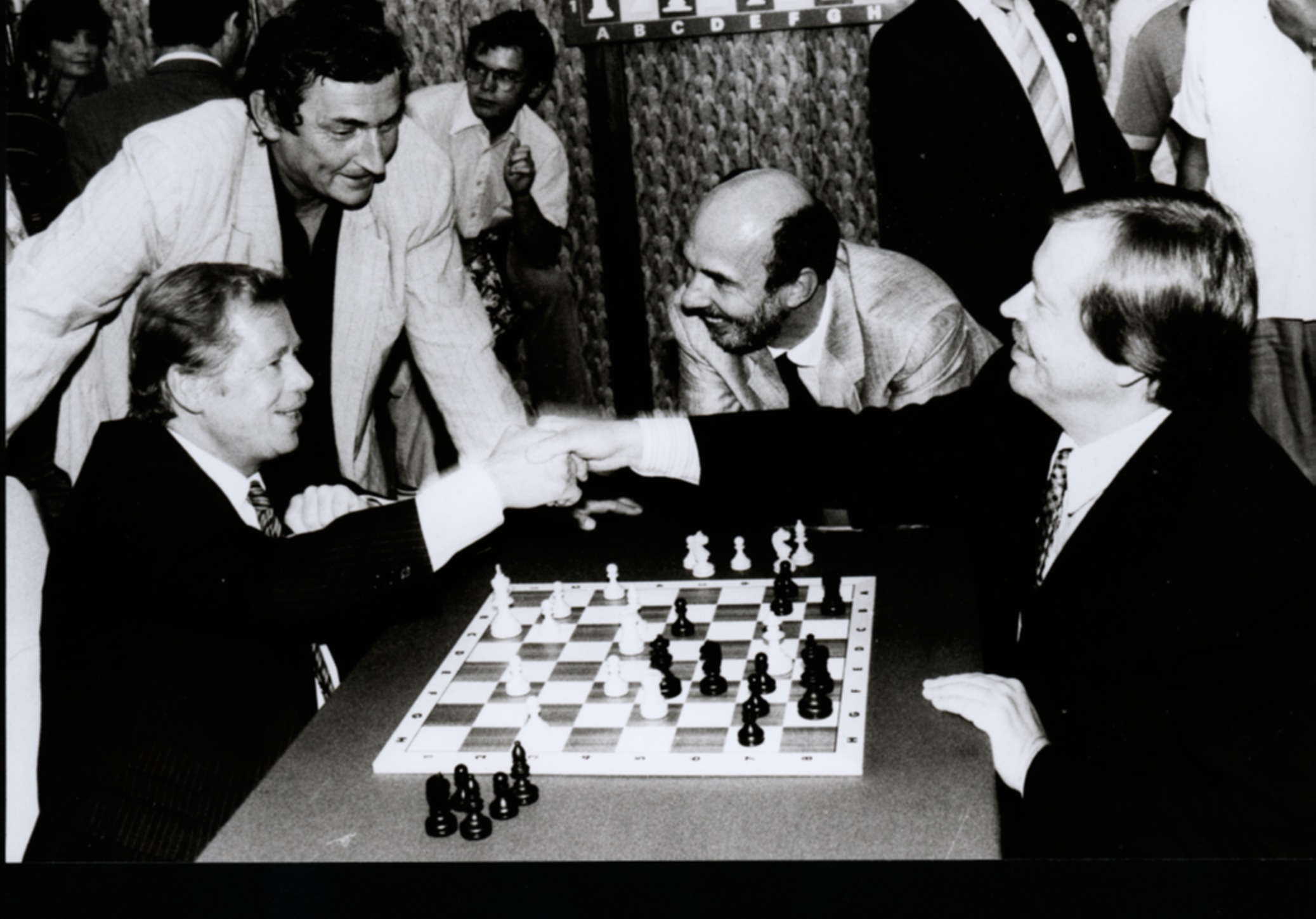 Kok held out a hand and Havel took it. Perhaps in the final position Kok had a way out, but it was irrelevant. The game lasted 15 minutes, and Havel's 15-minutes of chess fame could not have been written better either by him or by his advisor, the screenwriter Krizan. It was a spontaneous, impromptu performance, a perfect drama played in front of TV cameras.

The next day, perhaps, the president of Czechoslovakia would return to the grave business of being a statesman in a young democracy struggling to define itself. But for a moment, he was grinning, just like a slap-happy kid.

The game became known throughout the world. Havel never played in public again. He and Bessel Kok became good friends. Kok lives in Prague with his wife and son. He is a member of the Board of the Vaclav Havel Library Foundation and honorary member of the VIZE 97 foundation. He was also instrumental in staging Havel's last theater play "Leaving." Jiri Krizan died in October 2010. 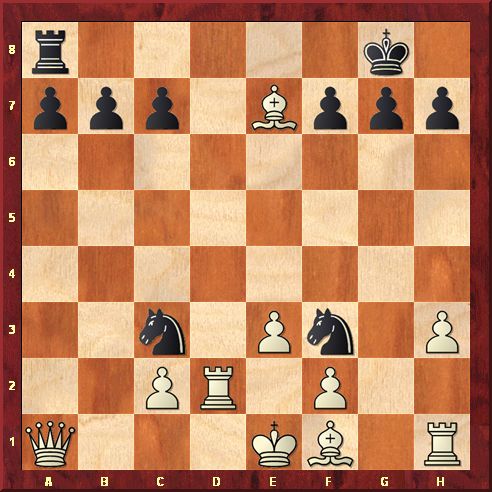 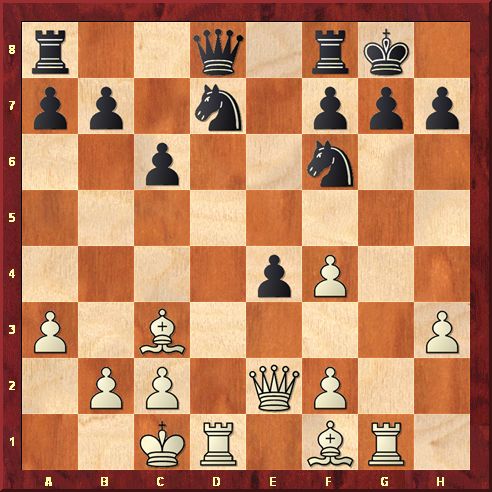 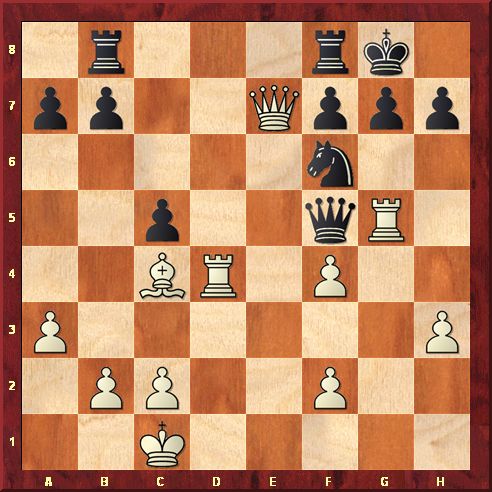 ("It's hopeless," said Bessel and thinking he must lose the knight, offered Havel his resignation. However, after 21.Rg5 black can minimize his losses with 21...Rbe8! 22.Rxf5 Rxe7 23.Rxc5. White is a pawn up, but black can still fight.)
Black resigned.