Robert Byrne, a prolific chess writer and one of the strongest U.S. grandmasters, died Friday, April 12, 2013, a few days before his 85th birthday.

He was a World Championship Candidate, U.S. champion and played for the U.S. team in nine chess Olympiads. For 34 years, he wrote an exceptional chess column for the New York Times.

Robert Byrne and his brother Donald belonged to a circle of New York players around Jack Collins, who was the mentor of talented Americans that included William Lombardy and Bobby Fischer. Both Byrne brothers became university professors and didn't have a lot of time for chess. Robert decided to become a professional player rather late - in his forties, when most of today's top players think about retirement.

I witnessed his transition from teaching philosophy at the Indiana University to professional chess. I saw his craft during his best years in the 1970s, playing against him in the U.S. championships and international tournaments and playing next to him in four Olympiads. 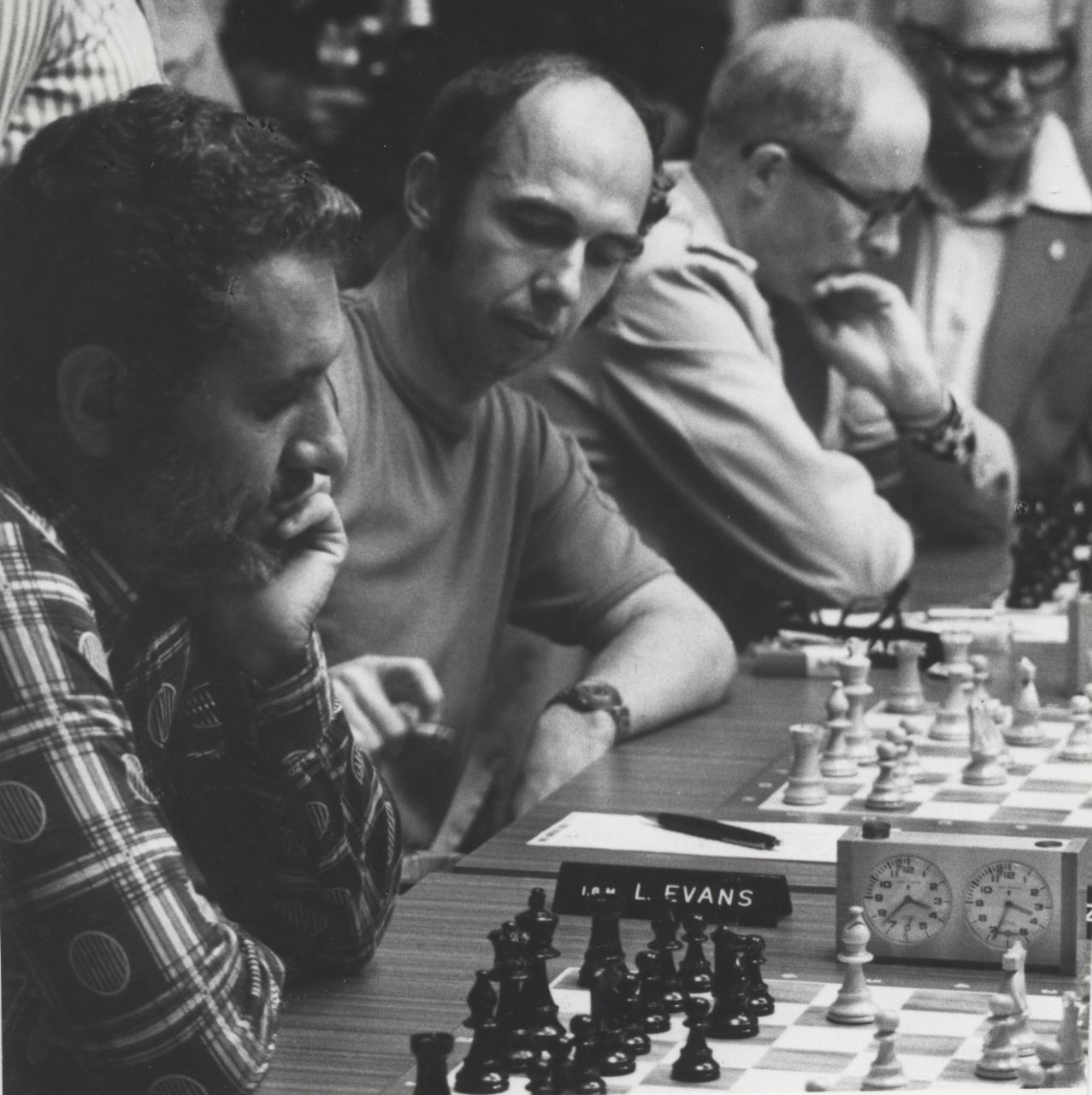 Robert Byrne was at the helm when the U.S. team won the gold medal at the 1976 Haifa chess Olympiad. From the left: Larry Evans, Kavalek, R. Byrne

Our paths crossed frequently during that decade. In 1972 we shared first place at the U.S. championship together with Samuel Reshevsky before the Fischer chess wave overwhelmed America and the world. We went to Reykjavik to witness and report on the historical match Spassky-Fischer. Robert covered it for the Chess Life and Review, at the same time preparing his book Both sides of the Chessboard, co-authored with the Estonian grandmaster Ivo Nei. From Reykjavik we traveled to Skopje for the chess Olympiad.

October 10, 1972 was a memorable day for Robert Byrne. It changed his life significantly. The New York Times appointed him as chess columnist and he wrote his first weekly column from Skopje about my victory against Florin Gheorghiu of Rumania. For the next 34 years, many chess readers enjoyed his excellent analysis, vivid storytelling and thoughtful essays on the game.

His most successful year was 1973. Byrne won the U.S. championship playoff in Chicago and went on to finish third at the Leningrad Interzonal behind Viktor Korchnoi and Anatoly Karpov, qualifying for the Candidates match against Boris Spassky. He asked me to help him prepare for the match and be his analyst of the adjourned games, but Spassky played too well in San Juan in January 1974. In the next Interzonal in Biel in 1976, Byrne missed the qualifying spot by a half point.

Robert and I played international tournaments together in Europe in the late 1960s and became friends, exchanging letters before I came to the United States in 1970. We analyzed openings and shared other chess secrets. He was a deep thinker, inventing his own variations and lines in different openings. He derived pleasure from original moves he prepared and injected into his games.

He introduced me to America and its chess life. "Nothing here is close," he said when he drove me from Indianapolis to Chicago for my first open tournament. By the end of the journey I knew far more about my new adopted country than I could have imagined. He was a wonderful storyteller with a great sense of humor, but he seemed to be teaching all the time, explaining with patience the smallest details. He talked slowly, deliberately, weighing every sentence. He was as methodical in his talk as he was in his play and analysis. A heavy smoker, he treated his cigarettes with elegance. It was the only way to know that he might be nervous. He looked calm during the games, but behind those eyeglasses was a fierce competitor. He was a great asset to U.S. Olympiad teams: poised and composed all the time, he brought stability and confidence to the team. 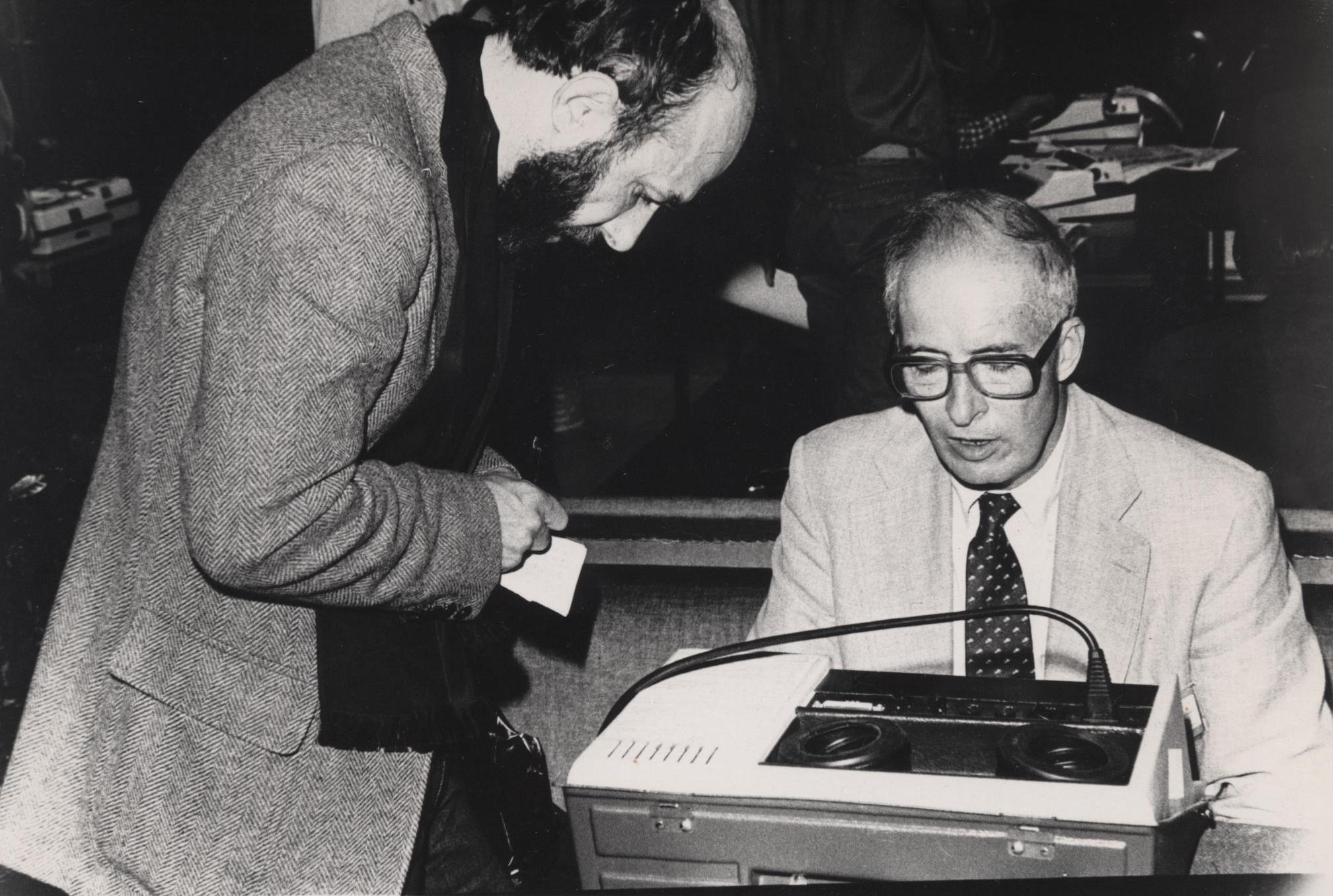 Byrne was traveling to major chess events with his big typewriter. He transmitted his articles to the New York Times by plugging his phone into it. In 1981 in Merano (photo above) we covered the world championship match Karpov-Korchnoi. Those days, a plain small notebook, typewriter and phone was all you had. Analysis had to come from your head. It was still the case when I began writing for the Washington Post in 1986.

Byrne was a positional player and valued sound pawn structures. He was also a stubborn defender, mastering Nimzowitsch's prophylaxis: anticipating opponent's attacks ahead of time. But he sharpened his style, shed off the Closed openings and in the 1970s became a dangerous king-pawn player. He had an all-around understanding of the game, evident in his writing. Here's what he said about combinations:

"The hardest facet of chess to grasp, not only for the beginner but also for the master, is combinations. Unlike strategy, which is describable in terms of abstract principles, combinations do not generally appear in repeatable patterns.
It is quite true that developing an eye for combinations is as much a visual matter as learning the moves of the pieces. Combinations are complex sequences of elementary tactics, often branching out in many directions. Because they are so concrete, so germane to the specific positions in which they occur, they must be learned by example."

At the 1965 U.S. Championship, shortly after he became a grandmaster, Robert Byrne created the following incredible combination. 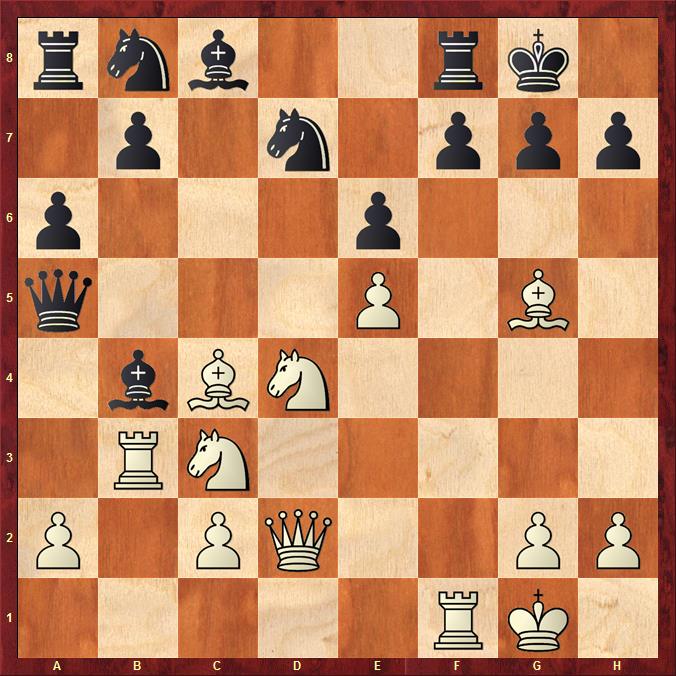 This position was reached from the Poisoned Pawn variation in the Najdorf Sicilian. Byrne unleashed a furious attack, sacrificing three light pieces, against one of America's toughest defenders.

Sacrificing both knights, Byrne finds a spectacular way to activate the rook on b3 and bring it to the kingside.

The black king is still under a mating attack.

Byrne finds a beautiful queen transfer to the square e5.