Magnus Carlsen won the Zurich Chess Challenge, the first tournament he played as the world champion. It was an amazing event, a chess triathlon, with the superstars showing their skills in blitz, rapid and classic chess, the latter being the most important.

Undefeated, with three wins and two draws, the Norwegian grandmaster finished the classic part a full point ahead of the Armenian Levon Aronian.

Looking at the crosstable, Carlsen's victory may seem easy, but, in fact, it was hanging on one game -- a swing game against the American Hikaru Nakamura, who was rated for the first time as number three in the world. A loss by Carlsen would have injected a new life into the event. 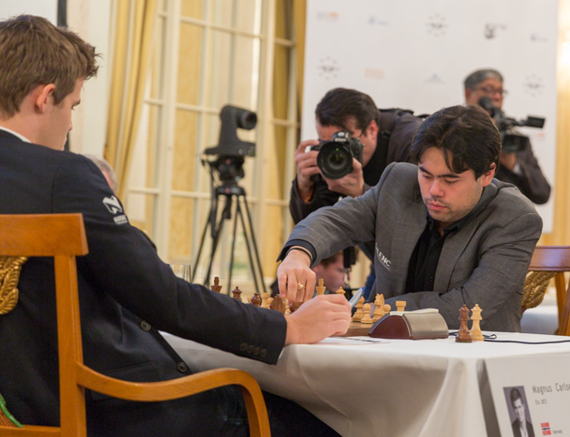 Nakamura never beat Carlsen in classical chess, but he came close in Zurich. Choosing the same variation against the Nimzo-Indian defense that gave Carlsen problems in the world championship match against Vishy Anand, Nakamura outplayed his opponent. There were no obvious blunders on Carlsen's part, perhaps just a string of inaccurate moves, a strategic plan going slightly awry -- but it was enough to land him in trouble. 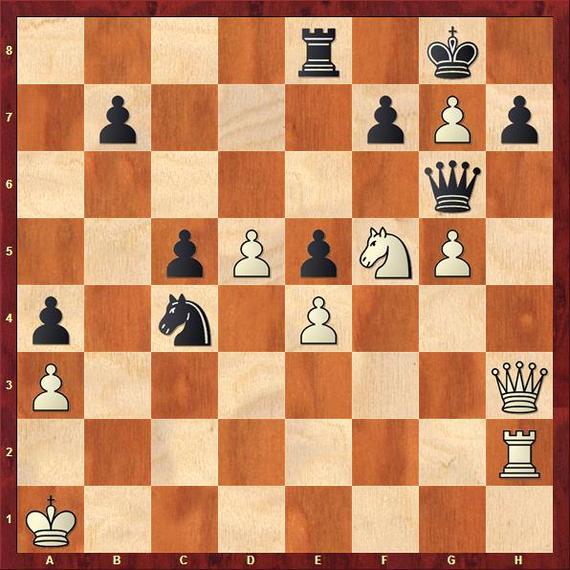 The pawn advance wins a piece, but not the game.

A complete turnabout! Not only is the open d-file more important than the knight, but white doesn't have many options. Hikaru had either overlooked black's last move or he underestimated the consequences.

Eliminating 41.Qe2 and threatening 41...b5, Magnus is turning the game around.

Black has simply too many pawns for the knight. The game concluded:

Asked how he could have survived, Carlsen said that he tried to keep the game going one move at a time. "If you keep fighting, you will be rewarded," he explained.

Carlsen's best game - a beautiful, simple composition - was against Fabiano Caruana. The American-Italian grandmaster won the last day's rapid tournament, sharing second place with Aronian behind Carlsen in the combined classic and rapid events. Carlsen shared first place with Aronian in the blitz tournament on the opening day.

There is a new trend in chess sponsorship as more and more rich Russians underwrite major chess events such as the World Cup and the World Championship. Oleg Skvortsov was the main sponsor in Zurich.

The newly elected president of the Russian Chess Federation, Andrey Filatov, staged the 2012 World Championship match between Vishy Anand and Boris Gelfand at the State Tretyakov Gallery in Moscow.

Following his example, the Dutch organizers also connected chess and art last month, moving one round of the traditional Tata Steel tournament to the Rijksmuseum in Amsterdam. 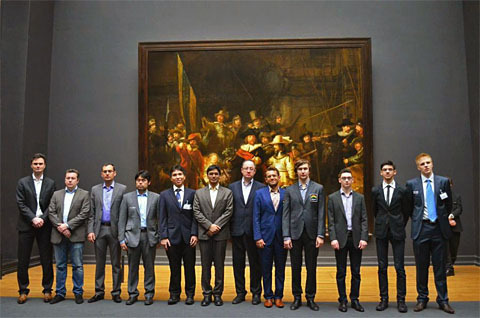 On that special day, two highest rated players of the event, Aronian and Nakamura, played against each other. 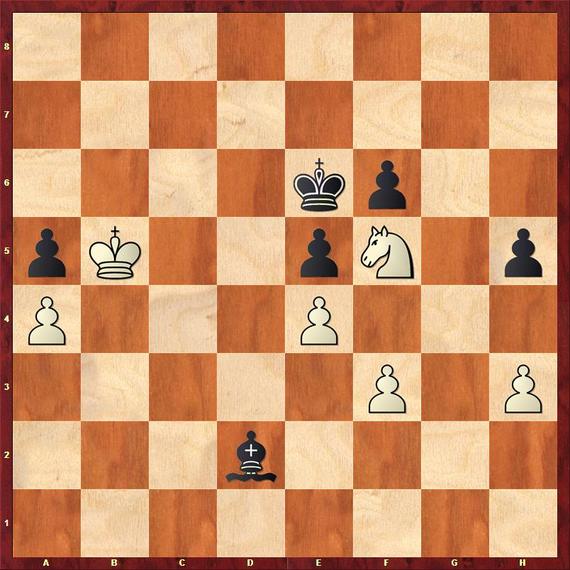 The position looks favorable to white as he dominates the board and threatens to pick up the pawn on a5. Black has one thing going for him: he can try to infiltrate the kingside. Unfortunately, his king runs the other way, unable to recover.

Aronian dominated the Tata Steel tournament and led by two points before the last round. Although having had the possibility to increase his lead and setting a performance record of the event, he collapsed against Loek Van Wely. Even the world's second best player can be vulnerable to a one-move blunder. 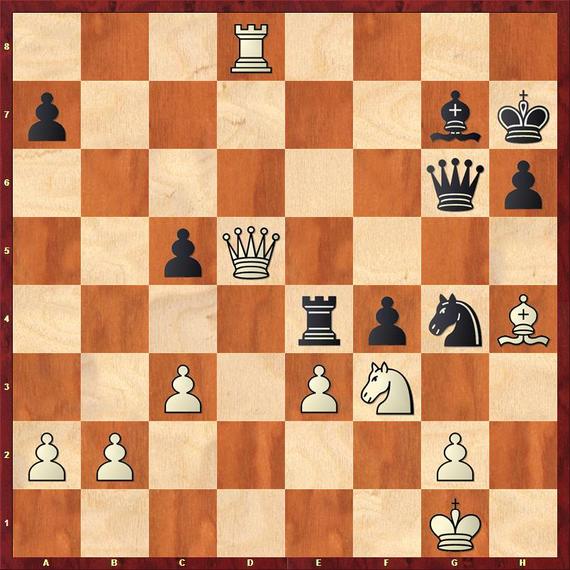 White is threatening 38.Qg8 mate, but Van Wely can cover it and create his own threats.

Sometimes the players don't even notice that something went wrong and others cover up their crime. When a former world champion and the all-time best woman made mistakes, their blunders disappeared. Here is the tale:

In early February 1993, I went to Lucerne to represent Nigel Short at the FIDE bidding for his world championship match against Garry Kasparov. The results were not encouraging: Kasparov's supported bid of one million Swiss francs came from the Galician town of Santiago de Compostela. But there was an incredible bid of $5 million from Jezdimir Vasiljevic. It was the same amount Vasiljevic put up for the 1992 match between Bobby Fischer and Boris Spassky.
I flew to Budapest to check it out since Vasiljevic was the main sponsor of the match between Spassky and Judit Polgar. He came to the lobby of the hotel with his bodyguards.

I asked him: "Are you really going to sponsor the match Kasparov - Short?"

He laughed: "Oh, Kasparov, Kasparov. He should be careful. One day he may try to cross a street and he may not make it to the other side."

Vasiljevic was never going to sponsor anything Kasparov. That was clear. His phantom bid was used by Campomanes to gain time for the upcoming offers from England.

Polgar played well and clinched the match victory early. Spassky won the meaningless last game, narrowing the loss to 4.5 to 5.5. Afterward he told me: "I think I did something today I shouldn't have done. I switched the moves, but I was not punished." The punishment could have been swift: a bishop sacrifice would have won material, forcing immediate resignation. The game would have lasted just three minutes, surely a record among top grandmaster games.

I wrote about it in my Washington Post column, but I later found out that the moves were altered. Perhaps not to embarrass the players, the organizers put out another version of the game, the one you can find in the databases. In their account the horrific blunders were eliminated and made my story not credible.

Fortunately, Judit Polgar came to the rescue. In her new book From GM to Top Ten, published by Quality Chess, she acknowledged what happened: 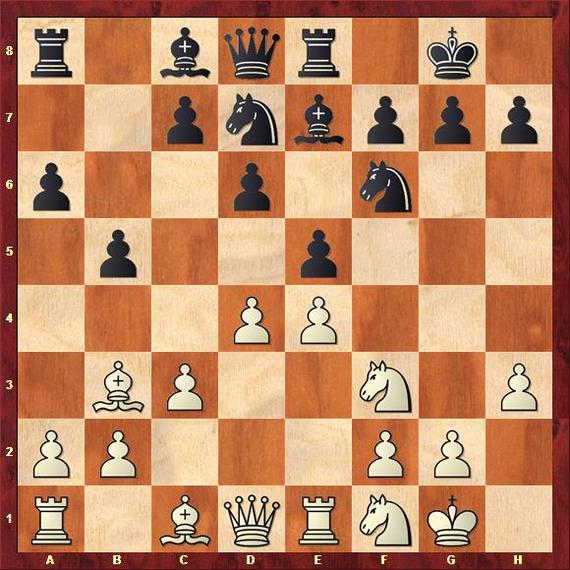 I played this move without hesitation. It was as if I was coming home from the grocery store on the same road I had traveled so many times before, without noticing there was a new traffic sign forbidding my access.

I believe Boris realized that he had blundered right away. This is a common situation, but I am very surprised that I was not aware of the missed opportunity until the end of the game! With his last move, Spassky allowed the simple combination: 12.Bxf7+! Kxf7 13.Ng5+ Kg8 14.Ne6, trapping the queen. Boris might have thought that he had already played Bc8-b7, which would free the queen from its cage.

The game transposed to our main line and soon became quite interesting. Boris sacrificed a knight for my two central pawns and eventually won, although later analysis showed that I could have held a draw. 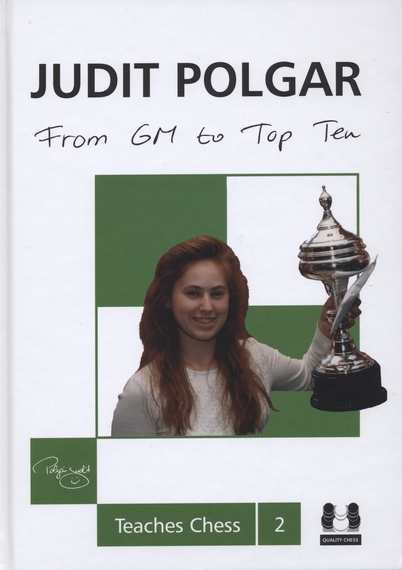 Polgar's chess is impressive in her new book, the second tome of her three-volume manual. It is also spiced up with amazing stories. And you would not expect less from a lady who got a marriage proposal on Machu Pichu.