It's been a long time coming, but a rescue dog is finally home, sweet home.

Chester the pit bull had been living in rescue shelters for 5 years. He was most recently staying at the North Fork Animal Welfare League's (NFAWL) shelter in Long Island, New York with no luck finding an owner, Gillian Wood Pultz, executive director of NFAWL told the Huffington Post in an email. Taking a unique approach to help get Chester adopted, group manager Gabby Stroup and volunteer Valerie Sanks decided to post a picture of him posing with a heartbreaking sign to the NFAWL's Facebook page.

Poor Chester is still waiting 5 years being overlooked!! He is a sweet guy who loves to lay on the couch. He likes most other dogs . 631-765-1811 ext 1 or manager@nfawl.org

“Why doesn’t anybody want me? I’ve been waiting 5 years. Everyone at the shelter tells me what a good boy I am. So why has no one adopted me? I promise to be good and love my new family. Please maybe you are my new family... I sit and wait for you to come.”

The picture, which was originally posted last Wednesday, quickly went viral with over 20,100 shares on Facebook as of Monday afternoon. Inspired by the popular post, Stroup also created a Facebook page dedicated to the pup's adoption journey.

I think I'm getting closer to finding a family!!!! Thank you to everyone who is sharing me!! Even when I find a home I...

Posted by Chester Waiting for five years on Friday, April 3, 2015

The pooch's buzz on social media paid off and hundreds of people across the country called in to the shelter, asking about the canine, according to Southhold Local. Chester finally ended up catching the attention of owners who Stroup called the "perfect match" -- Michigan couple Dana and Adi Dor, and their sons, Aidan and Brandon-- who brought him home last Saturday.

“We saw him and we felt connected," Adi told Southhold Local. "It was meant to be.”

Though Chester has a sweet personality, Pultz told the HuffPost that the reputation surrounding his breed likely had to do with his lengthy stay.

"So many wonderful pit bulls get overlooked at shelters," Pultz said.

Chester is now living happily in his new home and though it took him a while to get adopted, Pultz told HuffPost that the experience has shown the organization the positive power of social media. She hopes that the interest in NFAWL can help get more of their shelter pets loving homes.

"We have had a large increase in the volume of phone calls and emails. We are hoping this transfers into adoptions for some of our other long term residents," Pultz said.

'Why Doesn't Anybody Want Me?' Pit Bull Finally Gets A Home After Heartbreaking Picture Goes Viral
Why Fostering A Shelter Pet Is Basically The Best Thing In The World 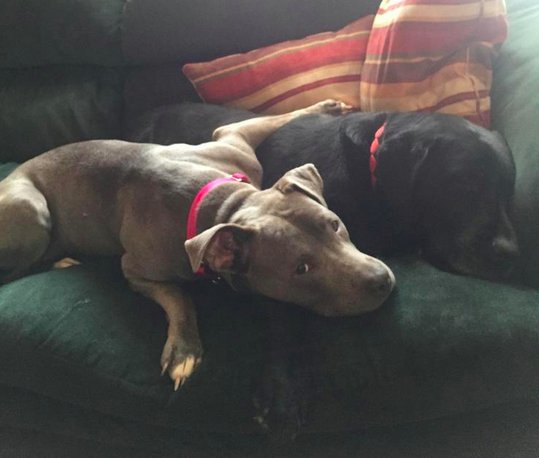 1 / 16
Foster Pets Learn They're Loved
"Watching a dog that has been in a shelter environment, or hurt, or abused or all of the above enter your home is a magical, beautiful thing," writes regular fosterer Tamera Jackson <a href="http://www.pmarinc.org/for-the-love-of-dogs/#lightbox/2/" target="_blank">on the Pibbles & More Animal Rescue blog</a>. "Though they may not be settled, yet they surely seem to know they are safe and, yes, loved."
Tamera Jackson