What is happening to Gaza isn't fair but sadly that is the only way sometimes terrorist organizations and their supporters learn to behave.

It was hastily followed by:

I do think Israel has made its point though. Wish it would stop now and bring peace talks on the table again.

Isn't it interesting though how so many rich Islamic countries in the region don't say a word or intervene when Gaza is attacked.

But the damage had been done, and the Twitterverse was on fire.

Although not as well known abroad, Chetan Bhagat is famous and influential in India -- a divisive literary figure of questionable literary-ness. He has written five bestselling works of fiction -- three of which have become highly rated Bollywood films. He has over 8 million social media followers, is a writer of op-ed columns and frequent speaker at various public events. In 2011, Time magazine named him among the 100 Most influential People In The World.

The day after the Twitter incident, Bhagat wrote an op-ed for HuffPo in which he said:

"English is the new caste system, complete with levels of proficiency translating to various levels to elitism. However, because I write in simple English, my books have managed to be a bridge between Indians who speak English well and Indians who speak little English."

For those who are familiar with Bhagat's work, particularly his non-fiction, neither the op-ed, nor the Gaza tweet should not come as a surprise. They are also closely related. 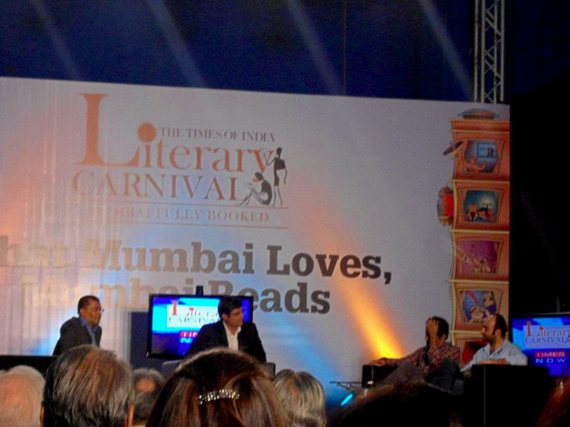 Like many young Indians, I too was a long-time fan of Mr. Bhagat's fiction when I had the opportunity to meet him in person at the Times of India Literary Carnival in Bombay in 2011. After panelling a discussion at the famed Mehboob Studios, he stuck around to speak to young fans and detractors waiting for him outside the auditorium. In that meeting, he made clear a lot of views about his writing philosophy he has since continued to echo.

In person, Bhagat had easy-going persona and was open to criticisms of the genre he wrote in. One girl in particular was very vocal critic of the fact that many of the "new age" Indian English books had poor grammar and spelling mistakes. He reassured her that he was a good person with noble intentions. He wasn't motivated by money -- he had quit a high paying job in Hong Kong to shift base to Mumbai to write full time. He wasn't a snob -- despite his successes, he was taking the time to talk to us. Many of his readers were semi-urban, semi-literate, working class individuals. He wanted to be accessible, a writer of the people.

He was certainly accessible! However, hearing him speak, I couldn't help but be reminded less of an authoritative writer and social critic with gravitas, as of an IITian engaging in, pardon my French, "wing fart."

Bhagat is an "IITian" in that he is alumnus of the Indian Institute of Technology (IIT) -- a chain of top engineering schools in India. He describes his time there as "a turning point" in his life and it was the subject of his first bestseller Five Point Someone, later adapted into the Bollywood blockbuster 3 Idiots. With an acceptance rate of about 2 percent, low fees, top facilities and world famous alumni, IIT is practically a motif in the nation's collective consciousness, enjoying the kind of pop cultural reference and prestige as Oxbridge or the Ivy League. A "wing fart" debate is popular IIT slang for the kind of casual dorm-room debates that happen in your hostel wing that prize personal popularity, insulting your opponents, Wikipedia references, logical fallacies and loud volumes in winning an argument. Context, logic, facts, language, articulation, style are all subordinate to the above. I couldn't help but wonder about the extent to which this influence informed his present spirit and style of debate.

It was a disconcerting thought to have about a writer I admired, and one that was sadly reinforced upon reading "What Young India Wants" -- a compilation of his op-ed columns that touch upon a kaleidoscope of social issues. In the prologue, he admits he has a long way to go as "a thinker, opinion maker and writer". However, that doesn't deter him from writing about a range of issues -- spanning political corruption, education, secularism and the ever elusive "Indian" values. He builds several arguments on apparently self-evident premises, shoddy sourcing, emotional plugs and humor. And he often offers solutions to complex issues because "If I offer no solutions then all I am doing is ranting. We must always suggest a way out, however simplistic it may be. It is a more positive attitude towards life,"

It is important to note that Bhagat's popularity has a lot to do with who he is as well as who he is not. As a public figure, he isn't perceived with the same suspicion as a potentially corrupt politician or an agenda-driven social activist. As a writer, he doesn't speak English with the clipped accent of the so-called literary elite or write it in an alienating canonical style. He isn't an anglophile writing for a Western audience, nor was he born of wealth or familial connections. Chetan Bhagat is self made. He speaks the language of the masses, and in a sense, he is the masses. He could be your cool, young uncle or someone you grew up with, who has it made. He is an alumna of IIT and IIM -- top engineering and management institutions in the country and a middle class Indian dream. Familial pressures forced him into that career path, but he was eventually able to follow his passion -- writing. He lived abroad for sometime but returned to India. He had a love marriage with his college sweetheart. Bhagat is aspirational and yet, despite his many successes, he is accessible. He is solid and safe and trustworthy, and many, many Indians of all ages and backgrounds, take him and his opinions seriously.

Some years ago, he had told the New York Times: "I think people really took to [my] books mainly because there is a lot of social comment in there...It's garbed as comedy."

Writing in a colloquial, accessible manner about important social issues that truly connect with the everyman is a positive thing. It is something a lot of writers could learn from from Bhagat. However, it is just a first step. In form, writing simply is different from but inherently no better than writing in the so-called inaccessible, elitist literary style Bhagat denounces. Writing about slick urban Indians working in MNCs is inherently no superior to writing about villagers climbing coconut trees.
**

Ultimately, the content and the message matter. What is the nature of the social commentary Bhagat peddles to Indians, if not to the West? Bhagat's accessibility and trustworthiness, and indeed, his popularity, sometimes make it difficult to detect or denounce the serious lapses in his judgement.

In a country with so much violence against women, he compared the rupee's fall to rape. Right before the Gaza tweet, he tweeted: "I think if a hot girl wore a dhoti, a pub would be mad to not allow her entry." He is a benevolent sexist whose opinion columns and non-fiction could well implicate him for being a lazy thinker and a flake.

Of course Mr. Bhagat is entitled to sharing his wingfart-ey opinions, disguised as serious commentary. But being the role model and public figure that he is, this kind of carelessness is dangerous -- he gives people the signal that it's okay to indulge in a similar lack of empathy. His readers, in his own words, are a vulnerable segment of people who apparently rely on his arguments to make up their mind.

When the backlash began pouring in, he refused to substantiate his stand or apologize, reminiscent of the time he defended his rape joke:

Instead, he claimed he was being misinterpreted, denounced the pseudo-liberal-intellectual-elite thus positioning himself as being for the intolerant-unintellectual-masses and attempted to change the topic, and the collective mood of the masses with: "Anyway, those who agree great. Those who don't, let's respect all views and agree to disagree and move on already. Chalo, ho gaya ab." Within 24 hours of dropping his polemical Gaza bombshell, he went on to indulge in some promotional maza (fun) with Bollywood actress Jacqueline Fernandez (#Gazatomaza anyone?)

As the civilian death toll in Gaza continues to rise, an Israel-Gaza ceasefire is called for, and the Indian government remains cautious about its stance, even hardliners in the international community refrain from condoning harm to innocent civilians. Meanwhile, Bhagat has moved on to promoting his film. In his latest tweet, he shares an interview where he pronounces the actor Salman Khan (accused or charged of harassing Aishwarya Rai, drunk driving and shooting endangered blackbucks) "a thinker". This has of course, led to a new barrage of social media responses. Bhagat might have moved on, but thanks to his wide reach, the impact of his statements threaten to endure in insidious ways.

"To change India, we have to change the mindsets of Indians," he waxed eloquent last week.

As you yourself might say, Mr.Bhagat, such change must begin at home.