To defend itself in a major environmental lawsuit in Ecuador, it appears that American oil giant Chevron is employing methods -- and people -- that are as dirty as the toxic waste pits it left scattered across the rainforest floor.

In early September, I wrote here about a dramatic last-ditch attempt by Chevron to monkey-wrench legal proceedings in Ecuador over massive oil contamination in the Ecuadorian Amazon. Chevron is facing up to $27 billion dollars in damages to clean up what has become known as the "Amazon Chernobyl," where tens of thousands of indigenous people and campesinos suffer an epidemic of cancer, miscarriages, birth defects, and other ailments.

On August 31, just weeks before a final judgment had been expected in the case, Chevron posted on YouTube what at first appeared to be a "smoking gun" spy video, which Chevron said showed the judge in the case ensnared in a bribery scandal.

Except, as I wrote before, it didn't:

The company instead revealed videos showing a former Chevron contractor named Diego Borja and an American businessman named Wayne Hansen, who appear to be trying fruitlessly to entrap the presiding Judge, Juan Nuñez. Borja and Hansen secretly shot the videos themselves using a spy-camera pen and watch they bought in a catalog.

In the videos, Borja introduced Mr. Hansen as an executive of an American groundwater remediation company willing to provide a kickback for a government contract to clean up the oil contamination left behind by Texaco, now Chevron. The California-based oil giant claimed the videos showed obvious government bias, corruption and judicial misconduct and called for an annulment of the judge's rulings in the case.

As The New York Times wrote:

The two mysterious businessmen, who used watches and pens implanted with bugging devices to make the recordings, have refused to explain their motivations for going to the furtive meetings in Quito and a jungle outpost to discuss a bribery plot. And now, with questions mounting, one of them has enlisted a lawyer who has represented Barry Bonds.

The article doesn't mention that Chevron agreed to pay for both Borja and Hansen's criminal defense lawyers, though it does explain that the company had paid Borja, its former contractor, "an undisclosed amount for moving and living expenses so he could safely move his family out of Ecuador."


And now for the latest bombshell. 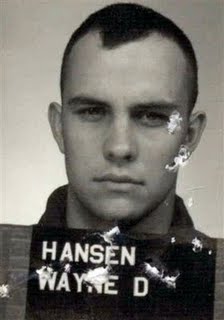 "American businessman" and "remediation expert" Wayne Hansen is neither. Rather, he is a convicted felon and drug trafficker, with a "litany of legal troubles," according to the Associated Press.

Court records show that Hansen, 62, pleaded guilty to charges of facilitating the importation of marijuana in a 1987 case in Brownsville, Texas. A co-defendant said that Hansen was in charge of buying a DC-7 that prosecutors alleged would be used to fly 275,000 pounds (124,740 kilos) of marijuana to the United States from Colombia.

Hansen, a U.S. citizen who served 19 months in federal prison in that case, also lost civil lawsuits charging him with unleashing two pitbulls on a neighbor and her golden retriever, and with tearing up the walls of another person's house with a jackhammer, according to California county court records and the plaintiffs.

And just in case you suspect that Mr. Hansen may have reformed, and is trying to make good as an honest businessman, "An AP investigation also has found no evidence that Wayne Douglas Hansen worked in his professed field of environmental remediation."

The article goes on:

In [the videos], Hansen is introduced as an American groundwater remediation executive with extensive international experience. In one of them, Borja says Hansen's company has "an exclusive franchise for Honeywell for water treatment plants."

Hansen refused to respond when asked the name of his purported company in a brief telephone interview with the AP on Oct. 15.

In that interview and in another brief conversation Wednesday, Hansen told the AP that he had water-treatment projects in Mexico and Ecuador. He also claimed he was going to build a golf course in Ecuador. But when an AP reporter questioned those claims, he hung up.

When Chevron released the videotapes in August, the company described Hansen as "an American businessman." It also said it would pay for any "reasonable" legal fees Hansen might incur related to the recordings.

Steven Donziger, the main American attorney advising the communities suing Chevron says "the real Wayne Hanson bears no resemblance to the fictitious civic-minded character created by Chevron to explain how it suddenly came into innocent possession of the videos."

Ya gotta wonder, if Hansen had no chance of scoring a lucrative remediation contract, what interest did he have sticking his neck out trying to fabricate a corruption scandal? It's also hard not to wonder what Chevron might consider "reasonable" as payment to a man willing to help derail a multi-billion dollar case against the company.

A steady stream of shocking revelations suggest Chevron's involvement with the felon Hansen may be more sinister than a case of poor judgment. 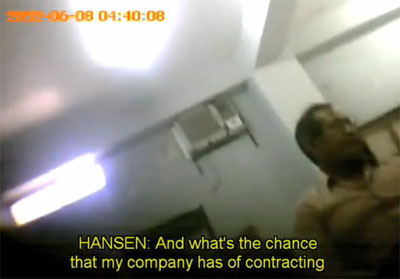 Only the day before the bombshell about Hansen's shady past (and present), Chevron admitted that its lawyers met with Borja in San Francisco in the midst of the sting operation, flatly contradicting Chevron's previous statements to Ecuador's Attorney General, as well as the press, that it had "no knowledge" of the meetings or taping until the videos were handed over to them.

In fact, Borja brought video of three previous meetings to Chevron attorneys in the law offices of big law firm Jones Day in downtown San Francisco and, just a few days later, attended a fourth meeting back in Quito. Only at this fourth and final meeting were details of a bribery plot ever discussed, suggesting that Chevron may have played a role in planning or shaping the scandal in an attempt to taint the trial, a violation of the Foreign Corrupt Practices Act, and a federal crime.

In the fourth meeting & video, the judge is not present and the "government official" who appears to talk about a bribe in return for securing remediation contracts for Mr. Hansen turns out to be a an over-zealous car salesman living in Quito who has been to some political rallies but isn't even a registered member of President Correa's ruling party.

According to Chevron's translation of the recordings, Garcia tells the businessmen he spoke by phone with Pierina Correa, the sister of Ecuador President Rafael Correa about "commissions" and confirms that $1 million will go to "the presidency," $1 million will go to the judge and $1 million to the plaintiffs in the case.

Garcia's lawyer said he is "the kind of person who likes to talk so he can look good in front of people, and that's what he was doing in that video. He has no connections." 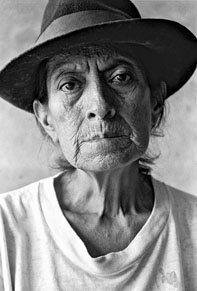 In my earlier post on Chevron's sketchy ready-made scandal, I wrote that "the whole episode raises more troubling questions about Chevron than about the judge or Ecuador's judicial process that the company has spent so much time impugning." The Amazon Defense Coalition has compiled an exhaustive list of these troubling questions that I invite you to consider.

But regardless of the answers, the most important question remains: when will Chevron quit conspiring to evade responsibility and help the tens of thousands of people in the Ecuadorian Amazon who continue to suffer the horrific after-effects of operations that made the company one of the richest on the planet?

We're building a multifaceted strategic effort to hold Chevron accountable, and set a powerful new precedent that will put oil companies' days of drill, dump, and run forever in the past. Please take action now to demand Chevron clean up its mess in Ecuador, and find out what you can do to support the Clean Up Ecuador campaign.